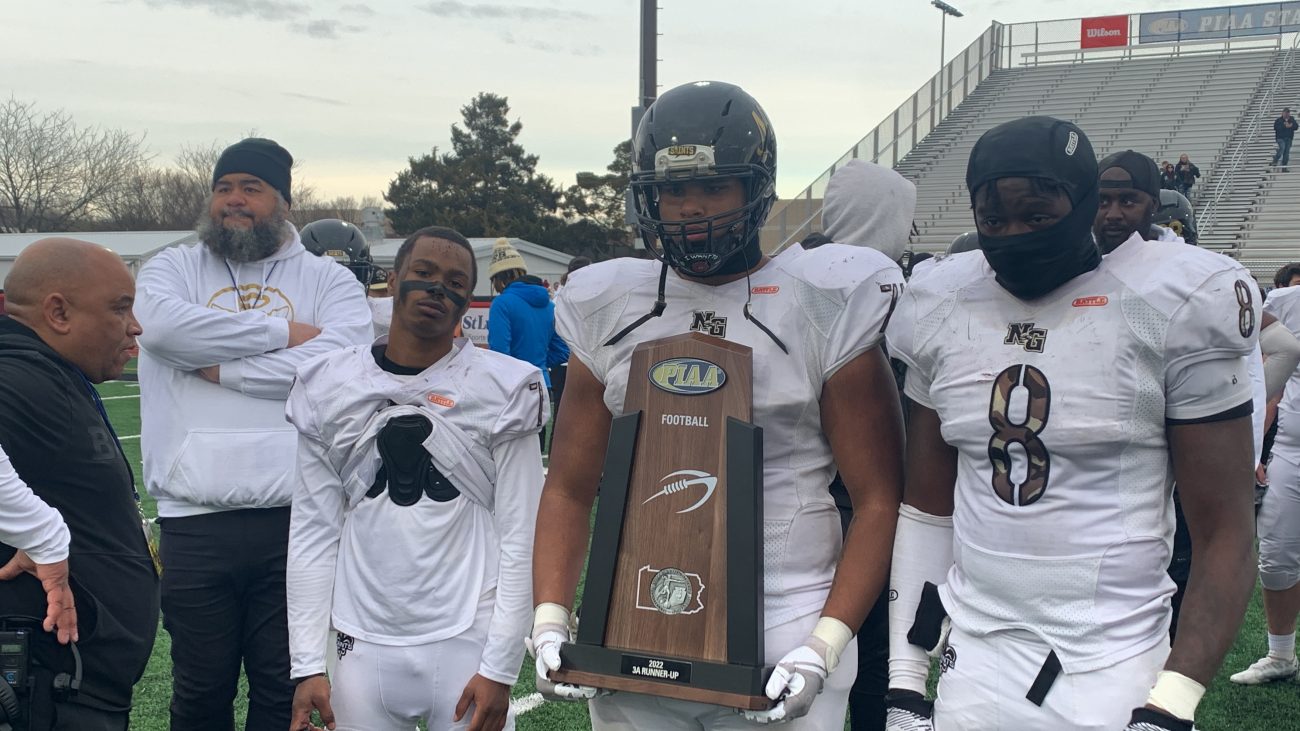 MECHANICSBURG – No matter how hard they try, the memory will always sting.

That’s simply the nature of sports.

The yard might as well have been an acre.

Despite being in position to snare a victory inside the final minute of regulation, the Saints simply couldn’t penetrate Belle Vernon’s stout defensive line, and despite a herculean performance by its own herculean defense, Neumann-Goretti lost the battle, 9-8.

About a week later, after being given some time to rest and heal, several Saints embodied the countenance of a winner. They offered honest, thoughtful reflection on a brutally difficult experience. They took full responsibility for the loss; it was maturity at its finest.

Neumann-Goretti coach Albie Crosby had reason to be proud, because whatever he and his staff preached to their young gridiron giants, they absorbed the most important lessons.

Now, with the New Year already basically two weeks’ old, those same Saints were summoned and asked if they’d be interested in supplying further insights about transitioning from sadness back to dealing with the present and the future.

Not surprisingly, each player enthusiastically responded in the affirmative.

“In my eyes, I always hold a religious gratitude,” said Rivera. “Before and after every single game, I said a prayer to myself for my team and the other team just in hopes of a good clean game no matter how intense things tend to get. I also thank God for allowing us to have the success we have had, I even thank Him for the lessons because we never failed; we just always learned something, and that’s what took us so far, so I’m thankful that God did that for us.”

As he contemplated what to do next, Rivera tried to heal “physically and mentally.”

“Give your body a week or two to catch a break and rest, and your mind will follow,” said Rivera. “This way, you can come back to the gym or next sport prepared to go and to play at the best level possible. The only time it should take longer is if there was an injury sustained in the season no matter what point in the season; it should still be checked afterwards.

“The benefit of taking time post-season is allowing yourself to totally focus on relaxing and healing yourself. Even in psychology, it is learned that we sleep to rejuvenate ourselves, heal, help our brain and body rest while resetting, and also becoming more creative. So the rest factor is important for players to get back in the weight room, get back on field workouts and, most importantly, get back to being even better in the classroom.”

First-team All-Catholic senior linebacker Sam Hobbs, who scored N-G’s only touchdown when he recovered a fumbled punt snap in the end zone, persevered while enduring a serious case of “What if’s” following the most painful athletic defeat of his scholastic career.

“Physically after a loss, you don’t need that long to heal,” said Hobbs. “Sit in an ice bath and you’ll be okay. As for emotionally and mentally for me, it took me three days to heal because I kept thinking about the plays I made over and over again. But you can’t dwell on the past, so therefore, I took it to the chin and told myself, ‘I had a great season being a leader, great teammate, and a phenomenal player.’”

As for the long haul, that’s entirely different.

“It takes a couple months to move onto the next step, which is college, because you would want to see what’s best for you such as the environment, the culture, the relationships, etc.,” said Hobbs.

“The benefit of taking some time after the season is to get your mind right all over again. If you’re a senior transitioning to college, you have to lock in mentally, physically, and emotionally to come straight in and be a dog at the end of the day going Division I, Division II, or Division III.

“As for the religious aspect, I just thank God for giving me the strength and ability to make it through all the games.”

A graduate of South Philadelphia’s St. Pio Catholic grade school and a member of St. Richard’s parish, senior center Lou Governatore might have been Neumann-Goretti’s most appreciative student after the school finished classes in late December to celebrate Christmas.

“It definitely took me a while to be able to get over this season,” said Governatore. “The amount of adversity we faced and how important it was is still just so surreal. It took me a while over the holiday break to get over it. Physically I was sore and my emotions were just all over the place.”

“I believe there is a benefit in taking some time off after the season. This is for both physical and mental health. Having some time off can help recover your body from the long season, as well as getting your mind right to face the future and for what is coming next.”

“Trusting in God and my teammates is something I can definitely reflect on. My team and I always looked towards the bigger picture and having faith brought us a long way.”