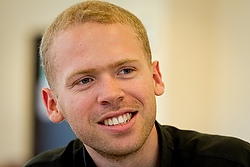 Cuban seminarian Kenny Fernandez Delgado is pictured during an interview with Catholic News Service at San Carlos and San Ambrosio Seminary outside of Havana Feb. 9. Fernandez Delgado had the opportunity to meet Pope Benedict XVI during his visit to Cuba. (CNS photo/Nancy Phelan Wiechec)

HAVANA (CNS) — Kenny Fernandez Delgado was 13 when Blessed John Paul II came to the tropical Cuban capital. His remembers little about the 1998 event other than arriving late for the Mass at Revolution Square with his mother and a brother.

Today, Fernandez is in his first year of theology studies at the new San Carlos and San Ambrosio Seminary. He called the chance to see Pope Benedict XVI March 28 an exhausting, emotional and unique opportunity.

That morning, the seminarians rose at 4 a.m., about an hour earlier than their normal wake-up call.

When the pope arrived at the morning Mass in Revolution Square, the seminarians were seated in a section close to the papal stage.

“We shouted and clapped; we were very motivated to see the pope, especially because we were promised to have a group photo with him,” Fernandez said. “Some of us could touch the pope and kiss the fisherman’s ring.”

Fernandez was informed by an Italian-speaking security official that he was not among those who would be shaking hands with the pope. However, Pope Benedict addressed the group and told the seminarians they were in his thoughts and prayers.

“It was a very emotional moment; he said he wished us well and will pray for us,” he said. “He is a very kind person, and a little shy. We also felt he was a little tired.”

Fernandez said the pope’s message at Mass was about reconciliation, which is a word Cubans almost never hear, and another word they never hear: family.

“Family is a word that is a little forgotten in the official communications, and the family in Cuba is damaged by divorces and the treatment of the problem; the responses of the state are not enough,” the seminarian said. “Benedict said families are the fundamental cell of society and for the domestic church.”

Fernandez credited his Catholic upbringing to his family, specifically his mother. He said he was the only youngster in his secondary school class who professed his Catholic faith. His mother saw to it that he and his brother were catechized, received the sacraments and attended religious conferences.

“In Cuba, almost everybody is religious in some way, but few (are) Christians, and I don’t remember any practicing Catholics growing up except some Christians from other denominations,” Fernandez said.

The 26-year-old hopes to be a parish priest, and he expects to be given three or four parish assignments as part of his pastoral preparation. Cuba has few priests, he said, so he expects to be wearing many hats.

“I dream to be a bridge between God and the people,” he said. “It is difficult to be a bridge because you have the weight of many people on your shoulders. The work of a priest is to be among the people and bring them hope that only Jesus Christ can give.”

PREVIOUS: Day of prayer and fasting to be observed today

NEXT: Religion teachers reflect on vocation to hand on the faith to children