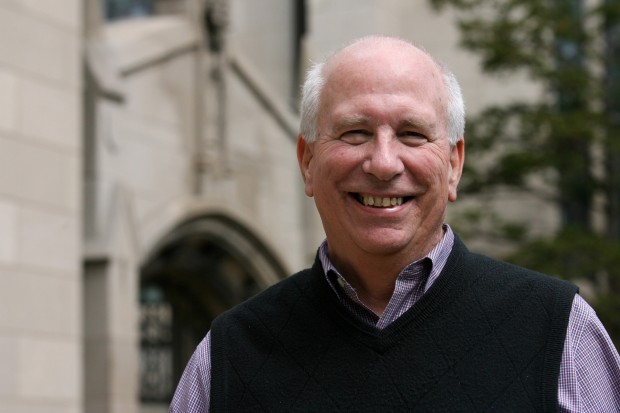 Deacon Lambert, who co-chairs the National Catholic Partnership on Disability’s Council on Mental Illness, is seen in a 2011 photo in Chicago. Deacon Lambert said awareness is essential in overcoming the stigma associated with a disease of the mind. (CNS/Karen Callaway, Catholic New World)

“For three or four weeks, every day at 6 o’clock, the bell would ring and a different family would bring us dinner,” he said.

Those neighbors and fellow parishioners were responding to a need.

But a different illness in his family some years later garnered no response.

“When our daughter was diagnosed with mental illness, no one came to the door,” he said.

That was 25 years ago, and Deacon Lambert, who co-chairs the National Catholic Partnership on Disability’s Council on Mental Illness, said awareness is essential in overcoming the stigma associated with a disease of the mind.

In the United States, severe or persistent mental illness affects 1 in 17 Americans. The mental illness disability rate has more than doubled since the 1980s and increased six-fold since the 1950s. Some clinicians and researchers believe the increase has been influenced by external factors, including environmental and social causes.

“When our daughter was diagnosed with mental illness, no one came to the door.”

Other experts theorize that a widening set of criteria for diagnosing mental illness — which was once thought to be a result of chronic or irreversible conditions — has led to a rise in the number of people living with such a disability. Practitioners in the mental health field consider the requirement for a diagnosis before pharmaceutical and insurance companies will dispense treatment as a factor as well.

When she began working with people with mental illness 30 years ago, faith issues were ignored. That is because mental health professionals were not trained to adequately respond when a patient spoke about spirituality, she said.

“It was really unheard of in 1981 to have anyone suggest that it would be worthwhile to have a conversation with people with serious mental illness about religion because up until then, it was really just seen as part of their symptoms or a defense,” she said. “Either people pathologized it or they ignored it.”

Contrary to the prevailing belief that faith was a part of a patient’s mental illness, Sister Nancy soon discovered that it was often part of an individual’s inner strength. She then organized a group for people who wanted to talk about mental illness and religion. The group meets monthly at St. Paul Parish in Cambridge, Mass.

When someone struggles with a severe mental illness, they often feel isolated. Their behaviors may put others at a distance, and they may have difficulty holding a job, keeping relationships and living on their own.

Catholics can help by creating safe havens for people to talk about their mental illness and allow their faith to be part of their healing.

Deacon Lambert said that many people at Sunday Mass privately struggle with mental illness and the vast majority are managing their illness well.

“Nobody’s going to come up and say, ‘Well, I have schizophrenia, but I go to work every day, I hold a job, I have a marriage.’ But I guarantee there’s a lot of people who are in that situation,” he said.

As “people of compassion and justice,” Deacon Lambert said, Catholics can help by creating safe havens for people to talk about their mental illness and allow their faith to be part of their healing. Even a prayer intention at Mass may spark hope, he added.

In reaction to his daughter’s diagnosis, faith played a significant role, the deacon said.

“(Our faith) was crucial in getting us through that,” he explained. “Through prayer and turning things over to the Lord, saying we’re going to deal with this situation with the strength and hope that comes from God and our faith. That’s really what got us through, quite honestly. It’s as simple as that.”

Father Rodney Thibault, director of the Diocese of Fall River’s Pastoral Care of the Sick program, said his work in hospital ministry has brought him in frequent contact with people whose mental illness has led to their admittance to the psychiatric ward, often because they are battling suicidal thoughts.

“I have found that people really do reach out, and they seek the presence of God in their lives in a moment like that,” he said. “Usually, it’s to find that inner peace. They know that Jesus is the one who is the king of peace.”

Information about various ways that parishes can reach out to its members struggling with mental illness can be found on the website of the National Catholic Partnership on Disability.