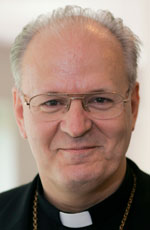 VATICAN CITY (CNS) — Hungarian Cardinal Peter Erdo ministers from the heart of Europe, but with a concern and contacts that span the globe.

The 60-year-old archbishop of Esztergom-Budapest, Cardinal Erdo serves as the president of the Council of European Bishops’ Conferences, coordinating common projects on the continent as well as European church support for Catholic communities in the developing world.

A canon lawyer and historian of church law, he also has carried out specific missions for the Vatican. For instance, in December 2011, he conducted an apostolic visitation of the Pontifical Catholic University of Peru in Lima, which had long been the object of dispute between university and archdiocesan officials over the Catholic identity of the institution and its assets.

Last July, the Vatican ordered the university to stop using the titles “pontifical” and “Catholic.”

At the Synod of Bishops on the new evangelization in October, Cardinal Erdo made headlines when he told his fellow bishops that ignorance about the faith is spreading across Europe, aided by the media.

“Many of the mass media broadcast a presentation of the Christian faith and history that is full of lies, misinforming the public as to the content of our faith as well as to what makes up the reality of the church,” he said.

In a separate speech to the synod, Cardinal Erdo spoke about the potential and hope of a renewed dialogue between faith and science.

Christians today live “at a time of great opportunities to proclaim our faith through dialogue with the natural and historic sciences,” he said.

“The natural sciences — physics, astronomy — show us the elasticity and richness of basic concepts like matter or energy. They prompt questions about the beginning and end of the universe,” he said.

The questions left open by available scientific evidence lead some scientists to accept the possibility of the existence of a transcendent God, Cardinal Erdo said, and it is the task of Catholics to help them get to know that God.

“When we Christians proclaim that God is personal, he loves us, has saved us and calls us to a happy and eternal life with him, we are not formulating conclusions from nature. We have another source, necessary for our faith: divine revelation, which reached its fulfillment in the person of Jesus Christ,” he said.

Addressing the Fifth General Conference of the Bishops from Latin America and the Caribbean in Brazil in 2007, Cardinal Erdo noted the problems that Central and Eastern Europe share with Latin America: secularization, environmental destruction and increasing poverty resulting from free-market economic policies.

Noting that Europe’s population is aging, Cardinal Erdo said that many Europeans look to Latin America, a young region, with hope and respect for its “strong ancestral religious values.”

Blessed John Paul II named him a cardinal in October 2003, and in the 2005 conclave that elected Pope Benedict, Cardinal Erdo, then 52, was the youngest voter.

Born June 25, 1952, in Budapest, Peter Erdo was ordained a priest in 1975 and studied canon law in Budapest and Rome. He became an associate professor at Rome’s Pontifical Gregorian University in 1986. In 1995 and in 1996, he won research grants to study at the University of California, Berkeley. From 1998 to 2003, he served as a rector of Hungary’s Catholic university.

He was consecrated auxiliary bishop of Szekesfehervar in January 2000, before being appointed to Esztergom in December 2002.

At his January 2003 installation, Cardinal-designate Erdo said his priorities would be fostering Christian unity and “helping build true peace in the church and entire nation.”

“I wish to contribute to the strengthening of religious and spiritual life in the face of new challenges and problems that the church in Hungary now faces,” he said.

He has served as president of the Hungarian bishops’ conference since September 2005.

PREVIOUS: Biographer: In past six months, pope was ‘exhausted and disheartened’