Argentines flock to Rio cathedral to see their cardinal-turned-pope 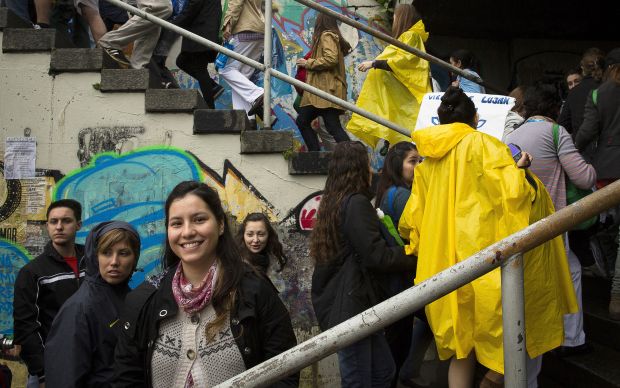 Argentine pilgrim Florencia Aldretes waits with others for Pope Francis to arrive at the Cathedral of San Sebastian in Rio de Janeiro July 25. The pope made a special appearance at the cathedral to talk with World Youth Day pilgrims from his homeland. Aldretes called having an Argentine pope the "best present that we could get here on earth." (CNS photo/Tyler Orsburn)

RIO DE JANEIRO (CNS) — The streets surrounding the Metropolitan Cathedral of San Sebastian were filled with a sea of blue and white flags. The Argentines had come to town.

All without exception said they were there for one reason only. “To see Pope Francis,” yelled Florencia Aldretes of the Archdiocese of Buenos Aires.

Aldretes and 49 of her friends knew that they were so far down the line that chances were almost zero of getting into the cathedral, where the pope had asked to speak to his fellow Argentines July 25.

She called having an Argentine pope the “best present that we could get here on earth.”

Those who got inside for the midday meeting were anxiously awaiting Pope Francis. Local media reported that a line of pilgrims started to form outside the cathedral around midnight.

Sister Lidia Mendia of the Society of Daughters of the Divine Savior was one of the pilgrims outside in the rain. Sister Mendia said she did not mind being outside.

“I just want to see him wave, and then I will rush to Copacabana because there I want to be very close,” she said. Pope Francis was scheduled to meet World Youth Day pilgrims on the beach that night.

Sister Mendia knew the pope when he was still a cardinal.

“I worked with him in Buenos Aires,” she said proudly. “He would often come to our center and talk to our youngsters.”

She said simplicity has always been one of his trademarks.

“Once, after leaving our center,” she said, “the local parish priest offered to take him to the archdiocese in his private car. Cardinal Bergoglio politely thanked him but refused. He then turned to a group of young men who were recovering addicts and asked one of them to accompany him to the bus stop.”

She recalled that some time later, he returned to the community and publicly thanked the young man for his help.

Nearby, an older couple also awaited the pope.

“I’m too old to be a pilgrim, but I’m not too old to come and see the pope,” Ricardo Alvarez of La Plata, Argentina, said with a laugh.

The 60-year-old and his wife, Graciela, 59, said they were not expecting to be invited into the cathedral, but waited patiently under the drizzle just to have the chance to see their local cardinal-turned-pope.

“I think that Latin America is very lucky to have Pope Francis. A European pope does not understand our reality,” he added.

Over the intercom, the pope told the young people to fight against exclusion.

“You and the elderly are condemned to the same destiny: exclusion. Do not let them (society) exclude you,” he said. The crowd outside cheered.

Celina Etienot, 25, stood on her toes and tried to see over the umbrellas. The member of Cayetano Belgrano Parish in Buenos Aires had been up front, but when the rain increased, she had to find shelter to protect 5-month-old Benjamin.

“I’m here in Rio with my husband but, unfortunately, he is working at the Vocational Fair and is arriving later, so I came with my son,” she said.

Etienot said Pope Francis was one of the best things that happened to her country.

“There has been an increase in the number of Catholics once again attending Sunday Mass,” she said. “Argentine Catholics of all ages are coming back to church after the election of Pope Francis.”

Etienot also highlighted his simplicity and his humility. She said she still remembered how, after Corpus Christi celebrations, the cardinal would visit many parishes in the archdiocese to thank the volunteers.

“I even had hot chocolate with him once,” she said shyly.

When the rain picked up and it became more difficult to hear, pilgrims stood silently, straining to try to capture the pope’s words.

Among them was Alberto Barrientos, 25, of the Archdiocese of Acapulco, Mexico. When asked if he knew that the meeting was only for Argentines, he shrugged and said, “The pope is everybody’s pope, Argentina’s … Mexico’s … everyone’s.”