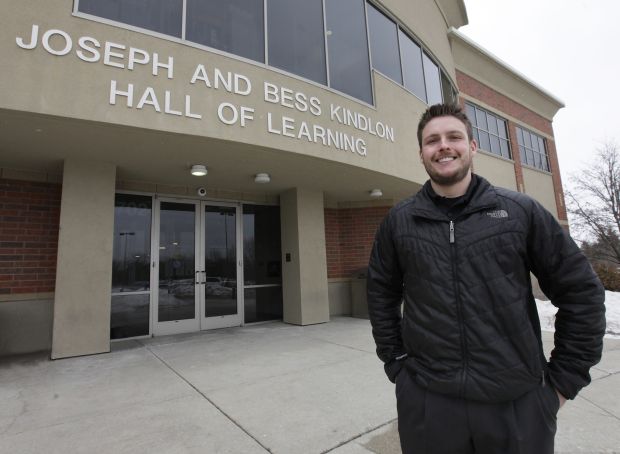 Ian Markert, 26, a student at Benedictine University in Lisle, Ill., who is majoring in international business and economics, poses for a photo outside the university Jan. 19. Markert is a Marine veteran who is active in the university's veterans student group. (CNS photo/Karen Callaway, Catholic New World)

LEVITTOWN, Pa. (CNS) — Catholic colleges and universities across the United States are attracting military veterans of recent wars with a combination of financial aid, individualized assistance and opportunities for peer support.

Many Catholic institutions participate in the U.S. Department of Veterans Affairs’ Yellow Ribbon program, which helps close the gap between the tuition provided under the Post-9/11 GI Bill — usually the equivalent of in-state tuition at a state college or university — and the cost of a private institution.

The college provides a specified number of students with a partial grant that is matched by the VA and, when those funds are combined with housing allowances and book stipends provided under the GI Bill, a fully eligible student finds most of his or her costs covered.

The Post-9/11 GI Bill, signed into law in 2008, expands on the World War II-era GI Bill of Rights, providing education benefits for members of the military who have served on active duty for 90 or more days since Sept. 10, 2001. National Guard and Reserve members are also eligible to receive the same benefits.

Other forms of aid different in various ways from the GI Bill are available to some veterans, active-duty military personnel and to dependents. However, a higher percentage of veteran-students than other students are married and may have children, and so the students and their spouses have to provide for family support even though the cost of college may be covered.

Although some institutions, particularly smaller ones, may have a small number of veterans enrolled, their services to these students have put them on listings of best colleges for veterans such as that published by U.S. News & World Report or designated “veteran-friendly” by publications and organizations.

Catholic colleges have seen their enrollment of veterans grow. At Canisius College, for example, a 4,500-student Jesuit school in Buffalo, N.Y., it has increased by some 300 percent since 2007, while at the three-times-larger Jesuit-run Fordham University in New York City, veterans’ enrollment has grown tenfold in recent years.

At the Benedictine-run St. Leo University, which has its main campus near Tampa, Fla., and 33 educational centers in seven states including many on or near military bases as well as an online program, nearly 39 percent of about 16,000 students are either active-duty military or military veterans.

At St. Leo, Jose Coll devotes half his time to his work as a professor of social work and half to working with current military and veterans on campus. He said St. Leo offers “an enormous amount of outreach” both to prospective and current students as well as to faculty and staff. 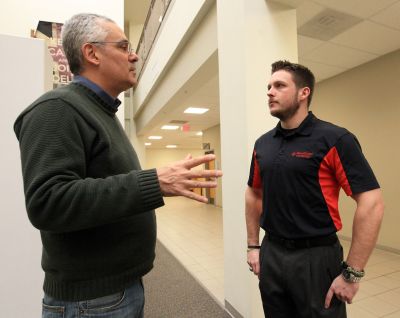 He conducts webinars for educators that are also available to those at other institutions on the particular needs for services of veterans who are students. Aside from the problems some face with post-traumatic stress and traumatic brain injury, “they’re all adults, and they have military experience, but they still have to figure out what they want to be when they grow up,” Coll told Catholic News Service in a telephone interview.

He regularly blogs about issues facing veterans in college, and is working with another faculty member on a book about the subject.

Advisers at several schools spoke to CNS of the difficulties veterans as students face in making the transition from the very structured environment of the military to the world of academia where they are free to make their own good or bad decisions.

Andrew Overfield, a retired Army officer, is associate director of admissions with responsibilities for coordinating services to veterans at Canisius, where a student lounge for veterans is located right outside of his office.

“A lot of times what I do is listen,” he said, making himself available to help these students with various issues and problems. “Helping them with time management is critical,” he said, and the college tutoring center provides additional assistance with that.

Harry Damerow is unlike most veterans in school; he’s not in his mid-20s but is 47 and retired after a total of 24 years in the Marine Corps and the Army.

After his graduation in December from Seton Hill College near Greensburg, Pa., about 30 miles east of Pittsburgh, he planned to continue there with studies for teacher certification.

He tells his younger counterparts they have to think of college as their job. “It’s your responsibility to be there. Hard-working Americans are paying taxes for me to go to school and deserve my best effort,” said Damerow, who managed a 3.81 GPA.

Ian Markert, 26, lives in Lisle, Ill., near Chicago, where Benedictine University is located.

A Marine veteran majoring in international business and economics, Markert is active in the veterans’ student group at Benedictine. He said he was attracted by the school’s relatively small size, of about 3,000 students, and the small class size, which permits one-to-one interaction with faculty and staff. He agreed that one of the most difficult transitions from military to academic life was having to make one’s own decisions and adapting to the culture of a particular school.

Having the support of other veterans is a real help, he said. “The traditional student population doesn’t understand why you do what you do.”

At the University of the Incarnate Word in Alamo Heights, Texas, near San Antonio, Karen Wyatt is director of the center for veterans’ affairs. The center provides walk-in service for veterans with questions or issues that need to be resolved, and also serves veterans’ families.

Wyatt said traditional students at Incarnate Word learn much from the veterans enrolled there, with their greater life and management experience, and the other students also are very welcoming to the veterans.

Trevor Hehn, a third-year law student at The Catholic University of America in Washington and a veteran of Army service in Iraq, chose the school because it was both national and Catholic, saying: “The name is what grabbed me.” He’s a lifelong, practicing Catholic and “faith was a big part of my life.”

He did his undergraduate degree in philosophy and enjoyed theology courses and feels they helped to “set me up for success for the rest of my life.”

He has been involved in setting up the Cardinal Veterans Organization — college teams and organizations at Catholic University are nicknamed the Cardinals. Although the vets’ group is not formally in place yet — he said that as a law student he wants to be doubly assured that its governing structure is properly drawn up — he has been pleased with the response.

Like many such groups, its membership will not be limited to veterans but will include those who wish to support veterans, and Hehn hopes it will help integrate veterans who are students into campus life as well as make them more aware of all the services available to them at the university.