Top 10 most interesting popes who have been declared saints 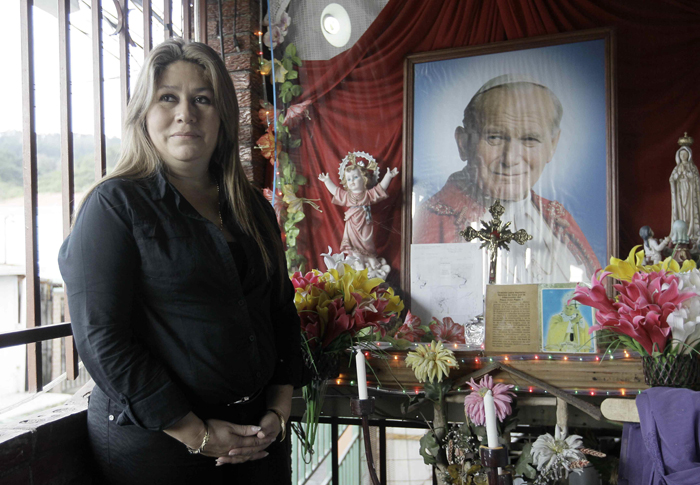 Floribeth Mora Diaz listens to the questions from reporters in front of a shrine to Blessed John Paul II at her home in Dulce Nombre de Tres Rios, Costa Rica, in this July 5, 2013, file photo. Mora said she said she was cured through the intercession of Blessed John Paul II after suffering an aneurysm in April 2011. Her cure was the second miracle in the sainthood cause of the late pontiff, who will be canonized April 27 at the Vatican. (CNS photo/Jeffrey Arguedas, EPA) 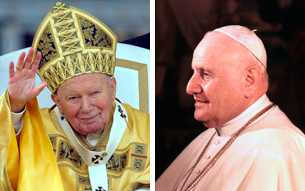 VATICAN CITY (CNS) — From St. Peter to Pope Francis, there have been 266 popes; 78 of them are recognized as saints, and that number will jump to 80 after the April 27 canonizations of Blesseds John XXIII and John Paul II.

The earliest popes were martyred for their faith, which the Catholic Church takes as a clear sign of holiness. After the early period of persecution of the church ended, the clusters of pope’s names with the title “saint” before them got thinner.

Over the past 701 years, and as of April 27, only four popes will have been declared saints.

Here’s a quick look at some of the top 10 most interesting of the earliest popes who are saints:

1. St. Peter, who was first named Simon, was the first to refer to Jesus as Christ, the Son of the living God. His special stature in the Gospels to “feed the sheep” of Christ helped form his mission to proclaim, protect and nourish the faith. He is also considered the first pope. Early tradition says he was crucified at the foot of Vatican Hill in the mid-60s during the reign of Emperor Nero, martyred because of his Christian faith and preaching. His tomb is believed to have been found under St. Peter’s Basilica.

2. St. Soter was Bishop of Rome from around 167 A.D. to his death about seven years later. It’s believed St. Soter formally introduced the annual celebration of Easter in Rome.

3. St. Fabian was pope 236-250. He is famous for the miraculous nature of his election, in which a dove is said to have descended on his head to mark him as the Holy Spirit’s unexpected choice to become the next pope.

4. St. Damasus was born in Rome and served as pope 366-384. His papacy coincided with the establishment of Christianity as the official religion of the Roman Empire in 380, and he was a staunch advocate of the primacy of the bishop of Rome as being the direct successor of Peter. He is said to have established Latin as the standard liturgical language in Rome.

5. St. Leo the Great was born with the name Leo, which he kept as pope. Serving as pope 440-461, he was the first pope to be called “the great” and is a doctor of the church. He confirmed the church’s position on the incarnation of Christ — that Christ was both divine and human. He is best known for having met Attila the Hun in 452 and persuading him to turn back from his invasion of Italy.

6. St. Gregory the Great was pope 590-604 and was the second pope to be referred to as “the Great,” after Leo. He was related to two popes, and his mother and two aunts were also canonized, leading him to be considered “a saint among saints.” He had been a monk and did not want to serve as pope upon his election. He often lamented his new duties as pontiff as having to “bear with secular business” and no longer being part of the peaceful and contemplative life of the monastery. Nonetheless, he put great emphasis on simplicity and charity and donated food to Rome’s poor as well as invited poor people to eat with him each day.

7. St. Nicholas I the Great was pope 858-867. He was the third and last pope to receive the title of “great.” He worked to strengthen papal authority and denied anyone had the right to depose a bishop without papal authority. He staunchly upheld marriage laws and urged bishops of their duty to excommunicate a royal Catholic who left her spouse for another. He did support freedom to marry and did not endorse some bishops when they excommunicated another royal for marrying without her father’s consent.

8. St. Gregory VII was pope 1073-1085. He enacted many reforms such as reversing centuries of civil control over church affairs and giving the pope of Rome full sovereignty over all church affairs in the West. He promoted a more saintly episcopacy and priesthood and fought against simony, the buying and selling of church office. He introduced the legislation that locked in the observance of celibacy, despite frequent debates over the issue. He decreed the Roman rite for all of Europe and established Nov. 1 as All Saints’ Day. He lifted the excommunication of Emperor Henry IV in 1077 after the emperor did public penance of walking barefoot in the snow.

9. St. Celestine V was a Benedictine monk and hermit who resigned from the papacy just a few months after his election in 1294 because he wanted to return to his humble monastic life. He issued a papal bull articulating the ability of a pope to resign and establishing rules for an abdication. Pope Benedict XVI, the next pope in history who would voluntarily resign in 2013, placed the pallium he received when he was elected in 2005 on the saint’s tomb in L’Aquila, Italy, in 2009 and left it there as a gift.

10. St. Pius X was elected pope in 1903 and served until his death in 1914. He promoted greater piety among the faithful, encouraged the frequent reception of the sacraments of penance and the Eucharist, and insisted on proper decorum during the celebration of the Mass. He highlighted the beauty and appropriateness of Gregorian chant, cautioned against using popular musical styles and encouraged efforts to ensure that the faithful could participate actively in the Mass by singing. He reorganized the Roman Curia and established a congregation of cardinals to codify Canon Law. He embraced scientific inquiry and designed sundials. However, when given the first papal car in 1909 by then-Archbishop John M. Farley of New York, the pope never used it, sticking with his horse and landau carriage.

NEXT: Vatican sends bishop to Scotland to investigate Edinburgh Archdiocese