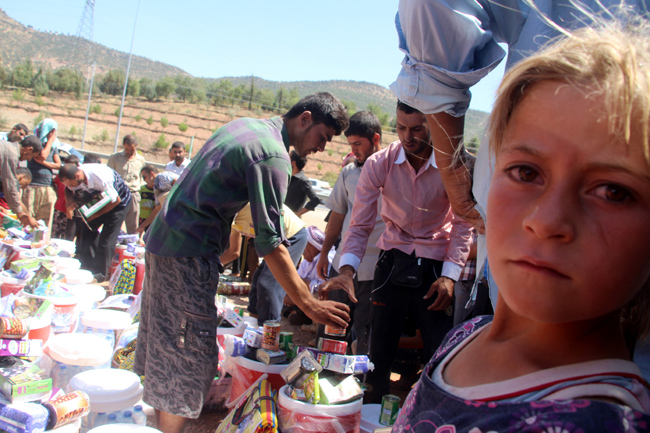 Members of the Yezidi religious minority who fled from violence in Mosul, Iraq, receive humanitarian aid Aug. 21 in Dohuk province, in the northern part of the country. Catholic relief agencies are trying raise more money for additional aid in the region. (CNS photo/EPA) 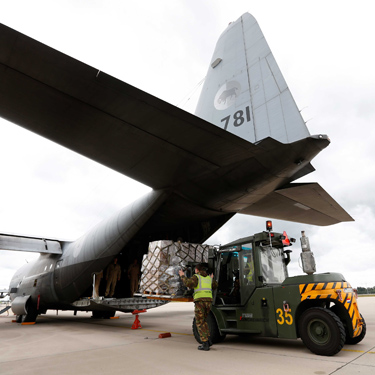 A Dutch Royal Air Force transport aircraft at Eindhoven Airbase in Eindhoven, Netherlands, is being loaded Aug. 18 with relief supplies for victims of the humanitarian disaster in Iraq. (CNS photo/Bas Czerwinski, EPA)

RYE, N.Y. (CNS) — Catholic organizations in the United States have launched public appeals to fund assistance to Christians and other religious minorities displaced in Iraq and Syria.

The Catholic Near East Welfare Association, Jesuit Relief Service, Knights of Columbus, Catholic Relief Services and Aid to the Church in Need are among Catholic agencies seeking funds.

Aid to the Church in Need, an international Catholic charity under the guidance of the Holy See, has pledged an initial $1 million, of which $458,000 has already been given. Edward Clancy, ACN’s director of outreach, said funds are being directed to local bishops in Syria and Iraq.

Clancy said Aid to the Church in Need has funded pastoral assistance to the church communities in Syria and Iraq “for decades,” including Mass stipends and vocation support. Because of the urgency of the current situation, it is now giving money for food and tents for the displaced.

He said he was confident individual donors would meet and exceed the $1 million already pledged. The charity is accepting donations at the Aid to the Church in Need website.

Catholic Near East Welfare Association, a charitable organization mandated by the Holy See to work for, through and with the Eastern Catholic churches, launched an appeal July 28 for aid to Iraq. It released an initial grant of $75,000 to purchase infant formula, diaper and handicapped-accessible toilets and showers for camps for displaced Iraqis.

“They have put together an emergency response team and we are working with them,” said LaCivita, noting that the agency has been active in Iraq for more than 50 years.

In Syria, CNEWA supported pastoral programs and long-term human development until the current civil war. LaCivita said CNEWA is working in partnership with religious orders of men and women to provide emergency aid to internally displaced Syrians and those who fled to Jordan and Lebanon.

He said the agency hopes to raise $500,000 for the Iraq and Syria effort from Catholics in the United States. The agency is accepting donations at its website.

Jesuit Refugee Service teams in Syria won the 2014 Pax Christi International Peace Award for their work. The agency helps more than 300,000 people in Damascus, Homs and Aleppo with educational and psychosocial activities; food and rent; and basic health care.

The agency has issued an urgent appeal for its work in Syria and is seeking donations at its website.

The Knights of Columbus Catholic fraternal organization committed $1 million Aug. 12 for humanitarian aid in Iraq. This includes an initial $500,000 and a pledge to match $500,000 in donations from the public.

Andrew Walther, vice president for media, research and development for the Knights of Columbus, said the group works with local Catholic church entities, “and with Vatican and other major charities operating on the ground in the region to which we are sending aid.” He said the organization also has provided charitable outreach in Iraq through individual Knights who served in the U. S. military there.

Walther said the Knights’ appeal to members and individuals has raised almost $2 million. The organization is accepting donations at its website.

Liz O’Neill, CRS communications officer, said the agency has six staff in Iraq and works in partnership with Caritas Iraq, diocesan bishops and priests. Efforts are concentrated in northern Iraq.

She said CRS has collaborated with local partners in Iraq since 1992 and withdrew its foreign personnel in 2004 because of the deteriorating security situation. CRS helps displaced Iraqis and Syrian refugees in Iraq.

O’Neill also said the agency would need $4 million to fulfill humanitarian needs in Iraq over the next several months. CRS is accepting donations at its website.

On Aug. 19, Archbishop Joseph E. Kurtz of Louisville, Kentucky, president of the U.S. Conference of Catholic Bishops, asked bishops throughout the country to hold a special collection in September to support the humanitarian and pastoral needs of Christians and other victims of violence in the Middle East, including Iraq, Syria and Gaza. Funds will be sent to the USCCB Office of National Collections for use by Catholic Relief Services and other Catholic agencies working in partnership with the local church.

Archbishop Kurtz said the collection would be used to support church programs, to aid persecuted Christians and “to respond to rebuilding needs of Catholic dioceses in the impacted areas.”

NEXT: Immigrants, activists urge Obama to act on immigration reform