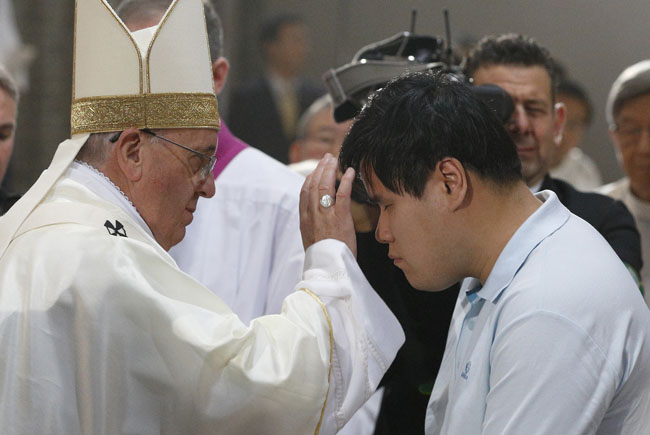 Pope Francis celebrates a Mass for peace and for the reconciliation of North and South Korea at Myongdong Cathedral in Seoul, South Korea, Aug. 18. (CNS photo/Paul Haring) 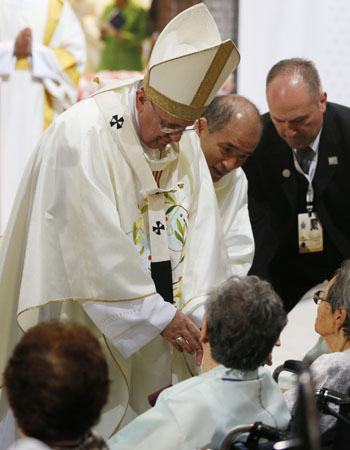 Pope Francis greets people in wheelchairs as he arrives to celebrate a Mass for peace and for the reconciliation of North and South Korea at Myongdong Cathedral in Seoul, South Korea, Aug. 18. (CNS photo/Paul Haring)

SEOUL, South Korea (CNS) — Pope Francis told Korean Catholics that the reunification of their divided peninsula as well as the harmony of South Korean society depend on the practice of Gospel virtues, especially charity and forgiveness.

God’s promise to restore unity and prosperity to “a people dispersed by disaster and division … is inseparably tied to a command: the command to return to God and wholeheartedly obey his law,” Pope Francis said.

In a homily Aug. 18, during a Mass for peace and reconciliation at Seoul’s Myongdong Cathedral, Pope Francis said Jesus asked people “to believe that forgiveness is the door which leads to reconciliation.”

“I ask you to bear convincing witness to Christ’s message of forgiveness in your homes, in your communities and at every level of national life,” he said.

“Thus our prayers for peace and reconciliation will rise to God from ever more pure hearts and, by his gracious gift, obtain that precious good for which we all long,” he said.

The Mass was closed to the public. Guests included South Korean President Park Geun-hye, women who were sold into sexual slavery during World War II, North Korean defectors, those whose families were kidnapped and taken to North Korea and 12 clerics from various faiths.

Before the Mass, the pope met with seven “comfort women,” who were forced into prostitution by the Japanese before and during World War II. One woman gave the pope a butterfly pin symbolizing their call for justice, and the pope wore the pin during the Mass.

Outside the clergy changing room, near a portrait of Mary, was a crown of thorns made of barbed wire from the demilitarized zone between the two Koreas.

“My visit now culminates in this celebration of Mass, in which we implore from God the grace of peace and reconciliation,” Pope Francis said from an altar decorated with rows of pink and white roses. “This prayer has a particular resonance on the Korean peninsula. Today’s Mass is first and foremost a prayer for reconciliation in this Korean family.”

The pope suggested the need for reconciliation lay not only between South Korea and the communist North, which have been divided since the end of the Korean War in 1953, but within South Korea itself, the world’s 13th-largest economy, where prosperity has brought increasing inequality.

“God’s urgent summons to conversion also challenges Christ’s followers in Korea to examine the quality of their own contribution to the building of a truly just and humane society,” he said.

The pope urged Korean Catholics to “show evangelical concern for the less fortunate, the marginalized, those without work and those who do not share in the prosperity of the many” and to “firmly reject a mindset shaped by suspicion, confrontation and competition.”

“Let us pray, then, for the emergence of new opportunities for dialogue, encounter and the resolution of differences, for continued generosity in providing humanitarian assistance to those in need, and for ever greater recognition that all Koreans are brothers and sisters, members of one family, one people,” he said.

Before the Mass, Pope Francis met with Buddhist, Orthodox, Lutheran and other Protestant leaders. He asked them to pray for him, and said: “I believe that we have to walk together with other brothers and sisters in the presence of God. And so I am sincerely grateful for all of the leaders of various religions. It is a path that we walk together.”

Bishop Peter Kang U-il of Jeju, president of the Catholic Bishops’ Conference of Korea, said the bishops held a small farewell party for the pope before he left for the airport to return to Rome. He said the last thing Pope Francis said to the bishops was “Please pray for me.”

Seoul Auxiliary Bishop Basil Cho Kyu-man said when he watched Pope Francis, he thought, “Oh this is how Jesus Christ approached the poor in the past.” He said he believed the pope had planted a seed of faith. that the bishops need to nourish.

NEXT: ‘We need actions, not words’ to stop militants, says Chaldean leader