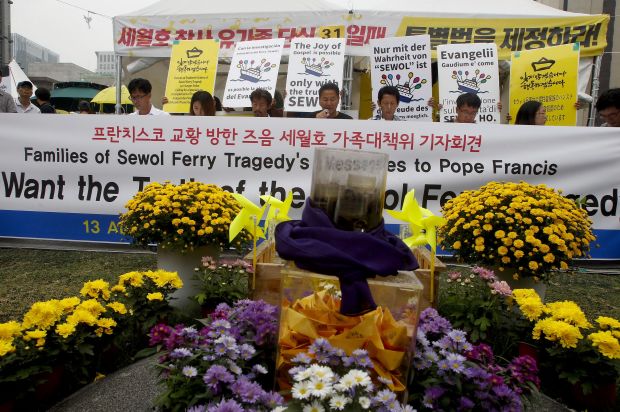 SEOUL, South Korea (CNS) — Families of the victims of the April Sewol ferry accident appealed directly to Pope Francis for justice on the eve of his Aug. 14-18 visit.

Under overcast skies and spitting rain at the plaza outside of Seoul City Hall, a handful of families asked the pontiff to help them get answers for why their children “had to die” the way they did. They have been pushing for a special law that would allow for an independent, transparent investigation into the accident and the pressing criminal charges against those they believe responsible for the accident off the country’s southwestern coast that left 304 people dead, mostly high school students.

Park Bona, 20, read her mother Jung Hye-sook’s message before dozens of reporters, saying her family of “devout Catholics” had been looking forward to seeing the pope well before the April 16 accident.

“However, our hopes and anticipation were crushed by tragedy. I lost one of my two children, my 18-year old son. … Park Seong-ho Emmanuel was a good child who wished to be a priest like you,” Jung wrote.

She said the government has “no political will to seek the truth.” The proposal got stalled in parliament after members of opposing parties could not agree on certain provisions.

Father Jang Dong Hun of the Incheon Diocese told Catholic News Service it was important for the church to support the families. For the past two weeks he has led dozens of diocesan and religious order priests and nuns who have joined the hunger strike at various intervals since it started in mid-July. Apart from taking only water from morning until the end of the day, group members also recite the rosary every hour.

He said through an interpreter, “As a religious person or a religious group, praying and also (being) with them at their lowest (point) and also staying with them, spending time with them may seem trivial … but that’s the best way, and also the most effective way to raise awareness of this issue.”

The Catholic religious were joined by dozens of others, including social justice advocates and other faith groups. They were camped in an area that sits at the center of the grounds that will host the beatification of 124 Korean martyrs Aug.16.

A spokeswoman for the families said the group and the preparatory committee, led by Bishop Peter Kang U-il of Jeju, president of the Catholic Bishops’ Conference of Korea, are in talks about how the group could remain there during the beatification Mass.

Kim Byung-kwon, chair of the Families of the Sewol Ferry Tragedy, said members of their organization would greet Pope Francis upon his arrival, attend the beatification of the 124 martyrs who were the original founders of the Catholic Church in Korea, attend the closing Mass for Asian Youth Day in Daejeon about 75 miles south of Seoul as well as meet in person with him in Daejeon on another occasion.

“We want to talk to Pope Francis (about) why the truth of the Sewol ferry has not been found even after 120 days,” Kim said through an interpreter. “We also … urge the pope and also the Catholic communities around the world and also the global citizens to support us and stand in solidarity.”

Kim Young-oh, who began a hunger strike 100 days after the accident, said: “I heard that Pope Francis cares for the people who hurt the most and values peace and human rights. Please remember us.”

The ferry, loaded over capacity, overturned on its way to the southern island province of Jeju. Media reports highlighted several instances of bungling by the people in charge, including an order for some young people to stay put in groups while some crew members rushed to save themselves.