Latest papal push for peace spans a century, at least 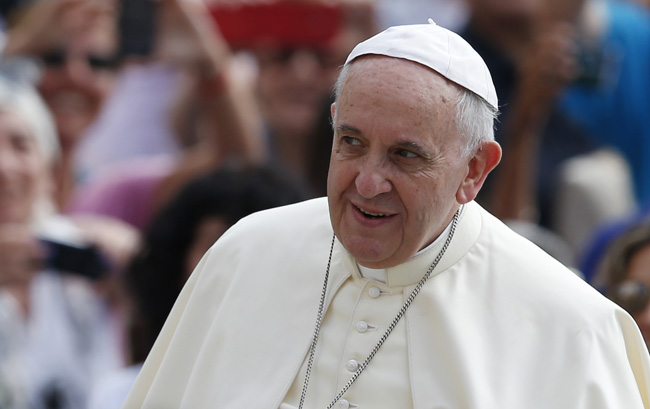 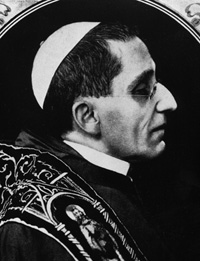 Pope Benedict XV, who served as pope from 1914-1922, is pictured in this image from L’Osservatore Romano’s Fondo Giordani collection. He was elected pope less than six weeks after the outbreak of World War I — and almost immediately started campaigning against it. (CNS photo/L’Osservatore Romano)

VATICAN CITY (CNS) — Among the various World War I-related anniversaries of this centennial year, the election of Pope Benedict XV, 100 years ago Sept. 3, is apt to be one of the less widely observed.

Pope Benedict XV is the most obscure of the nine men who have led the Catholic Church over the last century — the title of his biography by historian John F. Pollard is “The Unknown Pope” — and in some ways, this negative distinction seems justified. His seven-and-a-half-year pontificate was relatively short and, with respect to his most prominent undertaking, spectacularly unsuccessful.

Yet Pope Benedict left a legacy of lasting significance for the papacy and the church as a whole in the vital area of teaching and practice on war and peace.

Cardinal Giacomo della Chiesa of Bologna, Italy, was elected pope less than six weeks after the outbreak of the world war — and almost immediately started campaigning against it. His efforts reached their peak in his Peace Note of 1917, which urged all belligerents to stop fighting in favor of international arbitration of their disputes.

All of these efforts were for naught, largely because of the weakness of Vatican diplomacy, which had languished since the Holy See lost the Papal States half a century earlier.

U.S. President Woodrow Wilson, who took his nation into the war in 1917, was dismissive of Pope Benedict’s attempts to intervene. Even many Catholic bishops on both sides put patriotism ahead of loyalty to the pope and openly undercut his calls for peace.

After the war ended in November 1918, the victors kept the Vatican out of the peace conference in Paris. Pope Benedict presciently objected to the punitive treatment of Germany, which Adolf Hitler later exploited in his rise to power.

The pope was more successful in his efforts to organize prisoner exchanges and humanitarian relief for refugees and other noncombatants during the war.

He also left behind an enhanced Vatican diplomatic establishment.

“By the time Benedict died in 1922, the Vatican had relations with nearly all of the great powers, including Germany, except America and except the USSR,” Pollard said.

Today, the Holy See has full diplomatic relations with 180 countries.

Pope Benedict’s most significant contribution, however, was the new way he approached the age-old problem of war.

In condemning the world war as a whole without taking sides, the pope did not reason in terms of traditional church teaching about just and unjust wars. With Catholic nations on both sides of the conflict and the Vatican no longer a territorial power with a strategic stake in the outcome, the pope was free to reject the horror of war per se.

He was able to see that modern technology — especially the novelty of aerial bombardment — had made traditional moral calculations and distinctions between combatants and noncombatants increasingly meaningless.

Pope Benedict’s influence on his successors is clear in Pope Pius XII’s attempts to use diplomacy to forestall World War II; in St. John XXIII’s call for a ban on nuclear weapons; in Pope Paul VI’s cry of “no more war, war never again” in a speech at the United Nations; and in St. John Paul II’s interreligious prayers for peace at Assisi.

After Cardinal Joseph Ratzinger was elected pope in 2005, he said he chose the name Benedict in honor of his wartime predecessor, “that courageous prophet of peace, who guided the church through turbulent times of war. In his footsteps, I place my ministry in the service of reconciliation and harmony between peoples.”

In mid-August, Pope Francis affirmed traditional Catholic teaching that the use of force can be justified in order to stop “unjust aggressors” such as Islamic State terrorists in Iraq. But he also noted that decisions about such interventions should be made in the United Nations.

Pope Francis — whose efforts to end or prevent war have included a vigil for peace in Syria that drew 100,000 people to St. Peter’s Square and a joint prayer for peace with the Israeli and Palestinian presidents in the Vatican Gardens — told an international gathering of diplomats earlier this year that it was Pope Benedict XV who had shown world leaders the “royal road” of “diplomacy of dialogue.”

That legacy is one example of how, even in the practicalities of international politics, the papacy measures its influence and success not in years but in centuries.

PREVIOUS: Just-war theory reemerges in light of Islamic State and past Iraqi wars

NEXT: Scottish archbishops urge Catholics to vote in independence referendum