From a far off land, they’re coming to Overbrook 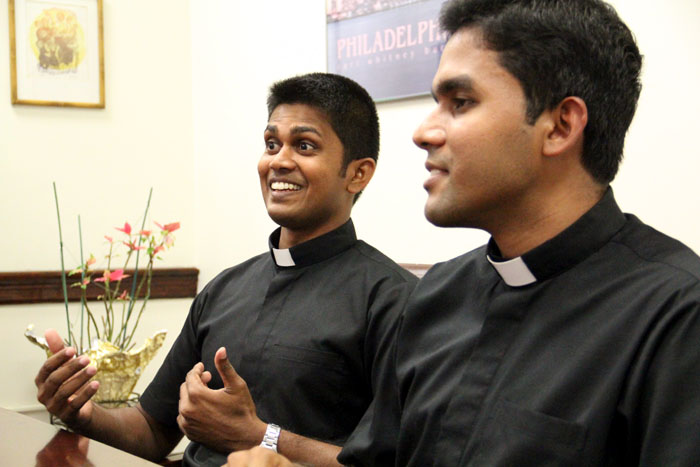 Sheron Fernando (left) and Shalindra Kotikawadde describe their experience of the United States, the change of seasons and life at St. Charles Borromeo Seminary, where they are completing their priestly formation and studies in theology. (Sarah Webb) 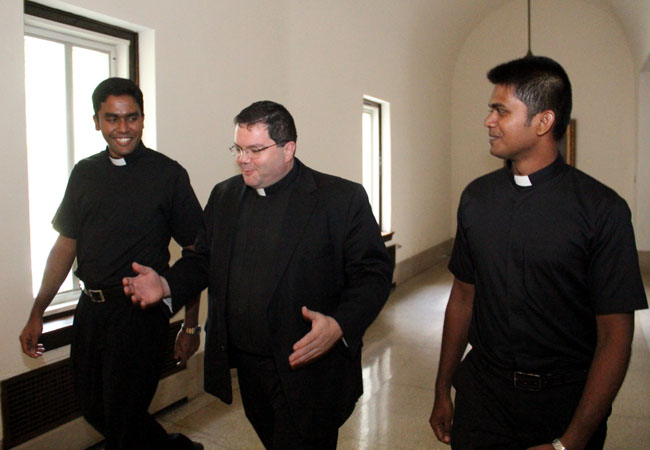 You could say Sheron Fernando, 23, and Shalindra Kotikawadde, 26, have come a long way to attend graduate school — more than 8,800 miles from Colombo, Sri Lanka, the island nation formerly known as Ceylon which is about 50 miles off the southern tip of India.

But they are very special students: seminarians who completed their B.A. in philosophy in their home seminary in Colombo and have come to St. Charles Borromeo Seminary for their theology degree and to complete their priestly formation.

At St. Charles for just three weeks now, “We are happy to be here; it is a privilege to be at a seminary with such a long tradition,” said Sheron, who has never previously visited the U.S. “We are accepted by the priests and all of the brothers here.”

Shalindra on the other hand visited America previously during a three-week vacation with his parents.

“We stayed in New York and Washington,” he said. “I didn’t like New York because it was too noisy; Philadelphia is silent and quiet.”

Most Sri Lankans are Buddhist, but there are a million or so Catholics and their faith traces back to Portuguese Catholics who arrived there in 1505, long before Philadelphia was settled. Even though the Portuguese were supplanted first by the Dutch and then the English before 20th century independence as a republic, Catholicism remained strong among the descendents of the early converts.

The families of Sheron and Shalindra have been Catholic for many, many generations.

As for his vocation, it is through “my love for Jesus,” said Sheron, who will be the first priest in his extended family. “This is the way I am called to live my life. My parents are happy to have a son who wants to be a priest. In Sri Lanka it is considered an honor.”

Shalindra decided when he was very young that he wanted to be a priest and associates that with a cousin who is a priest. “That’s how the seed of vocation started for me,” he said. But there were four members of his father’s family who also entered the seminary but did not stay.

“I’m the only survivor,” he said. “I don’t know why God called me, it is a mystery. I think it is because I love Jesus.”

Sheron and Shalindra do have one advantage as they begin their studies at St. Charles: They are both fluent in English. All of the classes at their seminary in Colombo were taught in English because it is a link language for people who have different first languages. Their seminary was associated with the Pontifical Urbiana University in Rome where their papers would be sent for grading. 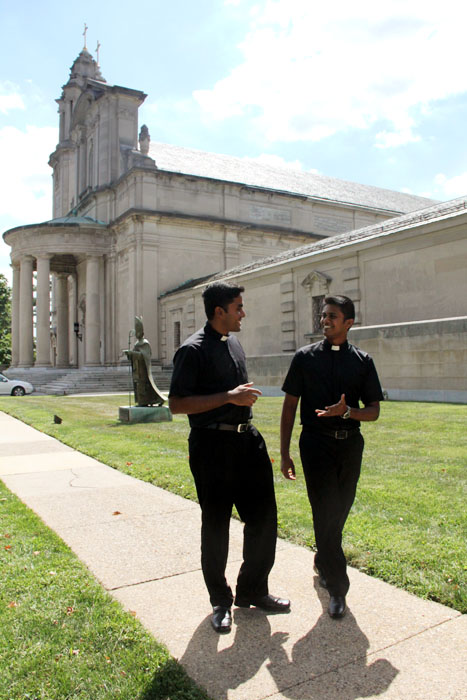 There are also Sri Lankan seminarians studying in Rome and four are studying at Mount St. Mary Seminary in Maryland, sponsored by the Diocese of Lincoln in Nebraska, they explained.

One difference Sheron and Shalindra have noticed at St. Charles is there are far fewer courses studied over a semester, but perhaps partially accounted for that is the difference between graduate and undergraduate studies.

“In this past three weeks it has been a good experience; the classes are active here with good professors and there is more interplay between the professors and students. It’s a good study environment,” Sheron said.

Both noted how well equipped the seminary is. For example the students have individual computers while in Colombo they would have to go to a computer room.

Spiritually, the atmosphere is very much the same as they experienced in Sri Lanka. They noted the good spiritual direction and attention to the liturgy, something their archbishop, Cardinal Malcolm Ranjith, would appreciate because he is a former secretary of the Congregation for Divine Worship and Discipline of the Sacraments at the Vatican.

Sheron and Shalindra probably won’t be able to return home for a visit before their diaconate and possibly ordination, but in the meantime, thanks to modern technology they can Skype their families at home and they will probably be in contact with other Sri Lankans in the area and surrounding states.

Everything is different and new for them, especially foods and the climate. Philadelphia has four seasons — summer, winter, spring and fall. Sri Lanka has virtually unvarying summer, so the two have never seen snow nor experienced cold.

Curiously while Sri Lanka is always warm, it rarely gets past the high 80s because it is on an island and the surrounding water is always just about 80 degrees. Their seasons are the rainy season and the dry season.

Their very first contact with Americans may have been less than cordial through immigration agents, given the tensions of the times, and they were two deeply tanned young men traveling to America from a country that has experienced some political unrest. That has not been the experience at St. Charles.

“We are feeling very comfortable with warm and welcoming people around us, asking us if there is anything we need,” Sheron said. “It’s not like the American we saw in the visa department and Homeland Security.”

Among those reaching out to them is Msgr. Michael Magee, who chairs the Systematic Theology Department at the seminary and who worked with Cardinal Ranjith at the Congregation for Divine Worship when he was in Rome.

“I look on this as beneficial to the other seminarians,” Msgr. Magee said. “We often have seminarians from other countries who are here to become Americans and assimilate into our culture. Everyone knows Sheron and Shalindra are going back to Sri Lanka.”

The other seminarians will have “a chance to experience a cultural background very different from their own and see the goodness in that culture,” he said.

NEXT: Sisters celebrate religious lives of adventure in service