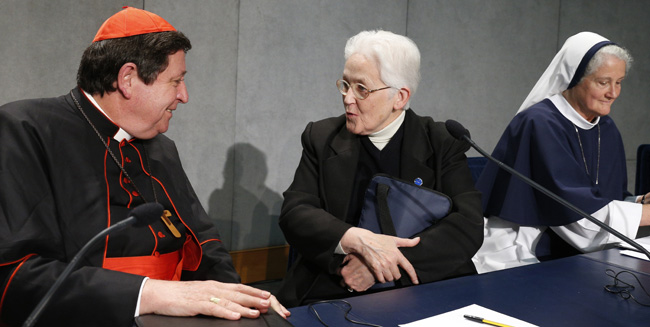 Brazilian Cardinal Joao Braz de Aviz, prefect of the Congregation for Institutes of Consecrated Life and Societies of Apostolic Life, speaks with Sister Sharon Holland, president of the Leadership Conference of Women Religious, at the conclusion of a Dec. 16 Vatican press conference for release of the final report of a Vatican-ordered investigation of U.S. communities of women religious. Also pictured is Sister Agnes Mary Donovan, coordinator of the Council of Major Superiors of Women Religious. (CNS photo/Paul Haring)

VATICAN CITY (CNS) — A massive, detailed Vatican-ordered investigation of U.S. communities of women religious ended with a call to the women themselves to continue discerning how best to live the Gospel in fidelity to their orders’ founding ideals while facing steeply declining numbers and a rapidly aging membership.

Although initially seen by many religious and lay Catholics as a punitive measure, the apostolic visitation concluded with the publication Dec. 16 of a 5,000-word final report summarizing the problems and challenges the women themselves see in their communities and thanking them for their service to the church and to society, especially the poor.

The visitation process, carried out between 2009 and 2012 with detailed questionnaires and on-site visits, mainly by other women religious, “sought to convey the caring support of the church in respectful, sister-to-sister dialogue,” says the final report by the Congregation for Institutes of Consecrated Life and Societies of Apostolic Life.

The process attempted to help the Vatican “and the sisters themselves to be more cognizant of their current situation and challenges in order to formulate realistic, effective plans for the future,” said the report, signed by Cardinal Joao Braz de Aviz, prefect of the congregation for religious, and Archbishop Jose Rodriguez Carballo, secretary.

In summarizing the results, the congregation called for special attention in several areas, including: formation programs for new members; the personal, liturgical and common prayer life of members; ensuring their spiritual practices and ministries are fully in harmony with church teaching “about God, creation, the Incarnation and redemption” in Christ; strengthening community life, especially for members living on their own or with just one other sister; living their vow of poverty while wisely administering financial resources; and strengthening communion within the church, especially with the bishops and Vatican officials.

The Vatican, the report says, “is well aware that the apostolic visitation was met with apprehension and suspicion by some women religious. This resulted in a refusal, on the part of some institutes, to collaborate fully in the process.”

“While the lack of full cooperation was a painful disappointment for us,” the congregation writes, “we use this present opportunity to invite all religious institutes to accept our willingness to engage in respectful and fruitful dialogue with them.”

“A number of sisters conveyed to the apostolic visitator a desire for greater recognition and support of the contribution of women religious to the church on the part of its pastors,” the report says. “They noted the ongoing need for honest dialogue with bishops and clergy as a means of clarifying their role in the church and strengthening their witness and effectiveness as women faithful to the church’s teaching and mission.”

In addition, it says, “some spoke of their perception of not having enough input into pastoral decisions which affect them or about which they have considerable experience and expertise.”

The current Year of Consecrated Life, the congregation says, should be “a graced opportunity for all of us within the church — religious, clergy and laity — to take those steps toward forgiveness and reconciliation, which will offer a radiant and attractive witness of fraternal communion to all.”

The former prefect of the congregation, Cardinal Franc Rode, ordered the visitation in 2008, saying its aim would be to study the community, prayer and apostolic life of the orders to learn why the number of religious women in the United States had declined so sharply since the 1960s.

Almost a year into the study, Cardinal Rode told Vatican Radio that the investigation was a response to concerns — including some expressed by an unnamed “important representative of the U.S. church” — regarding “some irregularities or omissions in American religious life. Most of all, you could say, it involves a certain secular mentality that has spread in these religious families and, perhaps, also a certain ‘feminist’ spirit.”

As the process began, the Leadership Conference of Women Religious, which represents about 80 percent of U.S. women religious, questioned what its officials considered a lack of full disclosure about what motivated the visitation.

The Congregation for the Doctrine of the Faith’s investigation of the LCWR, begun in 2008, was a separate process; in 2011, the congregation ordered a reform of the organization, saying “the current doctrinal and pastoral situation of LCWR is grave and a matter of serious concern, also given the influence the LCWR exercises on religious congregations in other parts of the world.”

At a news conference presenting the report Dec. 16, the Congregation for Institutes of Consecrated Life and Societies of Apostolic Life invited both the president of the LCWR and the chairwoman of the smaller U.S. Council of Major Superiors of Women Religious to address the media. They were joined by Mother Mary Clare Millea, superior general of the Apostles of the Sacred Heart of Jesus and the apostolic visitor appointed by the Vatican.

The congregation’s final report says that while apostolic visits are “a normal instrument of governance” designed to “assist the group in question to improve the way in which it carries out its mission in the life of the church,” the visitation of U.S. women religious “was unprecedented” in many ways.

“It involved 341 religious institutes of both diocesan and pontifical right, to which approximately 50,000 women religious throughout the United States belong,” the report says. Only communities of cloistered nuns were excluded.

“It is important to note, however, that the very large numbers of religious in the 1960s was a relatively short-term phenomenon that was not typical of the experience of religious life through most of the nation’s history,” the report says. “The steady growth in the number of women religious peaked dramatically from the late 1940s through the early 1960s, after which it began to decline as many of the sisters who had entered during the peak years left religious life, the remaining sisters aged and considerably fewer women joined religious institutes.”

Citing a wide variety of founding principles, ministries and community sizes, the congregation’s final report notes an overall trend of “aging and diminishment” in the number of members.

Most religious communities, it says, “are expending considerable spiritual and material energies in the area of vocation promotion,” but many of them are obtaining results “not commensurate with the expectations and efforts.”

“Vocation and formation personnel interviewed noted that candidates often desire the experience of living in formative communities, and many wish to be externally recognizable as consecrated women,” it says, in an apparent reference to the wearing of traditional habits. “This is a particular challenge in institutes whose current lifestyle does not emphasize these aspects of religious life.”

The congregation’s report does not make specific recommendations other than urging the entire church “to offer fervent prayer for religious vocations” and to ask religious communities to ensure they provide “a solid, theological, human, cultural, spiritual and pastoral preparation” for religious life.

NEXT: Though painful at times, visitation was positive, speakers say