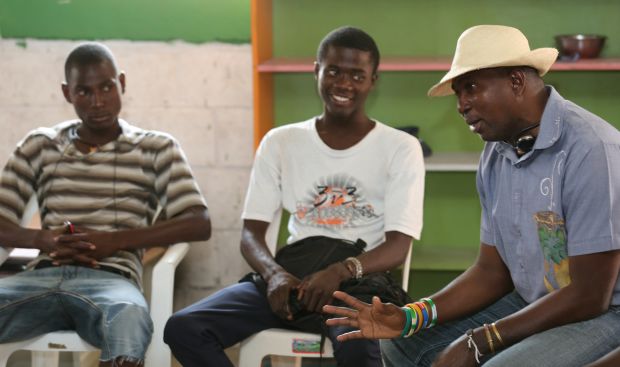 Daniel Tillias, executive director of SAKALA, speaks with young people during a group session at the community center in the Cite Soleil neighborhood of Port-au-Prince, Haiti, Feb. 14. SAKALA is a peacebuilding program for youth sponsored by Pax Christi Haiti. (CNS photo/Bob Roller)

PORT-AU-PRINCE, Haiti (CNS) — Mentor Elison wants peace for the little kids, if for no one else, in Cite Soleil.

The 19-year-old aspiring doctor wants the kids to feel safe when going to school, to have a safe haven when they get home.

That’s not always the case in Cite Soleil, the sprawling poverty-mired 300,000-strong community on the northern edge of the Haitian capital where violence is common and armed groups often fight over turf in gun battles and through intimidation.

Elison finds no attraction in that.

He has decided to promote peace by how he lives using the skills he has learned through SAKALA, a peacebuilding program for youth sponsored by Pax Christi Haiti.

Elison’s quest began eight years ago when he first showed up at SAKALA, which had organized a soccer team and a dance program to give children positive alternative activities. He played soccer and joined the dance troupe and mingled with kids from other Cite Soleil neighborhoods. He said he realized, “We are all one.”

Today, Elison relishes being a role model for youngsters. He also volunteers in the community, visiting sick and elderly neighbors, and works in SAKALA’s community vegetable garden. 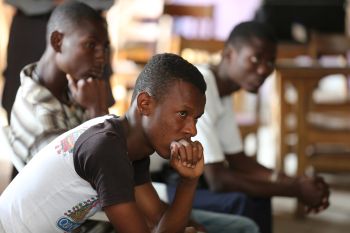 SAKALA was started in 2006 by Daniel Tillias, who was raised in a Catholic family that was considered middle class in Cite Soleil. He recalled that few outsiders, including government and nongovernment agencies, paid much attention to what was going on in the community. Today, Tillias, 37, is SAKALA’s executive director. It’s a volunteer position; he has been joined by several other volunteers as well.

The operation has no budget, although Tillias said he recognizes that must change so it can continue to grow and involve more young people.

Tillias said was motivated to help kids bypass the road to violence because he had parents who made sure he attended classes and stayed away from trouble. After college he wanted to do the same for the kids in Cite Soleil.

“What’s going on right now is what inspired me,” Tillias said, referring to SAKALA’s wide-ranging programs. He said he was concerned seeing “kids with so much potential … become victims because of the negligence of the state” and lose hope for a better feature.

“I thought, ‘We can’t let this keep going like that. We needed to do something,'” he explained.

Tillias settled on the name SAKALA — Sant Kominote Altenatif Ak Lape in Creole (Community Center for Peaceful Alternatives). As a word, sakala translates to “we will find our way together.

Tillias affiliated with Pax Christi after learning about the organization from U.S. Catholic peacemakers, including retired Auxiliary Bishop Thomas J. Gumbleton of Detroit. The bishop visited SAKALA on solidarity trips to Haiti after the country’s 2010 earthquake.

The program’s headquarters is just 500 feet from where Tillias grew up, and he often visits his old neighborhood and others. Sure, he must be careful, he said, but he claimed to never have been threatened by the crime rings.

The center’s main gate is covered with positive words in Creole: education, peace, justice, respect and community. Off to the side on a concrete block wall are painted images of weapons, drugs and alcohol bottles with a red circle and slash through them, indicating what is not permitted onsite.

SAKALA is located on the site of a former baseball factory. Tillias convinced the owners to let them use an abandoned building on the land after the earthquake and later to clean an adjacent plot and turn it into an urban garden.

SAKALA’s soccer team for 17-year-olds has developed to the point that it has played one of the Haitian national teams and played in the neighboring Dominican Republic. Known as the “peace team,” players wear jerseys with the names of historic peacemakers, such as Mahatma Gandhi, Dorothy Day, St. Francis and the Rev. Martin Luther King Jr.

Overall, the program serves 300 young people. In addition to soccer and dance, SAKALA raises money to help cover tuition so children can attend school outside of Cite Soleil. It provides employment opportunities and job skills training to at-risk youth and young adults.

There also are weekly discussion groups. Limited to 24 members each, the groups focus on different topics — what volunteer Franz Francois calls a microplatform for peace. The gatherings allow participants to discuss issues of concern or the effect of violence on their lives.

Participant Justin Jesula, 21, has found her group helpful in her life. She said she has seen young people change their attitudes after becoming involved in SAKALA.

“The training and education they received have helped them become a very good human being,” she said.

“It’s really creating the rising aspirations so the path is not to a gang, but developing more youth leaders who would become the model for younger kids here,” he said, adding he hopes to see it expand into other neighborhoods.

NEXT: To protests deaths, Mexicans mark ’43’ instead of cross in ashes