Let all the nations sing in Philadelphia 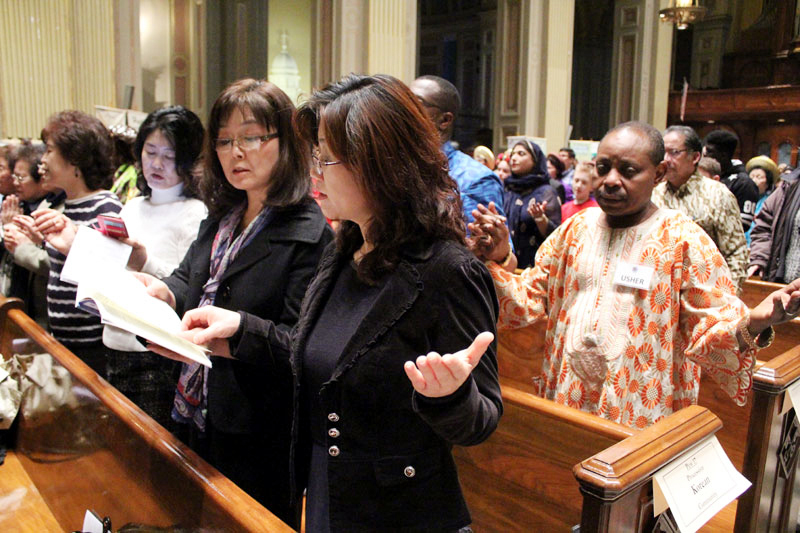 Members of the Korean and Liberian Catholic communities -- and many more ethnic groups -- participate in the 18th annual Cultural Heritage Mass March 14 at the Cathedral Basilica of SS. Peter and Paul. (Sarah Webb)

The theme of “One Faith, Many Cultures, One Family” was an apt one for the hundreds of participants from 25 ethnic communities celebrating their diversity and unity in the Archdiocese of Philadelphia at the Cultural Heritage Mass March 14 at the Cathedral Basilica of SS. Peter and Paul.

A committee of almost 40 volunteers met, planned and worked diligently for more than three months on the 18th annual Mass, sponsored by the archdiocesan Office for the Pastoral Care of Migrants and Refugees.

The hard work paid off in a successful event, as evident in the entrance procession where participants dressed in the attire of their culture and carried banners indicating their family’s country of origin. All the people honored their heritage and showed their unity in the celebration of the Mass.

“We have a global church in Philadelphia and so we celebrate who we are when we celebrate a Mass like that,” said Matt Davis, director of the Office for Pastoral Care of Migrants and Refugees.

Sister Florence Enechukwu, who serves the African Catholic communities in Philadelphia, had attended the Mass for years but never got involved with its planning until last year.

Now she helps to coordinate the seven choirs from throughout the archdiocese that sing in different languages during the Mass.

“It can never be overemphasized in this time, in our society, in our present generation, that the Archdiocese of Philadelphia is a global church,” said Sister Florence. She said it is important for everyone to celebrate the different cultures as one family under one God, and she invites all the communities of the archdiocese to “come and see the universality of the Catholic Church.”

Another volunteer, Sister Gertrude Borras who serves the Filipino Catholic community, said the Cultural Heritage Mass offers “the opportunity to celebrate our faith as a multicultural community … not only in our own language but particularly in our native customs and traditions.”

She added that the celebration of the Mass is “an acknowledgement by the Archdiocese of Philadelphia that we, a cultural community, belong to the archdiocese.”

As with so many aspects of the faith, “personal contact” is the key when inviting communities to participate in honoring their ethnic diversity, Davis said. For this year’s Mass, communities representing the Ivory Coast, Cameroon and Maronite Catholics – an ancient Catholic rite based in Lebanon — participated for the first time.

The planners of the Mass invite all parishes of the archdiocese to participate and celebrate the Eucharist at next year’s Cultural Heritage Mass. The colorful banners, native cultural dress and the different languages brings a richness that “feels like a glimpse of what we think the Kingdom of God and what heaven will be like,” Davis said.