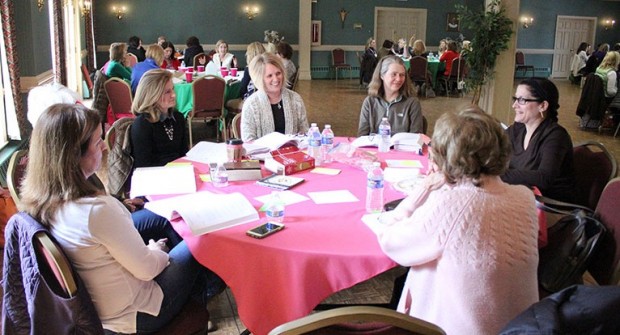 Cynthia Castaldi (right), one of the leaders of the program, discusses Scripture with the women at her table at St. Isaac Jogues Parish. (Sarah Webb)

Parish-based Bible study groups are especially popular at this time of year and typically there is a core group of parishioners who will meet weekly during Lent to study Scripture as a handy devotional in preparation for Easter.

Now what would you say about a Catholic Bible study group that meets in a parish weekly for 22 weeks in the year, is totally lay conducted, is open to people of all faiths and conditions in life and may attract 100 or more people weekly?

Well, not all conditions in life. It is for women only, and it is especially welcoming to mothers with small children. When needed, on-site day care is provided for preschoolers while mothers attend the meeting.

It’s called “Walking with Purpose” and it was founded in 2002 in Annapolis, Maryland, by laywoman Lisa Breninkmeyer, who was herself a convert to Catholicism.

(See our photo gallery of a typical session of the program at St. Isaac Jogues Parish in Wayne.)

At this time seven such groups are operating in the Philadelphia area, with the groups at St. Thomas of Villanova and St. Isaac Jogues, Wayne, the oldest. Each has about 120 women attending a week.

Lisa Corcoran, who was coordinator of the program at St. Isaac for its first six years, like many members of the group is a member of a different parish, in her case St. Norbert in Paoli.

“When we started we had 40 women and we’ve grown,” she said. Although each year some members leave to start a new group in another parish, on the whole there is a retention rate of about 90 percent, year to year, Corcoran estimates.

Each year there is a new study guide; this year it is “Keeping in Balance,” but new members are encouraged to take the foundational course, “The Better Part.”

The group meets on Wednesdays, starting in autumn and ending in spring, skipping weeks with religious or other holidays. The meetings generally run from 12:45 to 1:15 p.m. Most of the women do not work outside the home, but some who do take an extended lunch hour for the meeting.

At this time there are about 10 preschoolers in the child care program who are given an age-appropriate “Kids for Jesus” program of their own. Corcoran, the mother of nine, no longer has children in the day care, but her two youngest were in it before they started school.

Members of the group are expected to prepare for the meeting by reading the study guide and the selected Bible texts, with small group discussions at the meeting. There are also monthly inspirational videos and Connect Coffee Sessions uniting the larger group.

“It’s fabulous. I’ve always been Catholic but this helps me have a deeper understanding of my faith,” Corcoran said. ”I went to Catholic school, but we were not attached to the Bible.”

Of special interest to her is exposure to those parts of the Bible she had never studied, especially “the beautiful women in the Bible. This makes them come alive,” she said.

Anna Coombs, a member of Our Lady of the Assumption Parish in Strafford, is now co-coordinator of the St. Isaac group along with Cynthia Castaldi of St. Norbert Parish.

She’s been with the group three years, and joined after a friend at the local swimming pool mentioned belonging to the Bible study.

It isn’t just attending one meeting a week, she explained. It is recommended that the members study the lessons which will be discussed in the small groups over five nights each week.

“The course brings us all through various parts of Scripture,” she said. “We want to be women walking through life reflecting God’s purpose for us, being the women God has called us to be. We are encouraged to embrace the dignity (that) we are daughters of the King.”

For her own life, Coombs said, “I am learning to love others through the hardships they are facing and embracing the joys they are going through. There is the fellowship of the women and every week going to a different place in Scripture that maybe I haven’t visited in a while. The Spirit reveals something to me new and fresh.”

Jillian Buhl is a member of the St. Thomas of Villanova group, but her parish is St. John the Baptist in Manayunk. The Villanova group does not have a day-care component because it splits into two Wednesday sessions. One hosts about 85 women in the afternoon and 35 in the evening. Like the founder of “Walking with Purpose,” Buhl, the mother of two, is a convert.

She is a board member of the national organization, which conducts most of its board meetings through Google Hangout.

Buhl said there are 78 groups in the U.S., mostly on the East Coast and there are also one group each in Canada, Italy and Switzerland, although the course material has not yet been translated into languages other than English.

“There are about 5,100 women involved, completely lay,” Buhl said. “It is a parish-based program but people can come from different parishes.  It has brought encouragement to a lot of women.”

PREVIOUS: Let all the nations sing in Philadelphia

NEXT: Looking back on religious freedom, and where it’s headed