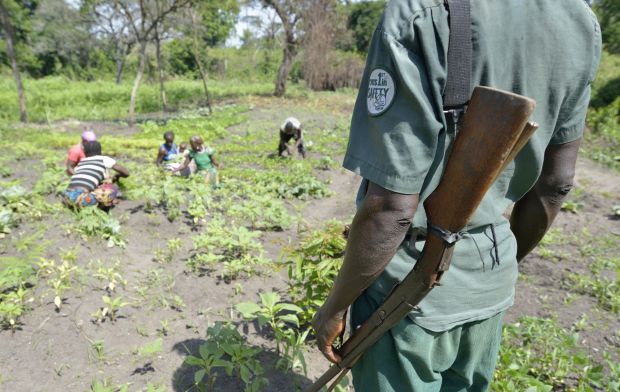 GANGURA, South Sudan (CNS) — Much of the world knows there’s a war in South Sudan, a bloody feud between two rival politicians and their respective ethnic groups.

Yet the conflict has had little impact on life in this remote corner of South Sudan, tucked against the country’s border with Congo. Even attacks from the Lord’s Resistance Army had stopped for much of the past two years, giving farmers the hope they could sow and harvest their crops in peace.

However, the LRA returned in early March, local church leaders said, sending families fleeing once again for the relative safety of nearby towns.

Once a Ugandan rebel movement, the LRA long ago morphed into a regional terrorist group famous for kidnaping children and converting them into soldiers.

In recent years, the armed group has operated mostly in isolated areas of the Central African Republic and Congo. Then several dozen LRA troops attacked Gangura about March 8, stealing food and kidnapping 13 people, said Anthony Bagura, a Catholic catechist in the community.

He told Catholic News Service that a local self-defense militia, known as the Arrow Boys, gave chase to the LRA, killing one and driving its forces from the area. One member of the Arrow Boys also was killed.

Under frequent attack by the LRA, most of the people fled the area in 2006, returning five years later as the marauders reportedly moved away and persistent hunger brought the displaced back to rural farming areas.

People also were encouraged to return home by the arrival of a detachment of Ugandan soldiers specially tasked with tracking down Joseph Kony, the LRA’s murderous leader who has been indicted by the International Criminal Court. Since 2011, Ugandan troops have been assisted by U.S. special operations forces, based in nearby Nzara, but community members complain the soldiers have had little impact on the situation on the ground.

“No one seems to care enough to stop the LRA. We have United Nations soldiers. We have Ugandan troops. We have U.S. soldiers, though I haven’t seen them. We have our own police and soldiers. But the LRA comes and attacks us, and we’re left to fight them on our own,” Bagura said.

“We don’t have guns, so how are we supposed to fight people with guns? Some of our Arrow Boys don’t have many guns, just bows and arrows. And the guns they do have are homemade and shoot just once. How can they fight with people with big guns?” he said.

The Arrow Boys were born in the last decade from a deep frustration with the inability of regular troops to protect scores of vulnerable communities along the border. The South Sudan government has been nervous about the existence of such independent militias, especially since civil war broke out in Juba, the nation’s capital, at the end of 2013.

The area’s Catholic bishop, who has expressed reservations about the Arrow Boys in the past, now says the groups have earned widespread respect.

“One thing that’s clear is that the communities are happy with them and trust them more than the army,” Bishop Barani Eduardo Hiiboro Kussala of Tombura-Yambio told CNS. “When the LRA appears, the Arrow Boys are there to defend them, instantly. People don’t have to wait for the mobilization of the army. If the LRA appears, the Arrow Boys are running after them. That’s why the government is afraid to criticize them. They are doing the government’s work. If the government were to try to disarm them, the communities would rise up. So the government now passively recognizes their presence.”

Erisha Dowdy, an Arrow Boys leader, said the group leverages its knowledge of the forest into a tactical advantage over the better-equipped LRA combatants. Dowdy himself carries a rusty homemade shotgun that looks it would self-destruct if he attempted to fire it.

Bishop Hiiboro said the militia group gets no financial help or arms from the government, and obtains its ammunition illegally or through friends.

The bishop said if the LRA ever demobilizes, the Arrow Boys hopefully will disarm. He said the church has been pushing livelihood programs to “make sure the Arrow Boys don’t look for alternatives and start making problems. We need to support them as they grow their crops and send their children to school.”

In cooperation with Caritas Austria, the diocese has been forming farmer groups along the border, leveraging the organization already achieved by the Arrow Boys into community support for sustainable development. The groups grow vegetables and other crops to supplement their household diet as well as to sell at nearby markets, providing much needed cash for medicines, clothing and school fees.

“This area was once the green belt of the country, but then came the wars. We want to help people overcome the trauma of the violence and increase their production back to where they can once again be producing food for a large area,” said Matthias Fettback, director of the Caritas Austria program in the diocese.

Without the Arrow Boys, Caritas Austria’s program could not get off the ground, Fettback said.

“The farmers and the Arrow Boys are the same people. They are a very well-organized self-defense force, ensuring security and stability in the area,” he said. “And with them around the community feels safer. You need to feel safe and secure if you’re going to invest time and energy and resources in planting seeds in the ground.”