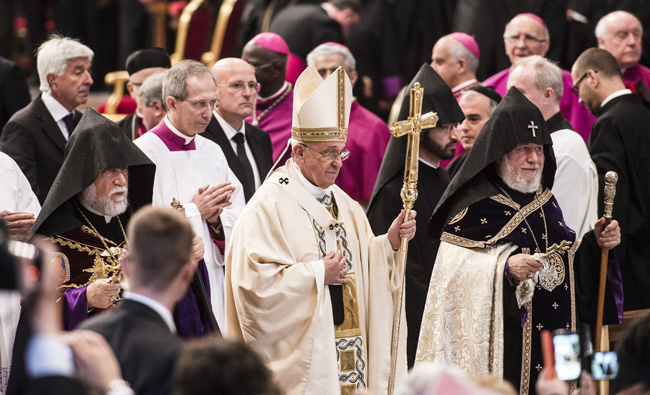 Pope Francis is flanked by Catholicos Aram of Cilicia, Lebanon, left, and Catholicos Karekin II of Etchmiadzin, patriarch of the Armenian Apostolic Church, as he leaves after celebrating an April 12 Mass in St. Peter's Basilica at the Vatican to mark the 100th anniversary of the Armenian genocide. (CNS photo/Cristian Gennari) 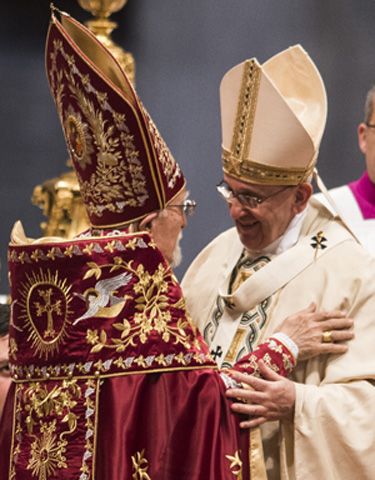 Media attention focused on the diplomatic tensions created between the Vatican and Turkey when Pope Francis used the term “genocide” to describe the deaths of up to 1.5 million Armenians at the hands of the Ottoman-Turkish empire in 1915-18.

While the Mass marked the 100th anniversary of the genocide, Pope Francis also used the occasion to encourage ecumenical relations and to declare St. Gregory of Narek a doctor of the church. The 10th-century Armenian monk is venerated by both Catholics and Orthodox.

At the end of the Mass, Pope Francis handed a message to Catholicos Karekin expressing his hopes that the centennial of the genocide would be “a time of deep prayer” for Catholics and Orthodox. “Through the redemptive power of Christ’s sacrifice, may the blood which has been shed bring about the miracle of the full unity of his disciples,” the pope wrote.

The fact that those who died in 1915-18 were Christians, both Orthodox and Catholic, is a sign of “the ecumenism of blood,” a unity that exists through common suffering, the pope said. Commemorating their deaths together, he said, “reflects on earth the perfect communion that exists between the blessed souls in heaven.”

Speaking at the Mass, Catholicos Karekin prayed that “the martyrs would unite us as children and servants of the one Lord Jesus Christ so that we would learn and commit ourselves to establishing love, justice and peace in the world.”

The Armenian Orthodox officially distanced themselves from Rome and Constantinople in the sixth century; the churches now commonly referred to as Catholic and Greek Orthodox differed with Armenian church leaders and other Oriental Orthodox bishops over theological explanations of Christ’s identity as both human and divine.

But throughout history contacts continued between members of the various Christian communities and, in fact, at the end of the 12th century Armenian Orthodox and Roman Catholic leaders in Cilicia (now in southern Turkey) re-established full unity. But the agreement was not accepted by all Armenian Orthodox.

A new attempt was made at the Council of Florence in the 15th century and the foundation was laid for a formal structure for the Armenian Catholic Church, preserving the liturgical and spiritual heritage of Armenian Christianity. Pope Benedict XIV in 1742 named the first Armenian Catholic Catholicos for the community.

The Armenian Orthodox sent observers to the Second Vatican Council and were seen as early promoters of the modern ecumenical movement.

In 1996, the patriarch of the Armenian Apostolic Church and Pope John Paul II signed a joint declaration officially ending more than 1,500 years of doctrinal disagreement over the theological explanation that Christ is one person in two natures, undivided and unconfused. Through dialogue, the churches declared they profess the same faith in Christ and said the differences that drove the churches apart in the sixth century were semantic rather than doctrinal.

The Armenian Apostolic Church has more than 6 million members today. While based at Etchmiadzin, near Armenia’s capital, the devastation of the genocide, World War I and decades of Soviet domination led to widespread emigration. The church has dioceses around the world.

The Armenian Catholic patriarchate is based in Beirut, Lebanon; its more than 566,000 members are served by dioceses and other structures in Lebanon, Iran, Iraq, Syria, Egypt, Turkey, Jerusalem, Ukraine, Greece, Latin America and New York.