Report: Only ‘full recognition of religious freedom’ will protect people 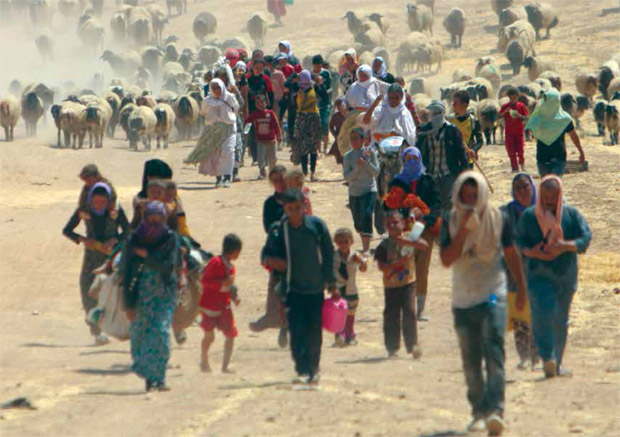 The cover image for the 2015 annual report of the U.S. Commission on International Religious Freedom.

WASHINGTON (CNS) — The cover photograph on a new 232-page report outlining religious freedom violations around the world last year pretty much says it all.

The image is of Yezidis of all ages walking on a sandy, dusty terrain with sheep. Thousands of members of this religious minority had been executed and assaulted last year while others were forced to flee their ancient homeland in the Nineveh plains of Iraq by actions of the Islamic State, known as ISIS.

The horrors inflicted upon the Yezidis illustrate a key point of the 2015 report by the U.S. Commission on International Religious Freedom, namely that religious freedom violations not only occurred worldwide in 2014 but that the world also witnessed “violence masquerading as religious devotion.”

The Yezidis, Kurds, Christians and Shiite Muslims, were the focus of ISIS attacks as part of the militant group’s claims that it was purifying the world by killing or displacing those who did not adhere to its radical interpretation of Islam beliefs.

The U.S. Commission on International Religious Freedom, formed in1998 as a watchdog group to monitor religious freedom violations and make recommendations to the president, State Department and Congress, highlighted the vast numbers of people displaced because of their religion in this year’s report.

The report’s introduction also singles out Boko Haram in Nigeria for its attacks on Muslims and Christians including mass murders at churches and mosques, kidnappings of children from schools and displacement of more than 1 million people. It also said 140,000 Rohingya Muslims and at least 100,000 largely Kachin Christians were displaced in Burma.

“By any measure, the horrors of the past year speak volumes about how and why religious freedom and the protection of the rights of vulnerable religious communities matter. Those responsible for the horrors have made the case better than anybody can,” the report states.

After highlighting the countries that have displaced so many of its citizens the report says: “it should come as no surprise that in the pages of this report, we have recommended that the United States designate all five of these nations — Iraq, Syria, Nigeria, Central African Republic and Burma — as countries of particular concern, or CPCs, under the International Religious Freedom Act.”

The commission’s chair, Katrina Lantos Swett, said in an April 30 statement when the report was issued that “all nations should care about abuses beyond their borders not only for humanitarian reasons but because what goes on in other nations rarely remains there. In the long run, there is only one permanent guarantor of the safety, security and survival of the persecuted and vulnerable. It is the full recognition of religious freedom.”

Along with countries previously mentioned, the report suggested that the State Department add Egypt, Pakistan, Tajikistan and Vietnam to the list of countries of particular concern joining those countries already on the list: China, Eritrea, Iran, North Korea, Saudi Arabia, Sudan, Turkmenistan and Uzbekistan.

The State Department’s list of countries of particular concern has essentially been the same for the past 10 years. This year was the first time the Commission on International Religious Freedom recommended that the Central African Republic be added to this list because of the country’s ethnic cleansing of Muslims, destruction of hundreds of mosques and displacement of more than 1 million people.

The commission also listed 10 “Tier 2” countries where religious freedom violations are serious but not at the same level as countries of particular concern. The list was the same as last year: Afghanistan, Azerbaijan, Cuba, India, Indonesia, Kazakhstan, Laos, Malaysia, Russia, Turkey and Malaysia.

Countries the report listed in the category of “need for concern” that didn’t reach a tier level are Bahrain, Bangladesh, Belarus, Cyprus, Kyrgyzstan and Sri Lanka.

The report urged the U.S. to pay particular attention to listed countries and to also prosecute ISIS militants by supporting an investigation of the atrocities they have committed through the U.N. Security Council to the International Criminal Court.

Jesuit Father Tom Reese, a columnist for the National Catholic Reporter, was appointed to the U.S. Commission on International Religious Freedom by President Barack Obama in 2014. In an April 30 column in the newspaper based in Kansas City, Missouri, he pointed out that the countries of particular concern “should warn us against thinking that religious freedom will improve by simply exhorting religious people to be more tolerant. This is important, but not enough.”

“Living in a country where religious freedom is enshrined in our political system is a blessing we don’t truly appreciate until we see how believers can be persecuted and oppressed in other countries,” he added.

NEXT: U.S. will fall in love with Pope Francis when he visits, says author