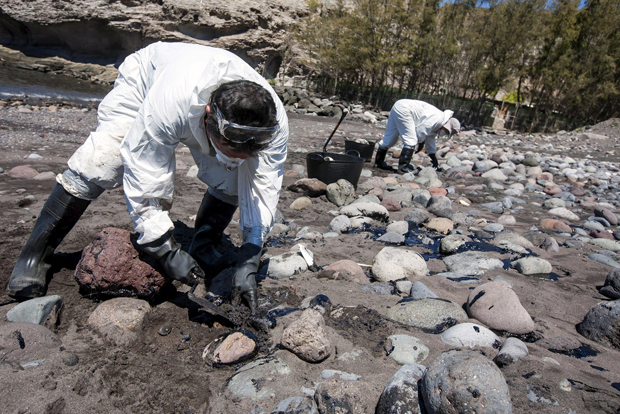 MEXICO CITY (CNS) — Pope Francis aims to touch the hearts of people so that they act to stem climate change and change their lifestyle to reduce negative impacts on the planet in his encyclical on the environment, said a priest at the Pontifical Catholic University of Argentina.

Carmelite Father Eduardo Agosta Scarel, a climate scientist at the university, described the encyclical, “Laudato Si’, on Care for Our Common Home,” as a pastoral statement rather a scientific document.

“It is dedicated to giving hope and mobilizing communities to understand the urgency of the present time, confronting the great environment and social-global challenges, starting with a healthy, personal revolution of the heart, an ecological conversion,” he said.

Released June 18, the document “offers a way of integrating the connection between environmental justice and social justice, which has often been disassociated in our Catholic communities,” he said.

“It has always seemed like worrying about the environment distracted us from the option for the poor. However, carrying for creation is integral. The environment and the quality of life of men and women go hand in hand.”

Bishop Jorge Lugones of Lomas de Zamora, Argentina, director of the environment section of the Argentine bishops’ conference’s social ministry, said the encyclical points to the connection between society and the environment and the need to address the challenges to both simultaneously.

“It’s one, single socio-ecological crisis,” he said. “There are not two crises that can be separated. We cannot put the environment at the center or man at the center as owner of creation. We have to coexist.”

Two Mexican bishops said they were pleased that Pope Francis offered his views on the environment and other social issues for the world to study.

“It is now undoubtedly a priority (the environment,) given that the Holy Father has written this encyclical and provided the evidence that this is an important issue and, above all, the indifference that exists in many places and that we do not realize the damage that we have been doing,” Bishop Ramon Castro Castro of Cuernavaca told CNS.

“Others bishops’ conferences have spoken on this issue … but now it’s the pope with his authority and with the attention that this is receiving, it’s going to create much more consciousness.

Archbishop Carlos Garfias Merlos of Acapulco said the encyclical offers guidance to learn about the challenges facing the earth and its inhabitants and for all people to “take actions.”

“We now have some simple programs, dealing with reducing garbage and managing water that we are implementing in the four dioceses of our province. With what the pope is saying, this gives us a push to accelerate these programs,” he said.

The encyclical reflects what Catholic charities’ workers see every day, said Cardinal Luis Antonio Tagle of Manila, president of Caritas Internationalis. “I visit communities where people are living on trash heaps. Children are born in trash, grow up and die there. They feel like trash. This is not God’s creation, this is man-made,” he said.

“Pope Francis is inviting everyone to reflect on this reality. He is calling on us to ‘aim for a new lifestyle,’ to change the economic structures that have caused so much harm and regain our responsibility for others and the world,” the cardinal said in a statement released at the Vatican by Caritas Internationalis.

An official of the Catholic Bishops’ Conference of India said the encyclical elevates the church’s “powerful voice on the moral imperative of advancing justice, defending human dignity and protecting the poor” while emphasizing the pope’s view of a clear link between defending the environment and delivering social justice.

“It is our duty to do all we can to secure a safe planet, our common home, for us and all future generations,” said Father Charles Irudayam, secretary of the Indian bishops’ Office for Justice, Peace and Development. “We expect Pope Francis’ message will resonate in every corner of the world and bring an ecological conversion that can inspire us to greater creativity and enthusiasm in our efforts to safeguard our mother earth.”

The encyclical will help to bring Africans “to a new understanding of how to deal with environmental issues of great concern to us, such as energy,” Father S’milo Mngadi, communications officer for the Southern African Catholic Bishops’ Conference, said in a June 18 telephone interview from Pretoria.

With the pope’s emphasis on taking responsibility for the environment’s well-being, South Africans will be challenged to do their part in conserving energy, Father Mngadi said.

South Africa’s “electricity crisis cannot be solved simply through price hikes,” he said, noting that “we need to move away from coal and find other sources of energy that are renewable.”

South Africa’s power utility is unable to meet electricity demand and there are scheduled rolling blackouts throughout the country.

The encyclical, which will be translated into local languages and distributed to parishes in South Africa, Swaziland and Botswana, “will serve to close the gap between spirituality and environmental responsibility,” Father Mngadi said.

“In South Africa, the focus on spirituality tends make people aloof from day-to-day life,” he said.

“The pope reminds us that we are grounded here on earth,” he said.

In East Africa, Bishop Emanuel Barbara of Malindi, Kenya described the pope’s message as a “radical encyclical that opens our eyes to our situation” that should push people across the region to speak loudly about environmental issues.

“We need development program that respects the environment and is tailored to the African context,” Bishop Barbara said in a June 18 telephone interview.

“It is important that we do not copy the development model used in other parts of the world as we now know what happens when development goes ahead with no regard for consequences,” he said.

The encyclical “speaks up for the very poor; for those who are suffering the most through damage done to the environment,” Bishop Barbara added, saying Africa is bearing the brunt of the developed world’s “excessive consumption” and environmental abuses that have sped up climate change.

He also called for African countries to forge stronger links with one another and “speak with one voice” on environmental issues. “We must also be partners in the global economy rather than isolate ourselves,” he said.

In Liberia, Bishop Anthony Fallah Borwah of Gbarnga told CNS that “with the same spirit of unity with which we defeated Ebola, we can save our forests from destruction.”

About two-thirds of West Africa’s remaining rainforests are in Liberia. The forests cover nearly 10 million acres, about 45 percent of the country.

A countrywide awareness campaign similar to that which taught Liberians how to stop the spread of the deadly virus could educate people about the encyclical’s main messages, he said.

The poverty-stricken country relies heavily on the sale of its natural resources.

“Our attitude toward the environment needs to change,” the bishop said, adding that with the new encyclical in hand, “we will help people to understand how and why we should take care of our environment, and that the way we treat animals and plants is crucial to our wellbeing because all creation is connected.”

Archbishop Richard W. Smith of Edmonton, Alberta, said in a statement posted on the archdiocesan website that Pope Francis has “added a vital moral dimension to the global debate about the ecology and environmental challenges we face.”

Calling the encyclical “a hymn of praise and thanks to God for the gift of creation,” Archbishop Smith said only through conversations that address moral concerns will solutions to environmental challenges be overcome.

“This is fundamentally a moral issue. It is precisely this, his widely accepted moral authority, that the pope seeks to contribute to the question of how we best care for the created world and ourselves as part of it,” he said.

United Nations officials, including Secretary-General Ban Ki-moon, welcomed the encyclical and offered their support in efforts to slow climate change.

Ban said in a statement that humanity has a “significant obligation to care for and protect our common home, the planet Earth, and to show solidarity with the poorest and most vulnerable members of society who are suffering most from climate impacts.”

The statement also urged governments to place the “global common good” above national interests to and to adopt an ambitious, universal climate agreement when the Conference of Parties of the U.N Framework Convention on Climate Change convenes Nov. 30-Dec. 11 in Paris.

“This clarion call should guide the world towards a strong and durable universal climate agreement in Paris at the end of this year. Coupled with the economic imperative, the moral imperative leaves no doubt that we must act on climate change now,” she said in a June 18 statement.

Contributing to this story was David Agren in Mexico City and Bronwen Dachs in Cape Town, South Africa.

PREVIOUS: Encyclical comes at crucial time with message for all, speakers say

NEXT: Religious leaders decry arson at Church of Multiplication in Holy Land