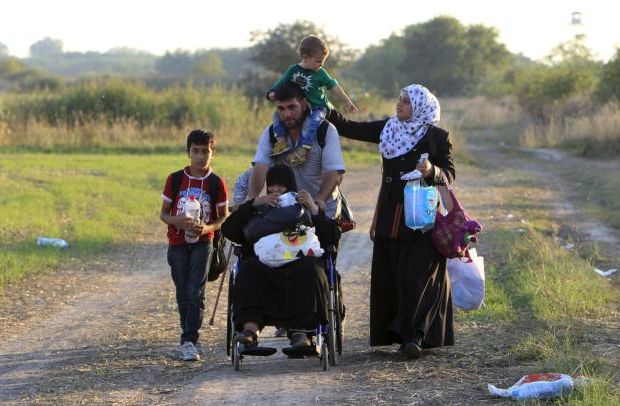 Syrian migrants travel along a road after crossing into Hungary from the border with Serbia near Roszke, Hungary, Aug. 29. About 100,000 migrants, many of them from Syria and other conflict zones in the Middle East, have taken the Balkan route into Europe this year, heading via Serbia for Hungary and Europe's Schengen area of passport-free travel. (CNS photo/Bernadett Szabo, Reuters)

VATICAN CITY (CNS) — “Do something to put a stop to the violence and oppression,” Pope Francis asked the international community after calling attention once again to the fate of persecuted Christians, especially in the Middle East.

“In the context of a tremendous persecution of Christians, he was an untiring defender of the rights of his people, exhorting all of them to remain firm in their faith,” the pope said.

“Today as well, in the Middle East and other parts of the world, Christians are persecuted,” the pope said. “May the beatification of this bishop and martyr fill them with consolation, courage and hope.”

Departing from his prepared text, Pope Francis told people in the square, “There are more martyrs (today) than there were in the first centuries” of Christianity.

He prayed that the beatification would “also be a stimulus for legislators and those who govern so that religious freedom would be guaranteed everywhere. And I ask the international community to do something to put a stop to the violence and oppression.”

The beatification liturgy for Bishop Malke was celebrated in Harissa, Lebanon, Aug. 29, the 100th anniversary of his death. Syriac Catholic Patriarch Ignace Youssif III Younan presided at the liturgy; Cardinal Angelo Amato, prefect of the Congregation for Saints’ Causes was present.

As the Ottoman Empire crumbled in the early 1900s, there were waves of violence and persecution against Christian minorities, especially the Armenians and Syrians. Bishop Malke was the Syriac Catholic bishop of Gazireh, which today is the city of Cizre, Turkey. Although advised to flee, the bishop stayed with his people and was arrested.

Cardinal Amato said the bishop was told that if he converted to Islam, his life would be spared, but he refused and was beheaded.

According to the Vatican, the bishop was born in 1858 in Qal’at Mara in what is now southeastern Turkey. Although his family was Orthodox, he became a Syriac Catholic and joined the Fraternity of St. Ephrem. He was ordained to the priesthood in 1883 and named bishop of Gazireh in 1913.

PREVIOUS: Good, evil come from the human heart, not the outside world, pope says