Time is now to end centuries of prejudice against Gypsies, pope says 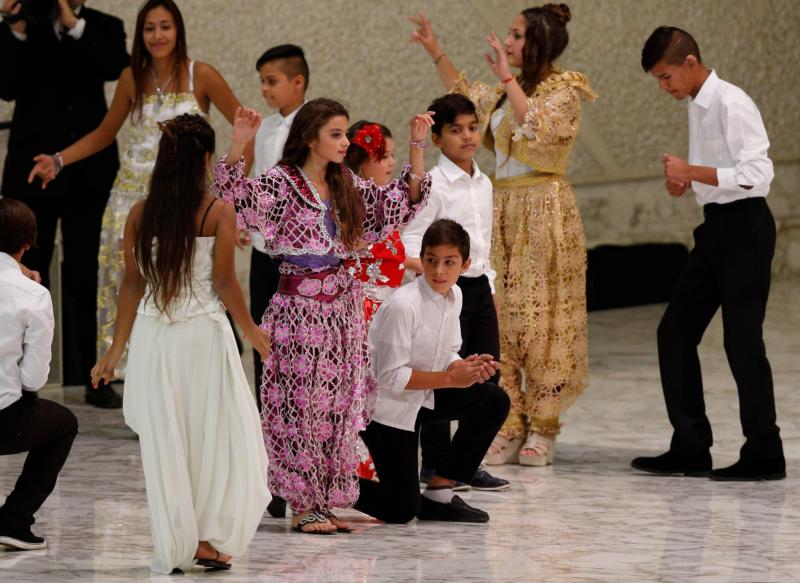 Dancers perform for Pope Francis during an audience with Roma, Sinti and Irish Travelers and other itinerant communities in Paul VI hall at the Vatican Oct. 26. The pope called for an end to centuries of prejudice against Gypsy communities. (CNS photo/Paul Haring)

“The time has come for uprooting centuries-old prejudices, preconceptions and mutual distrust that often are the basis for discrimination, racism, and xenophobia,” he said.

It is time to “turn a new page” and end the indifference, neglect and hostility toward cultures and people who are different, he said Oct. 26 in an audience with more than 7,000 people taking part in an international pilgrimage of Roma, Sinti, Irish Travelers and other itinerant communities.

The pilgrimage, running from Oct. 23-26, was promoted by the Pontifical Council for Migrants and Travelers, the Italian Bishops’ Conference, the Diocese of Rome and the lay Community of Sant’Egidio.

During the audience in the Vatican’s Paul VI hall, musicians played traditional songs that also reflected the various influences of the native cultures of the lands they live in like, Spain, Ireland and Eastern Europe. A group of young Muslim girls and boys danced in colorful dress for the pope to music reminiscent of the Orient.

Commemorating the 50th anniversary of Blessed Paul VI’s Mass for Gypsies in 1965, Pope Francis quoted his predecessor’s words saying, “Wherever you end up, you are considered a nuisance and foreign … Not here. … Here you will find someone who loves you, respects you and helps you.”

While praising the progress made since that historic moment in evangelization, new vocations and social development in Gypsy communities, Pope Francis recognized the continued difficulties, misunderstandings and challenges facing many of them.

They, like all people, have the right to dignified living conditions and employment, an education and health care, he said.

The respect and promotion of these basic human rights are the foundation of peaceful coexistence, “in which different cultures and traditions safeguard their respective values in an attitude, not of closure and contrast, but of dialogue and integration.”

The pope condemned the continued tragedies that unfold in some Gypsy communities, like children dying from the cold or fires caused by arson attacks or faulty heaters; children falling prey to “depraved persons; young people and women who are involved in drug or human trafficking.”

These tragedies happen, he said, “because often we succumb to indifference and the inability to accept customs and ways of life different from ours.”

While urging the church and local communities to do more outreach, Pope Francis also called on the Gypsy communities to do their part in being constructive members of society and “good Christians, avoiding all that is not worthy” of being a Christian, namely, “lies, scams, fraud and fights.”

“Dear friends, do not give the mass media and public opinion the opportunity to speak badly of you. You are the protagonists of your present and future.”

He also urged families to encourage their children to get an adequate education and demand from public authorities, when needed, their kids’ right to sign up for school.

Education contributes to the “healthy development” of the person and gives them the needed skills to enter the work world, he said.

NEXT: Bishops from around the world plead for climate change action