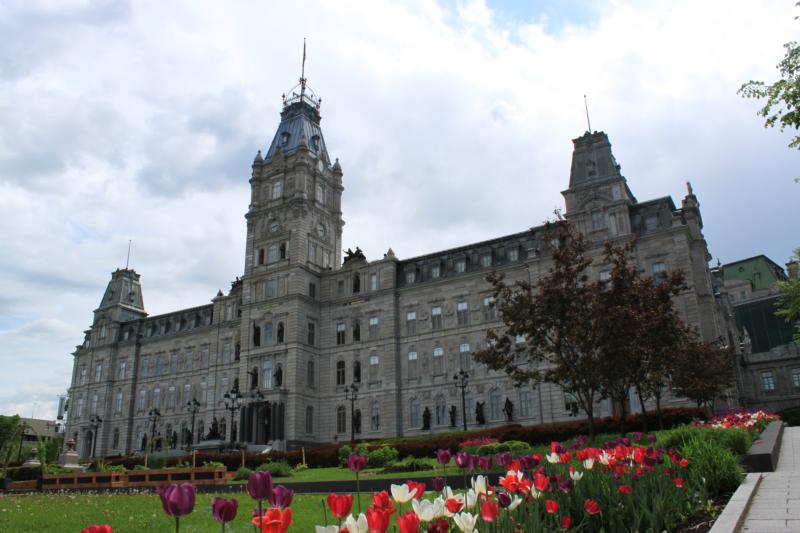 The Quebec Parliament is pictured in Quebec City in 2014. As Quebec's new end-of-life care law will come into effect in December, a first palliative care facility announced that it will be offering medically-induced death. (CNS photo/Philippe Vaillancourt, Presence)

MONTREAL (CNS) — Quebec’s new end-of-life care law will go into effect in December, and at least one of its 31 palliative care facilities announced that it will be offering medically induced death, or assisted suicide.

By Feb. 1, La Maison Aube-Lumiere in Sherbrooke will offer this alternative to its terminally ill patients.

Elisabeth Briere, president of the board of directors of the home, said medically induced death will be offered only in “exceptional situations and as a last resort. And only after all other possible means to soothe the patients’ sufferings will have been used.”

“Offering medically induced death is totally coherent with the core values of our general philosophy, which puts the patient at the center of all our interventions. To us, the interests of the patients must always be at the forefront. We also believe that every patient should be offered the possibility to decide, in a free and serene way, how they wish to live the very last moments of their existence,” said Briere.

“When the patient’s sufferings are soothed through proper medical care, end-of-life can be an outstanding opportunity to step back, to reflect on the meaning of life and to deepen our faith. Fear and anxiety about one’s eventual death thus becomes less acute,” said Archbishop Cyr, who also praised the medical and nonmedical staff who offer palliative care.

Quebec’s Act Respecting End-of-Life Care was passed by the provincial assembly in June 2014. The law offers two possibilities to terminally ill patients: palliative care or medically induced death. Quebec is the first of the 10 Canadian provinces to adopt such legislation.

“We respect the freedom of every palliative care facility. They’re all autonomous organizations,” she said.

Briere said La Maison Aube-Lumiere had staff and volunteers take an online survey and discovered that the “vast majority of the respondents are in favor of offering MID to the patients. And that 20 persons still hadn’t yet made up their mind on the issue.”

The Canadian government still must produce new legislation that will respect February’s Supreme Court decision that invalidated the Criminal Code articles regarding medically induced death. Normally, Prime Minister Justin Trudeau would have to propose a new bill by February.

The Canadian Catholic bishops and many other groups and religious leaders have asked the new prime minister not to rush, but to use the derogation clause that would allow his government more time to write a bill.

PREVIOUS: Proclaim the Gospel, not the institution, pope says

NEXT: Church must not worship ‘St. Payola,’ but God alone, pope says