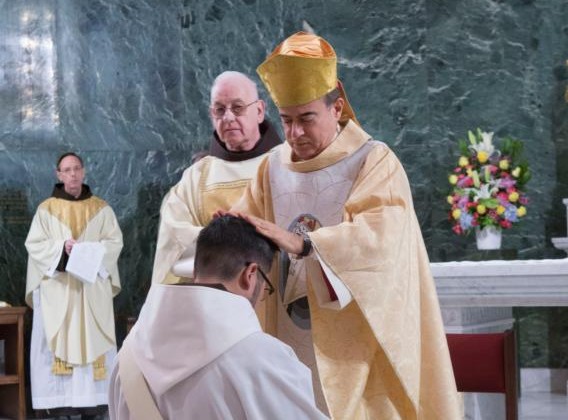 Archbishop Roberto Octavio Gonzalez Nieves of San Juan, Puerto Rico, lays his hands on the head of Franciscan friar Michael Reyes, during his Jan. 16 ordination at St. Francis of Assisi Church in in the Manhattan borough of New York. (CNS photo/Octavio Duran)

SAN JUAN, Puerto Rico (CNS) — The gist of a Catholic archbishop’s opinion, rendered in a guest commentary in a national magazine back in July, is today the basis of a U.S. Supreme Court case that has drawn local and international attention.

“Puerto Rico’s debt comes from a combination of mismanagement, bad luck and its unique colonial status as neither a sovereign country nor a U.S. state,” wrote Archbishop Roberto Gonzalez Nieves of San Juan in Time magazine’s “Ideas” section, which “hosts the world’s leading voices,” according to the publication.

Archbishop Gonzalez’s political reference was given within the context of the larger issue of Puerto Rico’s $72 billion debt. Now his opinion incidentally happens to be the core issue in the U.S. Supreme Court case No. 15-108, Commonwealth of Puerto Rico v. Luis M. Sanchez del Valle, et al., a case about gun charges that raises questions about Puerto Rico’s sovereignty.

The high court heard oral arguments in the case Jan. 13.

Del Valle was charged in Puerto Rico with crimes related to firearms, and a U.S. federal court tried and convicted him for similar crimes. His lawyers said he then could not be tried for the same crimes in a Puerto Rican court. They argued it would violate the Fifth Amendment’s double jeopardy clause, which states a person can only be tried once for a single offense.

The Supreme Court of Puerto Rico ruled in favor of del Valle, saying that as a U.S. territory, Puerto Rico has no separate authority to try someone for the same crime. The U.S. government argues that Puerto Rico is separate from the U.S. and can try del Valle.

Archbishop Gonzalez’s point became a bombshell Dec. 6, after U.S. Solicitor General Donald B. Verrilli filed an unexpected amicus brief, or friend of the court brief, in the case.

“Congress did not enter into an irrevocable ‘compact’ with Puerto Rico,” states the brief. “The designation of Puerto Rico as a ‘commonwealth’ reflects Puerto Rico’s significant powers of self-government, but it does not denote a constitutional status.”

The Justice Department’s brief prompted a mixed reaction in Puerto Rico, some of it anger, some disbelief, because it raised a point that contrasts local traditional interpretations of a 1952 accord between Puerto Rico and the U.S., here called Estado Libre Asociado (Free Associated State), known as a “commonwealth” on the mainland.

A Compact of Free Association applies to jurisdictions administered under the Trust Territory of the Pacific Islands — Palau, Micronesia and Marshall Islands — after World War II.

In remarks from the bench during oral arguments, Justice Stephen Breyer said, “If we simply write an opinion and it says Puerto Rico is sovereign, that has enormous implications. The insular cases are totally changed in their applications.”

“On the other hand, if we write an opinion that says it’s just a territory,” he continued, “that has tremendous implications. How did we tell the U.N. it wasn’t a colony? Why are we not reporting on this colony every year? So either way, between those two, the implications in law and in politics and everything else are overwhelming.”

Puerto Rico is considered “the world’s oldest colony” by the international community. It was discovered by Spain in 1493, held by that country as a colony for 400 years, and then turned over to the U.S. in 1898 as a part of a Spanish-American War settlement. The island received some autonomy in 1947; its constitution was approved by Congress in 1952.

Following a U.S. proposal, the United Nations removed Puerto Rico from its list of colonies in 1953. In its procedure, the U.N. General Assembly did not apply its full list of criteria to determine whether Puerto Rico had achieved self-governing status.

For the past 40 years, the U.N. Special Committee on Decolonization has passed 27 resolutions supporting Puerto Rico’s right to self-determination, the most recent approved in June 2009. None of the resolutions has made it to General Assembly voting.

For the most part, the local political establishment all along had its own interpretation of the island’s relationship with the U.S., leading to the general notion that Washington has a direct responsibility to help Puerto Rico with its decade-old recession. But some, like Archbishop Gonzalez, have been warning that the island’s recent financial woes are rooted precisely in its political relationship with the U.S.

“The crisis Puerto Rico faces is structural,” said Rolando Emmanuelli Jimenez, a lawyer and political columnist in Ponce, the island’s second largest city. “It’s not about the capitalist economy’s demands. Puerto Rico doesn’t have an economic model, nor sovereign powers to fully control its economy, nor can it print its own legal tender.”

Many local political analysts have speculated that the U.S. might be getting ready to end its current relationship with Puerto Rico.

Along with comments on the island’s political status, Archbishop Gonzalez had a suggestion: “First and foremost, Puerto Rico needs debt relief. Puerto Rico’s lenders should cancel some of the island’s debt, extend other payments into the future.”

Deadlocked with lenders over debt payments, Puerto Rico Gov. Alejandro Garcia Padilla announced Dec. 30 that the government was defaulting on roughly half of its $757 million obligations due the next day. “We don’t have the resources. This cannot fall only on Puerto Ricans. Bond holders are beginning to participate in the responsibility,” he said.

Archbishop Gonzalez has been criticized by some politicians and media outlets for speaking out defending “the interests of the motherland,” using words considered to have leftist connotations in local moderate and right-wing circles.

In closing the Puerto Rican bishops’ “ad limina” visit to the Vatican last June, Pope Francis’ final message included the remark, “Know how to distance yourselves from all political ideology or inclination. … The church, because of its mission, is not tied to any political system.”

Upon returning from the Vatican, the archbishop issued a statement on those remarks by the pope, saying: “These are profound expressions that should help not only bishops, but also all Puerto Ricans, to reflect upon the importance of building our motherland, the duty to love it, protect it, steward it, and the mission to honor its roots,” he wrote. “In our case, those roots emerge mainly from the Christian Catholic world view.”

NEXT: Push for legalizing assisted suicide stalls out in New Jersey Senate