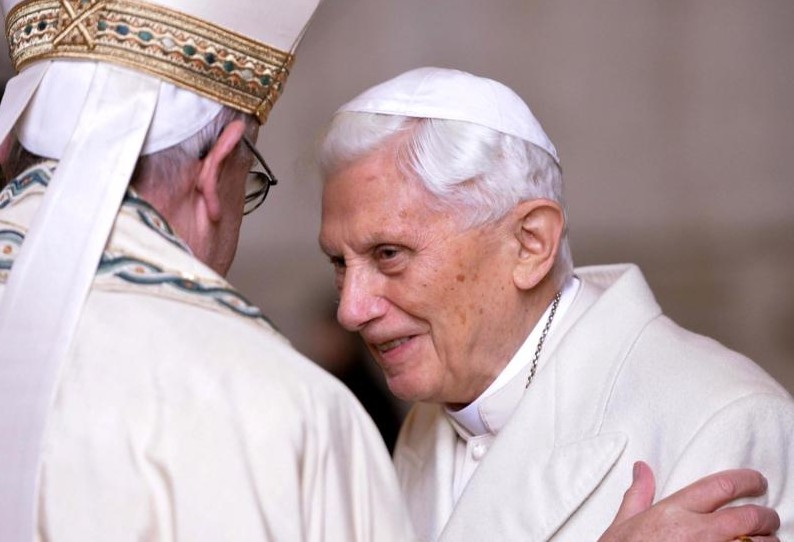 Pope Francis greets retired Pope Benedict XVI prior to the opening of the Holy Door of St. Peter's Basilica at the Vatican in 2015. Although retired Pope Benedict is growing more frail, there are no particular concerns or worries regarding his health, a Vatican spokesman said. (CNS photo/Maurizio Brambatti, EPA)

VATICAN CITY (CNS) — Although retired Pope Benedict XVI is growing more frail, there are no particular concerns or worries regarding his health, a Vatican spokesman said.

“In April, Pope Benedict XVI turns 89 years old. He is like a candle that is slowly, serenely fading, as it happens with many of us. He is calm, in peace with God, with himself and the world,” Archbishop Ganswein told the Italian magazine BenEssere.

“Contessa and Zorro, two cats that live in our gardens, come often to say hello to the pope emeritus,” he said.

After questions were raised regarding the aging pontiff’s health, Father Lombardi said his condition “does not raise any particular concerns.”

“Of course, it is part of the effects of old age and a gradual, growing fragility of the physical condition as with any elderly person,” he said. “(Pope Benedict’s) mind is perfectly lucid as we recently witnessed in his extraordinary interview with an Italian publication.”

In that interview, published in mid-March with Belgian Jesuit Father Jacques Servais, Pope Benedict reflected on the theme of mercy as a “sign of the times” that shows how, deep down, people still experience a need for God.

“Mercy is what moves us toward God, while justice makes us tremble in his sight,” he said.

PREVIOUS: Boston U. alum murdered in Congo was martyr of truth, says Assumptionist