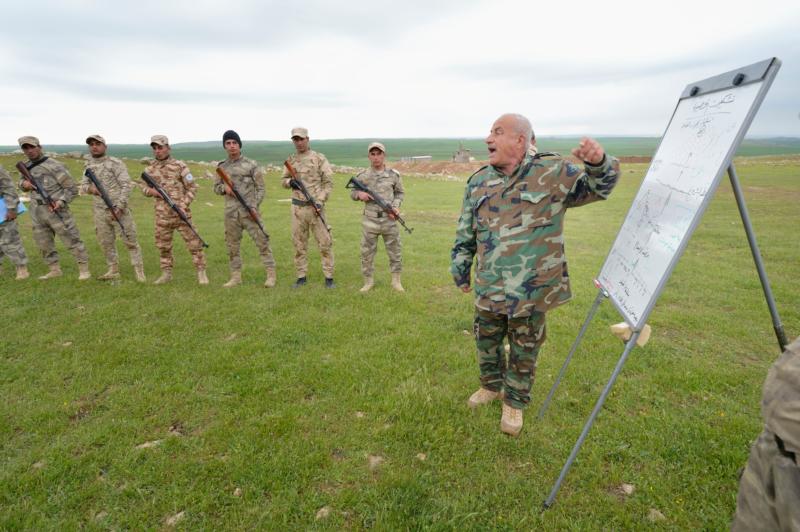 An officer lectures on strategy and tactics to members of the Nineveh Plain Protection Units during training April 12 at their base near Alqosh, Iraq. The Assyrian militia group was formed by Christians displaced by the Islamic State group in 2014. (CNS photo/Paul Jeffrey) 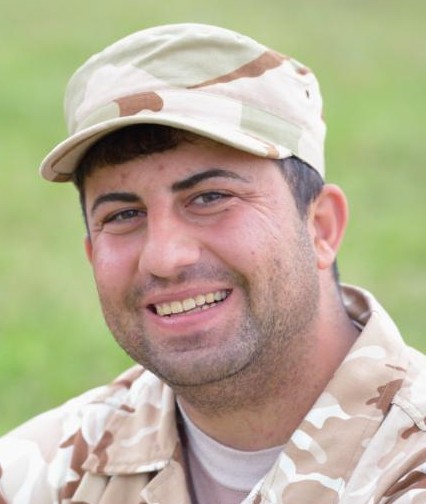 John Behnam, a member of the Nineveh Plain Protection Units, poses April 12 at the group’s base near Alqosh, Iraq. (CNS photo/Paul Jeffrey)

ALQOSH, Iraq (CNS) — A well-worn AK-47 in his hands, John Behnam ran up a hill overlooking the Ninevah Plain, which stretches in the distance toward the town he fled two years ago. As an instructor yelled at him to keep low, Behnam and other fighters practiced capturing an enemy position. Artillery echoed across the terrain, green with spring, as Kurdish Peshmerga forces traded artillery fire with the Islamic State group that holds Behnam’s hometown of Qaraqosh.

“Our ancestors lived there for thousands of years, so we have to go and retake our homes and lands and churches. We don’t want to live like exiles in someone else’s land. We want to go home,” said Behnam, a private in the Nineveh Plain Protection Units, or NPU, an Assyrian Christian militia formed by former residents of Qaraqosh and nearby villages.

The NPU, which numbers about 300 soldiers, was formed after the Islamic State rolled across the Ninevah Plain in 2014. Most of its members are inexperienced volunteers like Behnam, whose family lives in a sprawling displaced persons’ camp in Ankawa, near the Kurdish capital of Irbil. The men’s uniforms are a mix of hand-me-downs from other forces, and there are not enough guns to go around. Behnam said he has fired a total of nine bullets during several weeks of training. “But five of them hit the target,” he proudly told Catholic News Service.

The NPU grew out of the Christians’ desire to survive in a region of increasingly sectarian tensions. Sandwiched between Arabs to the south and Kurds to the north, Christians were pleased in 2014 when government ministers in Baghdad approved a plan to grant them semi-autonomous status similar to that enjoyed by the Kurds.

Yet they never got a chance to experience self-rule. Disarmed by the Kurds, who had promised to protect religious minorities from the Islamic State, the Christians watched nervously as the caliphate’s troops advanced. Despite reassurances that they would stay and fight, the Peshmerga suddenly pulled out in August 2014, forcing tens of thousands of Christians, Yezidis and others to run for their lives. Thousands who didn’t make it out were reportedly executed. Many women who remained behind were forced to become sexual slaves by Islamic State fighters.

The militia’s immediate mission is to drive out the Islamic State. Although the NPU has yet to see action, one of two other Assyrian Christian militias, the Nineveh Protection Forces, has engaged in combat with the Islamic State. And it has taken casualties.

When Cardinal Timothy M. Dolan of New York visited the region early in April, he stopped at the house of Rosa Majeed Nouri at her home in a camp for displaced Iraqis in Dawodiya. Nouri showed Cardinal Dolan and Bishop William Murphy of Rockville Centre, New York, a photograph of her son Fawaz, who was killed two months earlier while fighting with the Nineveh Protection Forces against Islamic State near Telskufu.

Despite their sense of betrayal, the Assyrian Christian militias cooperate with the Peshmerga.

“We have no choice. If you are outside the city and there is no water to drink, and you see some dirty water, you are obliged to drink it because it is the only water available,” Gen. Behnam Aboosh Abelmasseh, the NPU’s top official, told CNS.

Once the Islamic State is gone, however, the equation will change.

“This area has belonged to the Assyrians for many centuries. The Muslims are always pushing us, and our territory has been reduced to a few hundred square kilometers. If we don’t go with them to fight Daesh, then maybe other people will come to our territory and decide to stay,” said the general, a former officer in the Iraqi army during the regime of Saddam Hussein. “But we will only fight for our own area. I won’t help the Iraqi army or the Peshmerga elsewhere.”

The general said the group received some money for soldier salaries from the central government in February, but that arms sent to the NPU from Baghdad have been held up by the Peshmerga.

A U.S. group is trying to assure that the NPU gets help from a military assistance bill currently before the U.S. Congress.

“It’s imperative that the Christians and Yezidis have a security force composed of their own people, because they are never again going to trust the Peshmerga,” said Jeff Gardner, director of operations for the California-based Restore Nineveh Now Foundation. 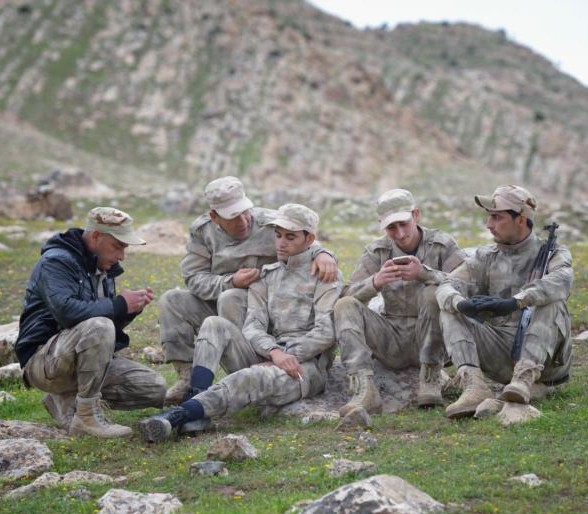 Members of the Nineveh Plain Protection Units take a break from training April 12 at their base near Alqosh, Iraq. (CNS photo/Paul Jeffrey)

Gardner said Christians and Yezidis must be allowed to return to their ancestral homes. “Otherwise, you’ll have the creation of a new class of global Gypsies. They’ll be rootless, landless, impoverished people forever,” he said.

A Catholic, Gardner says his group also provides some funds to families of men who volunteer for the NPU. Those families live in the camps set up by churches for the displaced.

“We have to relieve suffering, and corporate works of mercy are important. But the bigger picture is justice. If someone steals all you have, kidnaps your daughter and beheads your son, I have an obligation as a Catholic to do something. I can’t just say that sucks. That’s not Catholic. It isn’t even human,” Gardner said.

The commander of the NPU base at Alqosh, who asked not to be named, said relations between the militia and the church have been positive. He said Syriac Archbishop Yohanna Moshe of Mosul, who fled that city when it was overrun by the Islamic State in 2014, visited another NPU camp last year.

The base commander, who also served in the Iraqi military under Saddam Hussein, said he had retired to Qaraqosh and ran a small business until he was forced to flee.

“The first few months we lived the passion, just as Jesus did. The old and the young were sick, we were all sleeping in the open. The church spoke to the world, and the world responded with blankets and other supplies, eventually finding us places to live,” he said.

“But we are tired, and now just want to go home. We were the first Christians in the world, and if other countries want us to remain here, we need help. This was the land of my father and grandfather, and if we leave this region, our culture is finished,” he said.

“We are Christians, and we don’t want to fight and kill. What we learned about Jesus is love and peace. But with those people on our land, we just can’t sit back with our arms crossed. An Assyrian military, a Christian military, will help us save our land, and when the families go back home, they can live there in safety,” he said.

“My heart is bleeding to get back to my land. Along with my men, we want to get back to our villages, where we will fight. We are willing to be martyrs in front of our homes and churches.”

NEXT: Suspects arrested in alleged plot against Vatican, Israeli embassy