Catholic newcomers to Philadelphia raise their prayers — not only in English 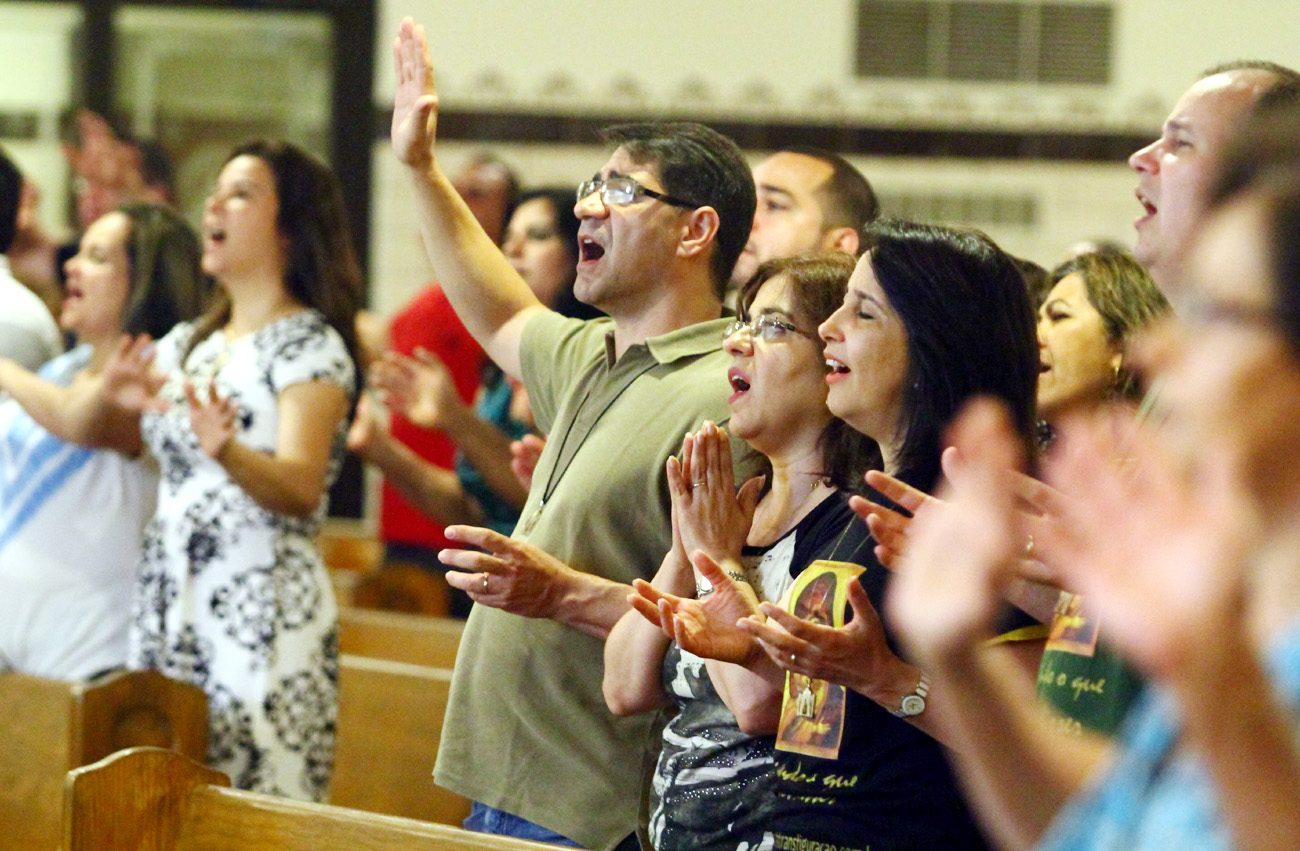 Members of the Brazilian Catholic community at St. Martin of Tours Parish in Northeast Philadelphia pray at the church during last Sunday's vigil Mass on Saturday evening, June 4. (Photo by Sarah Webb)

On any given weekend in the Archdiocese of Philadelphia, Mass is celebrated in 20 different languages, not counting English.

According to statistics provided by Thomas Denton, an analyst with the archdiocesan Office for Parish Services and Support, in the archdiocese 17,785 people attend Mass in a language other than English each Sunday.

In most of those Masses prayers are predominantly raised up in Spanish — which reflects a growing trend across the United States.

Of course, there have always been Masses for newcomers to America who did not speak English. This was usually done in the past through personal parishes of the various national groups.

The earliest Catholics in the Philadelphia area were mostly immigrants from either Ireland or Germany. Because the Irish were forced to learn English in their native land there was never a designated Irish parish.

The first personal parish in the diocese was Holy Trinity, which was established in 1788 for German Catholics in what is today known as Old City. It closed as a parish in 2009 and is now a worship site of Old St. Mary Parish.

Not too long ago the City of Philadelphia, not counting the suburbs, had nine Italian parishes, six Polish parishes and five German parishes as well as two Lithuanian parishes, a Slovak parish, a Chinese chapel and a Spanish chapel. All except Holy Redeemer Chinese Chapel and La Milagrosa Spanish Chapel served immigrants from Europe.

The passing of personal parishes

But times change. European immigration dried up and most of these parishes were absorbed into other parishes or became territorial parishes for anyone. Typically descendants of the immigrant founding families moved away and they attended territorial churches with Masses in English.

For this reason the archdiocese stopped creating personal parishes, with rare exception, but encouraged the territorial parishes to supply Masses in other languages as needed.

Two of those exceptions include St. Rocco, founded for Hispanic Catholics in Chester County in 2010, and Holy Angels, converted from a territorial to a Korean personal parish in 2006 in Northeast Philadelphia.

There were also four officially designated African American parishes established in an era when racial bigotry made African Americans unwelcome in many but not all territorial or personal parishes.

These African American parishes gradually closed in the wake of the civil rights movement when other parishes began to welcome all comers, although several territorial parishes with an African American majority have adopted a distinctive Black Catholic flavor in their worship services.

In addition, today eight archdiocesan parishes offer Mass in Vietnamese with a total attendance of 1,759.

“My impression is the large majority came after the war in Vietnam, but a smaller number have come since especially for family reunification,” said Matt Davis, the director of the archdiocesan Office for Pastoral Care of Migrants and Refugees.

The Korean community, in addition to Holy Angels Parish, has also purchased a former Lutheran church in Newtown Square. It is expected to be the future home for Korean Catholics now worshiping in Springfield, according to Davis.

“If it were not for immigration Philadelphia would be a dying city,” said Matt Davis, the director of the archdiocesan Office for Pastoral Care of Migrants and Refugees.

At this time, according to the statistics, there are no German Masses in the archdiocese, only one Italian Mass and three Polish Masses, and on a weekly basis one Lithuanian and one Slovak Mass.

The great phenomenon is the increase in Masses celebrated in Spanish in the archdiocese. Of the 17,785 Catholics in the archdiocese who attend Mass in another tongue, 12,097 attend a Spanish Mass in 32 parishes, only one of which, St. Rocco in Avondale, is officially designated as a Hispanic parish.

Current statistics show a slight decrease of 95 people attending Spanish language Masses this year and two fewer Spanish Masses, but this may be attributed to recent parish consolidation.

This figure may not reflect Spanish Masses added after the most recent October Count of 2015, and it contrasts to a decrease of 11 Masses and 5,381 worshippers at English language Masses.

Philadelphia itself has shown a modest population growth in the past decade after a long period of decline, and Davis believes this can be attributed in large part to immigration.

“If it were not for immigration Philadelphia would be a dying city,” he said.

This really is in keeping with what is going on in the rest of the country. According to a 2014 report, “Cultural Diversity in the Catholic Church in the United States” issued by CARA, a national non-profit research center located at Georgetown University, the American Catholic Church is changing dramatically and much more so in the West and the South.

It must be noted that the report’s appendix on Catholic population estimates relies on self-identified Catholics, not church-goers. The Archdiocese of Philadelphia’s October Count relies on a physical head count at weekend Masses each October for attendance figures.

Because CARA’s report is based on sampling and using 2010 population data, it is subject to error. With that said, it is food for thought.

According to the CARA report, in 2014 Los Angeles, the nation’s largest diocese, had 596,484 Non-Hispanic White Catholics, and 3,203,904 Hispanic/Latino Catholics, with smaller amounts of other ethnic groups as in all cases.

The Brownsville Diocese, very close to the Mexican border, had 13,148 Non-Hispanic White Catholics and 660,938 Hispanic/Latino Catholics.

In Philadelphia the CARA estimates were somewhat lower than archdiocesan reports show. The CARA figures were 811,715 Non-Hispanic White Catholics and 126,210 Hispanic/Latino Catholics and 89,722 in other categories.

Catholicism is indeed a universal church.

PREVIOUS: Sales of illegal guns, and the boys they kill, focus of city prayer service

NEXT: St. Charles Seminary seeks to move all operations off site