Big bump in seminary enrollment another sign of vigor for vocations 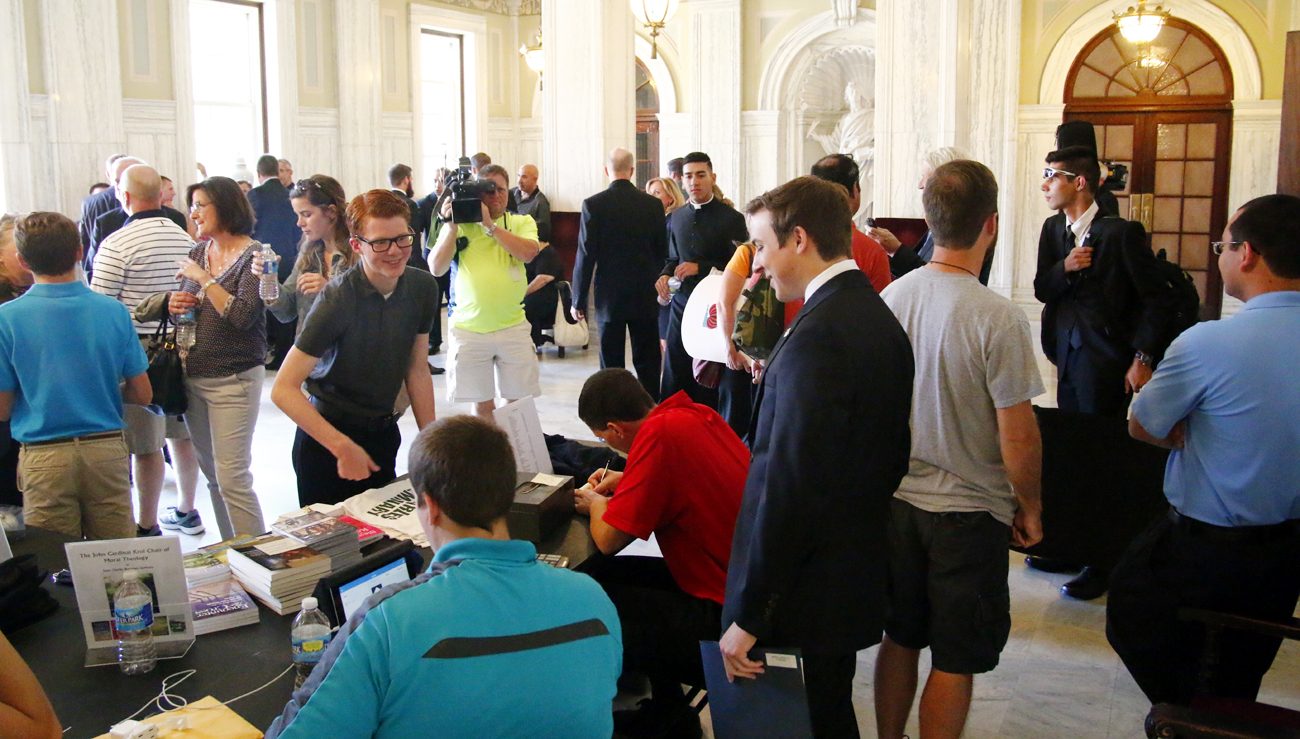 Joined by parents and their families, new seminarians moved in their gear and confirmed their arrival Aug. 23 with current seminarians manning a check-in table at St. Charles Borromeo Seminary. (Photo by Sarah Webb) 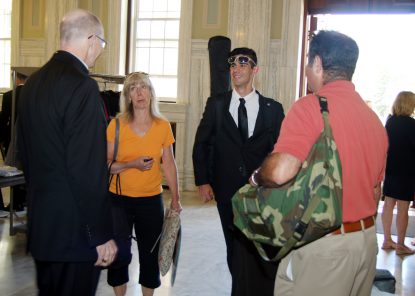 Bishop Timothy Senior welcomes new seminarian Ben Speranza from St. Robert Bellarmine Parish in Warminster, along with his parents Christa and Mike as they arrive at the seminary.

It’s a late summer ritual at every college and university in the country and that includes seminaries, such as St. Charles Borromeo Seminary in Wynnewood.

Late August means the return of students for the new academic year, but most especially new students either for their undergraduate college years or, in this case, some for graduate theological studies.

The first day at St. Charles this year was Tuesday, Aug. 23, and you could easily pick out the new men by their brand-new black suits and ties, as opposed to the cassocks worn by returning seminarians.

Other than that it was much the same as moving-in day at any college with proud parents and other family members along to help with the unpacking and to say goodbye.

This year St. Charles will be home to 160 seminarians — an increase of about 13 percent over last year — and 18 of the new arrivals will be studying for the Archdiocese of Philadelphia.

“We are blessed with another enrollment increase here with 45 new men,” said Bishop Timothy C. Senior, rector of St. Charles. “We are amazed by the action of God, by the grace of God for these young men to come here to discern their vocation to the priesthood. It is a miracle especially in this culture today that doesn’t support religious vocations as much as perhaps it once did.

“The young men are talented and could easily be pursuing other vocations, but God has worked in their lives and discerned in their hearts and they are coming here.”

One of the young men coming directly from high school was Robert Bollinger of St. Agnes Parish in Sellersville, but he won’t be among total strangers.

“It’s great, my older brother (Michael) is here too; he’s in Fourth College,” Robert said. “It’s been on my mind since beginning high school.”

Anthony Albanese, of St. Nicholas of Tolentine Parish in South Philadelphia, already has his undergraduate degree from Villanova and his master’s in education from the University of Pennsylvania behind him, and has been teaching Spanish for the past five years.

“I’ve been discerning for the past years,” he said, “going on retreats and other things. Now I feel this is the place I should be and I’m excited. We’ll see what happens.”

His parents, Tom and Debby Albanese, were equally proud, although Debby admitted, “It’s going to be a little hard to share him with others, but I’ll get used to it.”

One person all of the new arrivals studying for Philadelphia are already acquainted with is Father Stephen DeLacy, the director of the Vocation Office for the Diocesan Priesthood. He has seen them through their struggles with the idea of the priesthood and witnessed God’s grace as they make this act of faith by coming to St. Charles.

“We have a beautiful bond,” he said, “and we will still have a connection.”

The work of encouraging vocations is never-ending but does produce results. “We already have five men planning to enter next year. It’s a great start,” Father DeLacy said.

In addition to the men studying to become priests for Philadelphia, other seminarians represent 10 dioceses around the country and four religious congregations.

For example, Father Gregory Finn, of the Oblates of St. Joseph, was at the opening day with candidates of his congregation.

”We serve on the West Coast and here in the Diocese of Scranton,” he said. “I’ve brought two young men here, Jose Batista Castillo and Victor Espinoza.”

Seminary years are both a period of priestly formation and a period of continued discernment. It is almost a given that not every man who entered St. Charles on Aug. 23 will continue to ordination.

Some may decide that theirs is the lay vocation or perhaps they need more time to consider. Some who leave may reenter at a later date or enter another seminary.

Now he has chosen to come to St. Charles to study for the priesthood for Philadelphia.

“I think I have a calling to the priesthood and I can’t see myself anywhere but here,” he said. “I hope to enjoy every moment of my time here.”

Ben Speranza of St. Robert Bellarmine Parish, Warrington, is entering straight out of Archbishop Wood High School. The second of six in his family, his older brother is at De Sales University, according to his dad, Mike Speranza.

“We are very blessed Ben is following this path,” he said. “He has been wanting to be a priest since second grade.”

“I’m proud of him,” said Ben’s mother, Christa. “He has been the peacekeeper in our family and he is following that role. It is a long way, but we will see what happens.”

“I’m excited, I think it will be different, but I’ll be fine,” Ben assured his parents.

A long way is not just a metaphor for Pong Le. At 39, he came to America from Vietnam at age 16 with his parents Quyen Le and Anna Nguyen. A college graduate and a pharmacist, he is entering the post-college Spiritual Year program.

“My parents are happy for me, but nervous,” he said.

“I’m happy and I’m not surprised,” his father said.

Mike Lorello, a member of Sacred Heart Parish in Manoa, worked for a time while discerning and will now be in First College. He is the youngest of seven in his family.

As to his decision to enter, “I’m not surprised and I’m proud of him,” said his mother, Jeanmarie Lorello.

During their journey toward ultimate ordination, if that is God’s will, all of these young men will be guided along the way by St. Charles’ dedicated faculty.

Among those on hand to greet them this first day was Father Joseph Shenosky, the vice rector for the College Division and the director of admissions for St. Charles.

“It is inspiring to see them in this day and age,” Father Shenosky said.  “It’s a sacred responsibility for those of us who work with them to form them into being the kind of person the Lord intends them to be.”

This year’s class of 18 new men, either college or post-college for Philadelphia, follows last year’s 20 new men, both considerably larger than new classes in recent years.

Total seminary enrollment at 160 is up a whopping 33 percent from two years ago. At this point there are 67 men studying for Philadelphia including 30 in the College Division.

Perhaps it’s too soon to do a victory lap, but judging from the enrollment increases, if the trend continues particularly for those studying for Philadelphia, the pendulum may be swinging back with future ordinations approaching replacement level for those who have gone before. 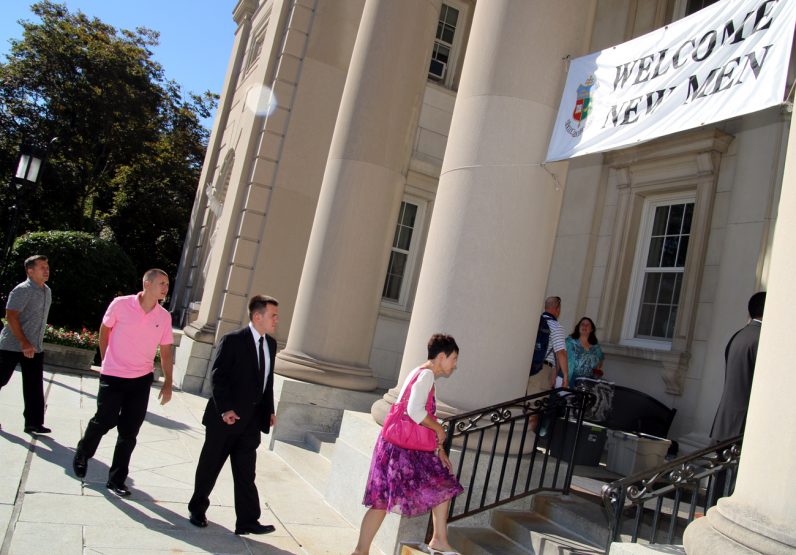 Nicholas Bruno from Holy Savior Parish in Norristown arrives at the seminary with his family.

NEXT: From the ‘living hell’ of youth, a young man’s future looks bright