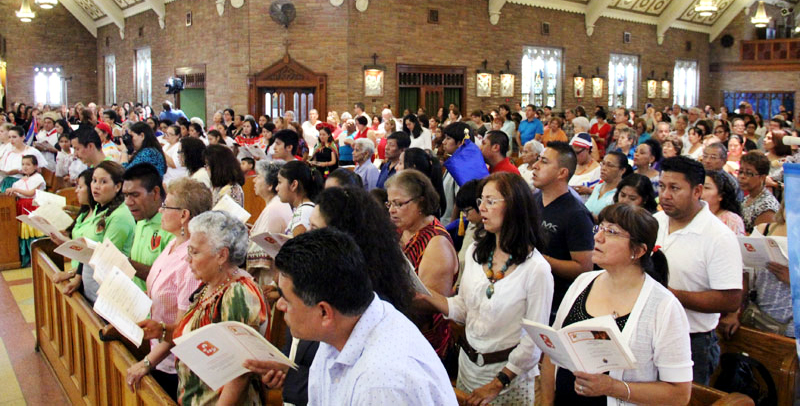 Three churches in Philadelphia, Chester and Montgomery counties that had been worship sites for parishes that consolidated in recent years will now officially close, the Archdiocese of Philadelphia announced Sunday afternoon, Aug. 21.

St. John of the Cross Church in Roslyn, St. Cecilia in Coatesville and Mater Dolorosa in Philadelphia’s Frankford section will close effective Sept. 16. Archbishop Charles Chaput has relegated the churches to the canonical designation “profane but not sordid” usage, and they will no longer be used for public worship.

While there is no indication the buildings are up for sale at this time, all three are properties of existing parishes. Per archdiocesan policy for parish mergers, all assets and debts of the consolidated parishes become the responsibility of the parish into which they merge.

The canonical designation clears the way for the pastors and parish leaders of those parish communities to consider selling the churches and related buildings in the interest of financial stability.

St. John of the Cross has been a worship site of nearby Queen of Peace Parish in Ardsley since the two parishes merged in Ardsley in 2014. The two churches are located 1.76 miles apart in eastern Montgomery County. Queen of Peace hosts 1,304 worshipers, on average, for weekend Masses.

As a worship site St. John’s may be used for Masses as needed, but few requests have been received to use the church as a worship site, according to the archdiocese.

At the time of the merger Queen of Peace incurred about half of its current $1.5 million in debt to the archdiocese, according to information from the archdiocese. For two years the parish has faced costs of $200,000 per year to maintain St. John Church and the buildings on its campus.

Queen of Peace, the archdiocese suggested, cannot pay off its debt while continuing to incur those maintenance costs without jeopardizing its parish ministries.

A similar situation exists among the other two affected parishes, but not in as precarious a way as Queen of Peace.

All are located a little more than one mile from Holy Innocents. Together the churches host 1,479 worshipers in the parish for Masses on an average weekend.

Even though Holy Innocents has $2.5 million in savings, it also is carrying $500,000 in debt to the archdiocese. The savings will be exhausted because they are being used to pay ordinary operating expenses, since parish revenues are falling short at this time.

Consolidation came to two parishes in Coatesville in 2012 as St. Cecilia merged with Our Lady of the Rosary. St. Cecilia became a worship site of the parish, located about a mile and a half from the parish church.

Our Lady of the Rosary, which shares the western Chester County borough with another recently consolidated parish, St. Joseph, also is experiencing a financial operating deficit of $18,000.

Even as ordinary expenses exceed revenues, the parish spends $46,400 annual to maintain St. Cecilia, on top of its deferred maintenance of up to $84,000.

Our Lady of the Rosary’s $150,000 in savings likely will not last long, having to maintain the St. Cecilia church that sees almost no usage. Its only recent usage came as the site of the funeral for a former pastor.

Our Lady of the Rosary hosts 853 worshipers for Masses on an average weekend, according to archdiocesan figures submitted by the parish.

NEXT: Big bump in seminary enrollment another sign of vigor for vocations