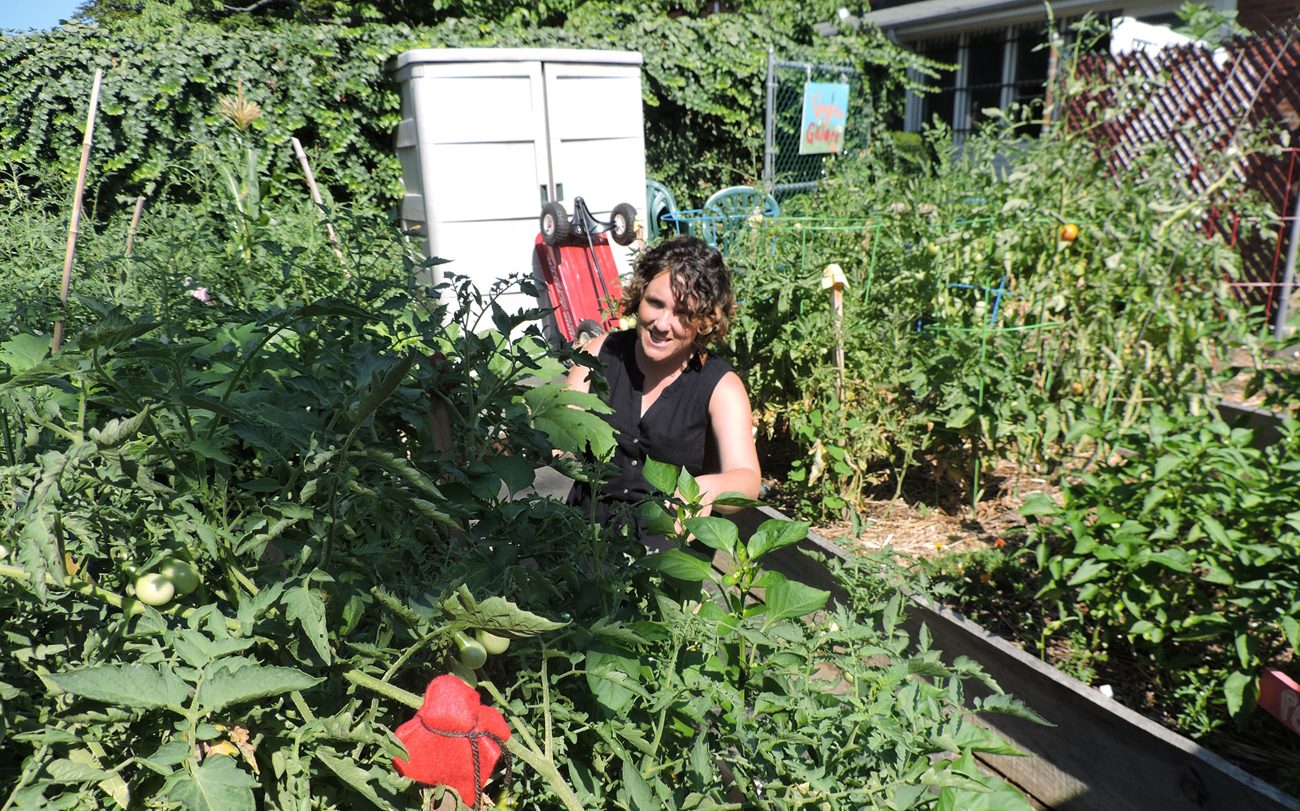 Bethany Welch, founding director of the Aquinas Center in a South Philadelphia neighborhood, stands in the middle of the center's garden July 27. The center is a collaboration of a Catholic parish and various social service organizations and educational institutions. (CNS photo/Elizabeth Eisenstadt Evans)

PHILADELPHIA (CNS) — Just a few miles from where Democratic convention delegates met July 25-28 at the Wells Fargo Center, a South Philadelphia neighborhood echoed with the sounds of multiple languages, presenting an array of cuisines and businesses that cater to a dizzying diversity of ethnicities and cultures.

Once a landing place for Italian and Irish immigrants, the area which houses the Aquinas Center, an innovative church- and community-supported venture in welcoming and supporting immigrants, is now home to Asian, African, Latin American and others families seeking a new life in America.

Founded in 2013 as a collaboration between the people of St. Thomas Aquinas Parish and various social service organizations and educational institutions, the center sits on the northeast corner of the church campus.

It is adorned with six community-created murals, the result of collaborative work that reflect the values and common vision of the groups who find a home at the center.

While the status of refugees and immigrants has become a topic of heated national conversation, the center is a place that welcomes residents regardless of their documentation or lack of it.

In a time of unprecedented fear about immigrants, said Bethany Welch, the Aquinas Center provides a way to know them “as human beings, not on the front page of the newspaper. They are real people who have dignity and deserve to have opportunity.”

In pursuing its mission is to “build unity in diversity, support learning and inspire thoughtful action,” the center offers English-language classes, counseling, legal help, advocacy for immigrants (whether documented or not) and a host of other programs.

Funded in part by a local grant from the U.S. bishops’ Catholic Campaign for Human Development, it has developed partnerships with local universities, including the University of Pennsylvania, La Salle, West Chester, Cabrini, Villanova and other universities.

Over the past three years, hundreds of students and adults have participated in center retreats, leadership development workshops, urban immersion experiences, volunteer opportunities and internships.

They were “really coming and being part of who we are in a culture of encounter. In order to build kinship, we have to be in the same place” she said in an interview with Catholic News Service.

A dynamo active both in the Philadelphia Archdiocese and in national church circles, Welch, a convert to Catholicism, received CCHD’s Cardinal Joseph Bernardin New Leadership Award.

Named for the late Cardinal Joseph Bernardin of Chicago, the award has been presented annually since 1988 to a Catholic between 18 and 40 years old who demonstrates leadership in fighting poverty and injustice through community-based solutions.

A garden where culture and leadership grow

Other center-sponsored activities include a community garden. The flourishing testament to different cultures has become not only a way of teaching children about nutrition, wellness and horticulture, but an urban refuge for parents, neighbors and visitors.

The array of “culturally relevant” vegetables not only witnesses to the vast number of potential culinary options open to families, but are also a way of encouraging them to grow their own vegetables at home, said Welch.

Currently the center is hosting a camp for grade-school-age children, focused on the arts; health and wellness, including time for yoga; work in the garden; and science fiction writing.

Eighth-grade students at the parish school across the parking lot, who began a social service project at the center, have now become the core of a group that has evolved into Youth Voices, an initiative that not only gives students the skills they need to be heard, but encourages them to take on greater leadership roles.

Though Welch is the only full-time staff person, the center also is staffed by interns and members of AmeriCorps, which is a federal service program, as well as part-time staff and volunteers, she said. “We are offering a really unique opportunity to experience community without some of the restrictions of a large nonprofit.”

On the cusp of moving to a new internship, Shirley Dessein, who is in a master’s program in social work at West Chester University, said it would be hard to leave the center.

“My work with teens was by far the most amazing experience” she told CNS. “I have learned so much about cultural competence as a social work student — that’s one of the things that’s going to make it tough to leave.”

She’ll also miss the relationships she developed with the teenagers with whom she has worked. “The things they think about are amazing,” she said, nothing their thirst for community service projects, their future college choices and how to help their families.

Diverse community in a gentrifying neighborhood

“What I learned the most from being here is the sense of community,” Dessein said. “All of my friends are also actively volunteers here, and with us seeing each other all the time, they have become a second family to me, along with the adult staffs.

“Aquinas Center is also known for its diversity. So, having friends and people from other cultures constantly around me helps me knowing the problems/challenges they are facing, and it educates me too.”

“Aquinas Center taught me to do what is good for my neighborhood and community. It makes me feel that I belong” said Andrea Rusli, a rising junior at SS. John Neumann and Maria Goretti Catholic High School.

Asked what most concerns her about the future for the neighborhood and the people the Aquinas Center serves, Welch didn’t hesitate.

“The challenge we are facing is gentrification. Neighborhood change and redevelopment is the biggest thing on my radar,” she said.

An influx of new residents drawn by the neighborhood’s easy access to center city has created pressure to raise rents and potentially price out small businesses, she explained.

Concerned, yes. Daunted? Not so anyone would notice.

“You don’t have to go to Germany and other places in Europe to encounter a refugee,” Welch said. “You can get a better sense of people’s lives and why they came (by encountering them here). Ultimately, we hope for a better America. We were created as a glorious experiment, but we’re not there yet.”

PREVIOUS: Learning of homelessness at the library — not by books, but by men

NEXT: Msgr. Lynn is freed from prison, retrial set for next year