Kits offer Louisianians a way to refurnish their flood-damaged homes 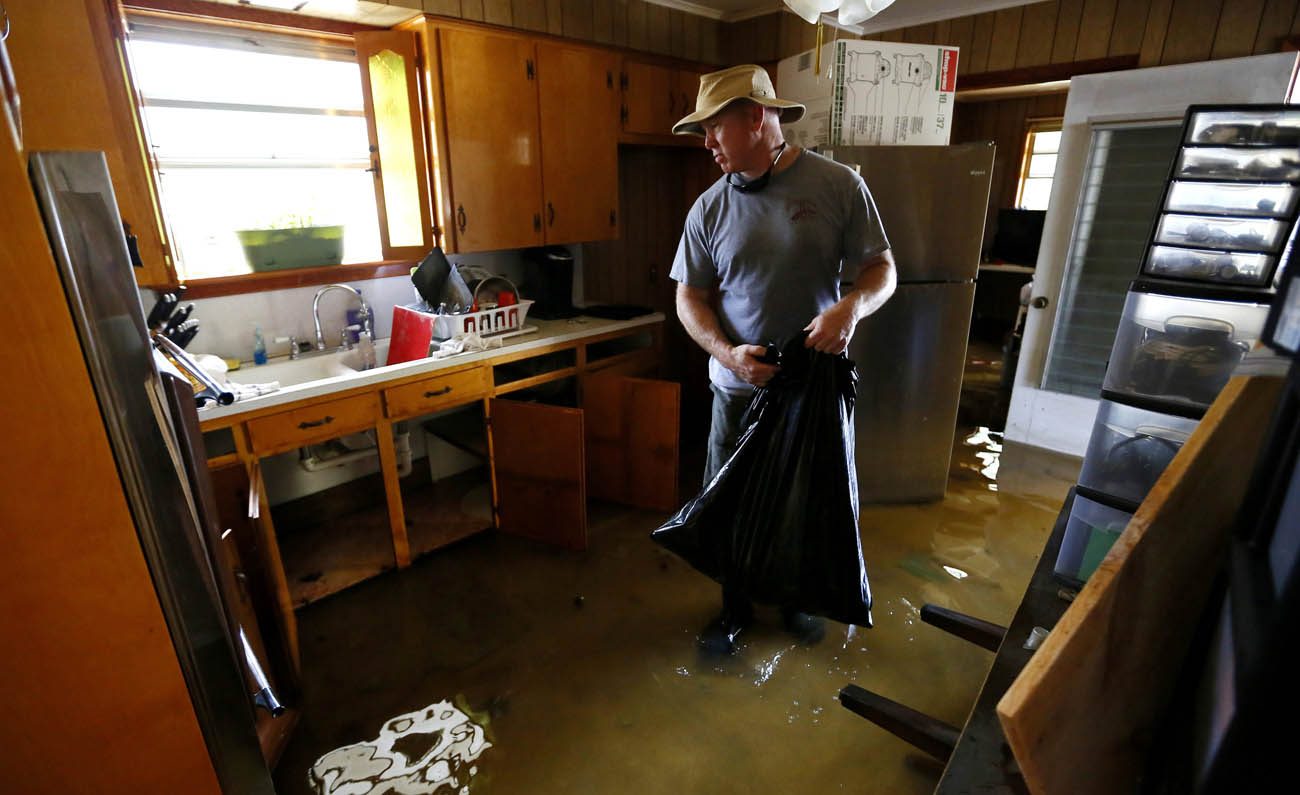 A man stands in his flooded kitchen in late August in Ascension Parish, La. A priest and deacon in the Diocese of Baton Rouge, La., have developed a Home Starter Kit program to help flood victims in Louisiana refurnish their houses. (CNS photo/Jonathan Bachman, Reuters)

BATON ROUGE, La. (CNS) — Furniture salesmen they are not, but the ingenuity and creativity of Father Jamin David and Deacon Ryan Hallford are allowing families in two areas of the Diocese of Baton Rouge to refurnish their flooded homes.

The deacon and the priest, who is pastor at St. Margaret Queen of Scotland Church in Albany and St. Thomas the Apostle Chapel in Springfield, are hoping to take their idea diocesan-wide as people across south Louisiana continue to recover from destruction wrought by August’s historic flooding.

They have developed the Home Starter Kit program, modeled in part after the Society of St. Vincent de Paul’s national House in the Box program, minus some of the extensive paperwork, according to Father David, pastor at St. Margaret. The Home Starter Kit, quite simply, offers families the opportunity to purchase pre-selected furniture either at cost, or if they meet financial requirements, at no cost.

Father David said the Home Starter Kit includes a “very nice couch,” dinette set and up to three beds per household, all from Olinde’s in Baton Rouge. The beds include either a twin or full mattress, box springs and the frames. If a family is at 150 percent of the 2015 federal poverty line, then the furniture, along with a bed in a bag, pillows and an 83-piece kitchen set, will be provided at no cost, paid for by donations that have been flowing into St. Margaret since the flooding began.

If a family is over the poverty threshold but still cash-strapped because of not having flood insurance, the furniture package can be purchased for about $1,100. Families that have flood insurance covering the contents of their home are not eligible.

The program is open to anyone, regardless of faith, living in the parish boundaries of St. Thomas and St. Margaret as well as registered parishioners who live outside of those parameters.

“We had some funding available (through flood relief donations) and we wanted to make sure we used that funding to help our parishioners in the best way possible,” Father David told The Catholic Commentator, newspaper of the Baton Rouge Diocese. “We wanted to make sure we could offer the program to anybody and everybody who wanted to take advantage of it, hence why we have the protocols.”

Father David said he and Deacon Hallford, who is serving his internship at St. Margaret and St. Thomas before being ordained in May, vet each application. He stressed neither the parish nor Olinde’s is turning a profit, and that Olinde’s is participating “as a service to the community.”

“It is a blessing from Olinde’s,” Father David said. “They are willing to do it as long as we want do it.”

Father David said about 10 families have filed applications that are in varying stages of recovery and five families have been granted final approval.

“This is to get us back on our feet so we can get to some form of normalcy,” said David Olinde, whose family has been active in the Catholic church for decades.

“Every time something like this has happened we’ve always gotten together, especially with the local nonprofit agencies,” he added. “We are local. We are not a national business that sends all of the money out of town.

“We try to keep everything as local as possible to give back to the people that support us. Father David said other parishes have expressed interest in the program and he and Deacon Hallford are willing to help pastors set it up at their parishes. Deacon Hallford said they are currently waiting to see how St. Vincent de Paul rolls out the Home Starter Kit model, which will determine how parishes will proceed.

“Parishes will be free to contact us and run it through us,” he emphasized, noting that the real push is still months away as people begin rebuilding their homes and their lives.

NEXT: U.S. Catholics urged to weigh issues carefully as they enter voting booth