In Ireland, doctors, church leaders tell the horrors of life in Syria 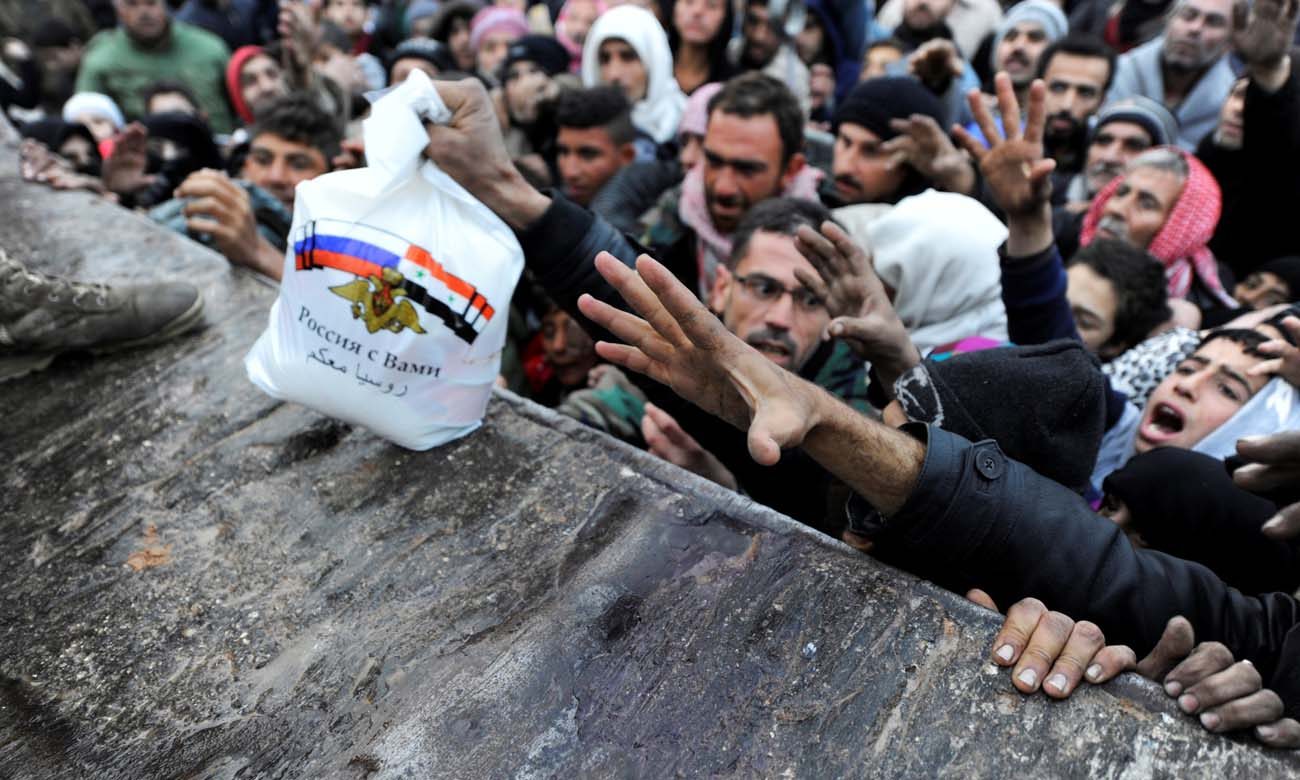 Syrians who have been evacuated from Aleppo reach out for Russian aid in Aleppo Nov. 30. (CNS photo/Omar Sanadiki, Reuters)

DUBLIN (CNS) — Fifty percent of Syria’s hospitals and medical centers have been destroyed or looted and their staff kidnapped, tortured or slaughtered, a leading Syrian surgeon told members of the Irish Parliament’s Foreign Affairs Committee.

Dr. Bashir Mohammad, a cardiologist, was part of a delegation of high-profile Syrian medical and religious leaders who appealed Dec. 1 for an end to punitive European Union sanctions against his country.

Khaddour, a professor of medicine at Damascus University, explained that the group had come to Ireland “to pass the message that Syria needs help.”

He highlighted how the sanctions had depleted Syria’s “capacity and capability in a very devastating way to manufacture medicines and to treat our patients.”

“The sanctions have killed more people than ISIS,” he said, referring to the Islamic State.

Prior to 2011, when the conflict in Syria erupted, hospitals had always been a safe place, but they became a “soft target,” and the country’s pharmaceutical industry was now no longer able to meet Syria’s medical needs, Mohammad explained.

He contrasted this to the situation five years ago when the country was able to meet up to 95 percent of its own medical needs and was exporting its products to more than 54 countries.

Syria is now “reliant on medication from the black market and, with the weak purchase power of our currency, we are unable to buy medication,” he said.

He told Catholic News Service: “We have lost half of our hospitals and three-quarters of our factories for medication — lift the sanctions please. We are friends to America and to the West.”

Patriarch Laham described the delegation as “ambassadors for peace.” He also asked, “as patriarch, that the bishops’ conferences of Europe gather together to raise their voice for peace.”

Speaking to CNS, the 83-year-old indicated his own personal exhaustion with the conflict. “It is war, war, war. Enough war!”

Referring to the 1,435 years in which Christians and Muslims co-existed together in Syria, Patriarch Laham stressed that faith is “part of the solution” to Syria’s war.

“Suffering has gone beyond all bounds,” Patriarch Ignatius said.

The Orthodox patriarch, who escaped a suicide bomb attack last June, spoke about the difficulty of trying to live life in such a dangerous context.

“I live in Old Damascus, not far from the street where St. Paul was led to be baptized. Occasionally we get bombs thrown on us by rebels who live about 2 kilometers away. There is no safe place left in Syria for anyone, and all Syrians need peace.

“We want a new Syria — for all Syrians — that respects diversity and gives a chance to every Syrian to serve Syria. I don’t think that having an opposition that is armed will help Syria; no country in the world would accept that, be it a moderate or unmoderate opposition. Obama and the U.S. government trained thousands of people and spent $500 million on the so-called moderate opposition, but they all joined Daesh (Islamic State) or al Nusra — except for maybe four or five groups.”

As to the situation of Christians in Syria, he confirmed that, along with other people of faith, Christians were being targeted because they were not willing to take sides.

“Our archbishops have been kidnapped and we don’t know anything about them; there are many priests who have been killed and many churches have been destroyed and Islamic scholars are also being killed. All people of faith are being targeted because Daesh and others act in the name of Islam, but they do not represent the real Islam,” he said.

Hassoun, the grand mufti, recalled how when the conflict erupted in 2011, he was told to leave but refused because he wanted to be a “bridge of peace between the opposition and the regime.”

His refusal to leave resulted in his son’s assassination outside his university. Later, his son’s remains were dug out of his grave by the rebels and have never been recovered.

“This is the revolution in Syria — if it were a revolution to reform the regime I would have been with them, but it is a revolution to kill men,” he said, urging legislators to go to Syria and see for themselves “what they have done to us.”

NEXT: Helping others realize their potential is good business, pope says