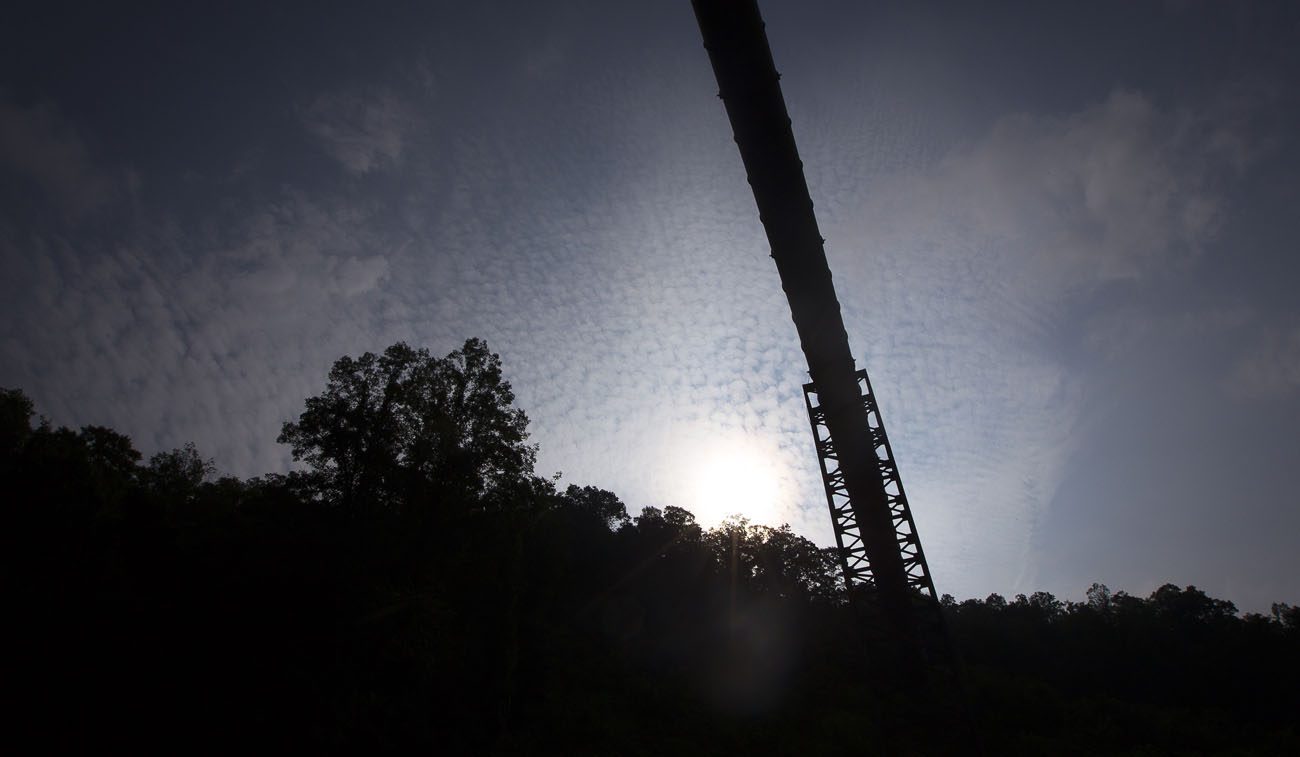 A coal conveyor runs across a highway near Whitesville, W.Va., in this 2014 file photo. Catholic groups were among dozens mobilizing to prevent any rollback of laws and international agreements protecting the environment in response to President-elect Donald Trump's campaign promises to undo directives that he believes hinder business development. (CNS photo/Tyler Orsburn)

WASHINGTON (CNS) — Catholic groups were among dozens mobilizing to prevent any rollback of laws and international agreements protecting the environment in response to President-elect Donald Trump’s campaign promises to undo directives that he believes hinder business development.

The groups, ranging from individual religious congregations to advocacy organizations, are stressing that the country has a moral responsibility to keep environmental protections in place and to strengthen them to protect the planet and people in poor and vulnerable communities already affected by climate change.

The call from the organizations goes beyond honoring the United States’ commitments to reduce carbon dioxide emissions under the 2015 Paris climate accord and urges people to contact elected officials about the importance of asking tough questions of Trump’s nominees for environment-related Cabinet posts and upholding the nation’s strong pollution standards that serve the common good.

Among the voices is the Catholic Climate Covenant. Dan Misleh, covenant executive director, told Catholic News Service that Catholic organizations are utilizing petitions, sign-on letters, op-ed columns and letters to the editor to add the Catholic voice to the conversation to “maintain and expand” efforts to reduce carbon dioxide pollution, increase energy conservation and boost the use of renewable energy.

As confirmation hearings opened Jan. 18 for Scott Pruitt, Trump’s nominee for administrator of the Environmental Protection Agency, the covenant asked its supporters to urge senators to dig into his stances on the role of the federal government in enforcing pollution laws and his ties to the fossil fuel industry. Pruitt has opposed numerous EPA regulations, filing a series of lawsuits as attorney general in Oklahoma against the agency he eventually could lead.

Misleh said that request led to 987 responses and more than 2,000 letters.

“Many of them have expressed skepticism about climate change and appear to be influenced more by the fossil fuel industry. Our hope is that with current business trends in the energy sector and the growing chorus of voices from the faith community and others, that the incoming administration will think twice before rolling back some of these programs,” Misleh said.

On Jan. 12, 32 faith-based organizations released a letter sent earlier to Trump that outlines policy recommendations for 10 key environmental and energy issues. The letter focused on the principles of stewardship, sustainability, justice and dialogue in urging the new administration “to support policies that will safeguard God’s creation, address the impacts of climate change on our most vulnerable brothers and sisters and fulfill our moral obligation to future generations” around the world.

Ten Catholic organizations signed on, including the Columban Center for Advocacy and Outreach; Jesuit Conference of Canada and the United States; Religious of the Sacred Heart of Mary, Western American Province; Maryknoll Office for Global Concerns; Leadership Conference of Women Religious; and Franciscan Action Network.

Rebecca Eastwood, advocacy associate with the Columban center in Washington, told CNS that the group’s concern is rooted in Trump’s stance on the environment.

“We really want to come off strong with that prophetic moral voice to say we have a responsibility, we have a call, to care about and work on these things and we are asking (Trump) to feel that same call and to move forward with these priorities,” she explained.

The letter’s request falls in line with Pope Francis’ call in his encyclical “Laudato Si'” about the necessity to protect God’s creation and to respond to the needs of poor people experiencing negative effects because of climate change,” explained Scott Wright, executive director of the Columban center.

“Behind all the 32 signatures are impacted communities,” Wright said.

Sister Patricia Chappell, executive director of Pax Christi USA and a member of the School Sisters of Notre Dame de Namur, told CNS the organization joined the letter because all people have a moral responsibility to protect God’s creation.

“The reason is we are inviting the president-elect to support policies that are obviously going to safeguard the land,” she said. “Certainly it’s going to protect our brothers and sisters that are most vulnerable. Also it’s our obligation to make sure we have a commitment to pass on to future generations, not only in the United States but in terms of the international global impact.”

The advocacy was set to continue beyond Trump’s Jan. 20 inauguration as the nation’s 45th president. Several of the organizations, including the Franciscan Action Network, planned events around the country during the first 100 hours of Trump’s presidency calling for strong support of environmental laws and regulations.

Faith-based organizations also are preparing to join the People’s Climate Movement, set for April 29 in Washington. Incorporating the diversity of the environmental movement, organizers expect hundreds of thousands of people will travel to the nation’s capital to push for ending dependence on fossil fuels, increasing investment in alternative energy and strengthening existing laws, such as the Clean Air Act and Clean Water Act.

PREVIOUS: Speakers: Aim for truth with love to help those with same-sex attraction

NEXT: ‘9 Days for Life’ campaign urges prayer, action to build culture of life