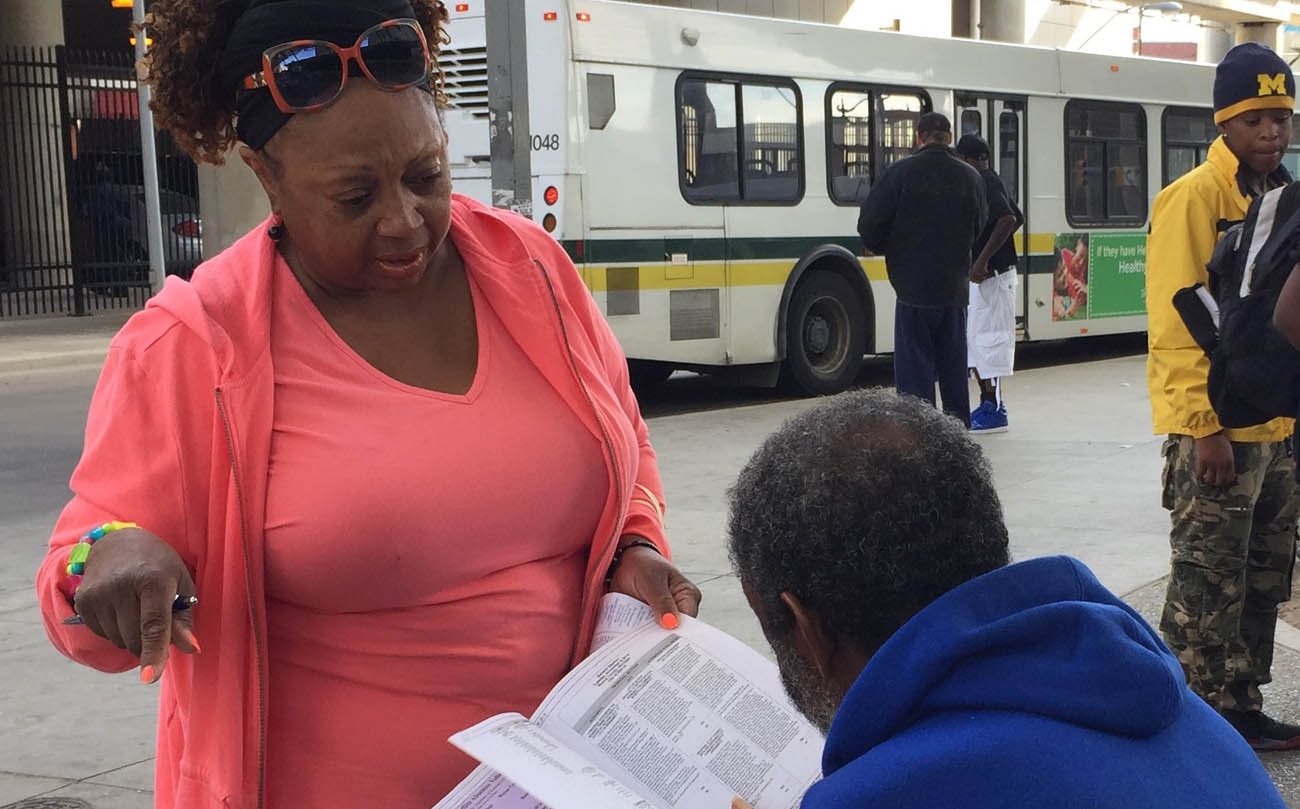 Pat Campbell-Williams, co-founder of MOSES, Metropolitan Organizing Strategy Enabling Strength, in Detroit, tells a person she met Oct. 19 at the city's Rosa Parks Transit Center about early voting for the 2016 election. She will be one of 600 people from grass-roots organizations planning to attend the U.S. regional World Meeting of Popular Movements Feb. 16-19 in Modesto, Calif. (CNS photo/courtesy Jacob Bolton, MOSES)

WASHINGTON (CNS) — For 27 years, Pat Campbell-Williams has worked on Detroit’s West Side, organizing her neighbors to tackle tough economic justice issues. It’s good work, she acknowledged, but she didn’t know if anyone cared beyond the city limits.

Campbell-Williams, 60, co-founder of MOSES — Metropolitan Organizing Strategy Enabling Strength, rooted in the city’s churches — had the chance to hear the pope in November at the Vatican when he addressed the most recent gathering of the World Meeting of Popular Movements.

Pope Francis applauded the work of several hundred people from more than 60 countries working in grass-roots organizations of the poor, the underemployed, indigenous communities and farmworkers. His words energized the longtime activist.

“It’s what I’ve been working for in all of my life, grass-roots organizing,” Campbell-Williams told Catholic News Service, “and to have the pope to be in the forefront of what we’re doing is just amazing. We’ve got a man of God that’s pushing things. The fact that he’s doing this got me excited.”

Campbell-Williams will be one of 600 people — whom the pope calls protagonists, meaning people facing everyday struggles — from throughout the United States attending a regional World Meeting of Popular Movements Feb. 16-19 in Modesto, California. The meeting is co-sponsored by the Vatican’s Dicastery for Promoting Integral Human Development; the Catholic Campaign for Human Development, the U.S. bishops’ domestic anti-poverty program; and PICO National Network, which engages in religious congregation-based community organizing.

The U.S. meeting is being planned at the request of Pope Francis. Cardinal Peter Turkson, dicastery prefect, will attend the meeting and address the delegates.

More than 20 U.S. bishops also are expected to attend and participate in plenary and small-group sessions over the four days, said Ralph McCloud, CCHD executive director.

Campbell-Williams said hearing from people of different faith traditions from around the world in November was inspiring and expects the same in California.

“I learned that we all are going through basically the same things around the world,” Campbell-Williams said. “We didn’t understand that until we told our stories and came together in solidarity to talk about it. That was amazing to just hear everybody tell their story in their language. It connected all of us to the same stories. We’re all basically dealing with the same issues.”

Dominican Sister Cheryl Liske, executive director of Gamaliel of Michigan, one of the organizations that will be represented at the meeting, said it is folks like Campbell-Williams whom the pope has in mind when he calls the church to move beyond charitable acts to accompany people on society’s margins.

“Church people in general, we get charity. We don’t get the Gospel message about justice. Our bishops, like the rest of us, are in that same mix. The important thing is that the bishops in Modesto, California, interact with the folks. They (grass-roots people) get the Gospel message right there on the ground, that this is about the widow and the orphan and the alien among us,” Sister Cheryl said.

Modesto, located in the fertile San Joaquin Valley, was chosen because of the economic and social challenges facing the region’s diverse population, meeting organizers said.

Bishop Blaire told CNS he wanted to learn from community representatives so the diocese could work more closely with similar local organizations.

“When you haven’t worked with community organizers, you have to do a little rethinking. A lot of people said movements in the church are supposed to be spiritual movements. I said to them, ‘There are many spiritual movements, like the folks living the real experience.’ We have to hear them and listen to them and accompany them,” the bishop said.

“I think it will be very important as the church that we listen because if we want to evangelize and bring the Gospel into the community, we have to hear what the community is saying,” he added. “We have to hear from the people themselves who are suffering. We can’t sit in our positions and think we can analyze all the poverty and suffering out there.”

Belinda Snead of Lexington, Kentucky, also is to be one of the grass-roots people attending the meeting. A leader in Building a United Interfaith Lexington Through Direct-Action, or BUILD, Snead told CNS there is no better way to learn about organizing successes and failures than by discussing her experiences with others.

“We all come from different parts of the country so everybody has a different dynamic that prevents them from getting something accomplished, from moving forward,” Snead said. “My goal is to go out and learn from others how they develop strategies on combating injustices.”

“First and foremost (the meeting) is to acknowledge the economic inequality that exists among the haves and have-nots” while examining the reasons people struggle because of unequal access to work, land and housing, he explained.

“(The meeting) acknowledges all of these things exist and to help bring people together who have been working on these, to understand there’s a connection between all of them and look at ways they might be able to work together,” McCloud told CNS.

Immigration and racism also are to be among topics explored, organizers said.