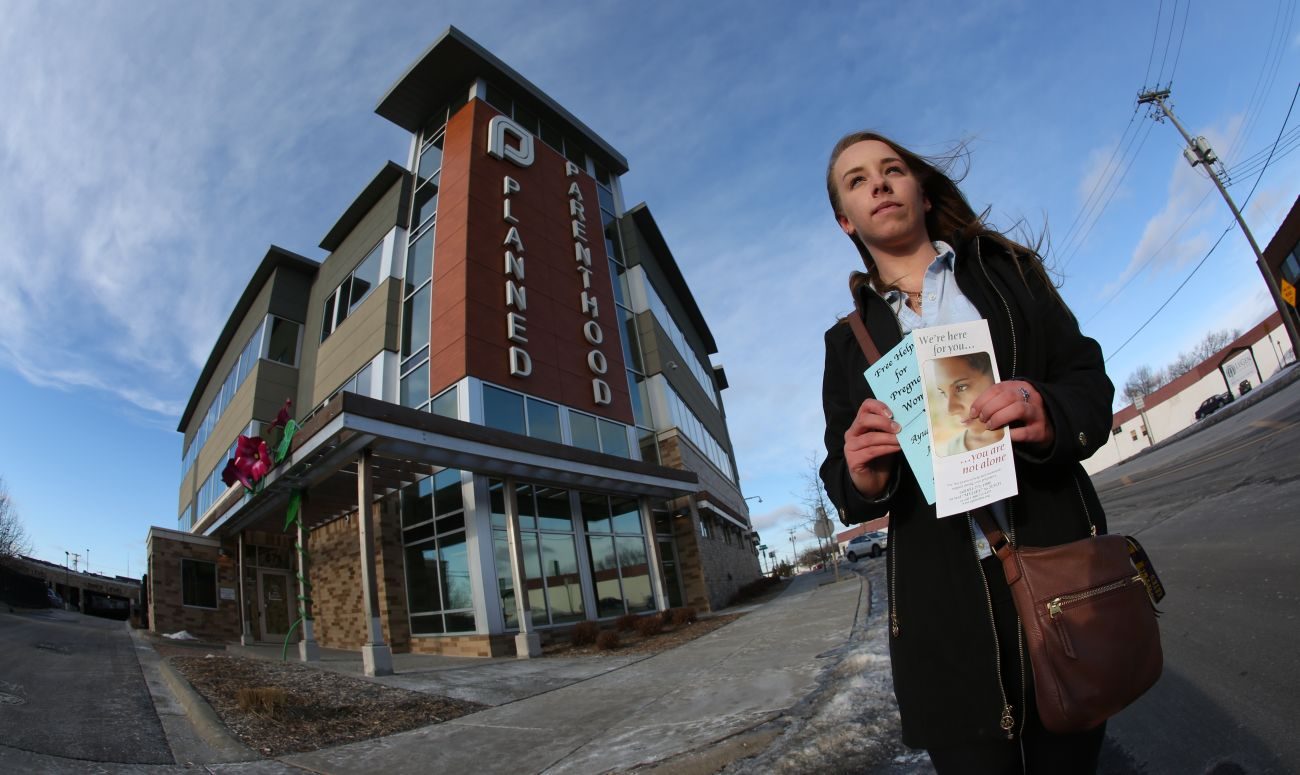 ST. PAUL, Minn. (CNS) — It didn’t take long for Nicky Peters to feel the drama of being a sidewalk counselor outside Planned Parenthood in St. Paul.

The 19-year-old sophomore at St. Catherine University in St. Paul and member of St. Ambrose Parish in Woodbury had decided last spring to take her pro-life passion to the streets. She signed up to volunteer with Pro-Life Action Ministries in St. Paul and paired with Ann Redding, the organization’s sidewalk counseling coordinator.

This past June, the two showed up hoping to encounter women with unwanted pregnancies. It was Peters’ first time.

“That day was amazing,” she told The Catholic Spirit, newspaper of the Archdiocese of St. Paul and Minneapolis. “I met Ann there, and within the first hour, a woman came up to us and told her (Ann) that she had changed her mind about having an abortion, but she had already had part of the procedure done.”

The woman told them that clinic workers had inserted laminaria sticks to help dilate her cervix to prepare for the abortion, but she had changed her mind. She jumped off the examination table and left the clinic without having them removed. When she encountered Redding and Peters on the sidewalk in front of the clinic, Redding hustled into action, leading the pregnant woman to nearby Abria Pregnancy Resources. Two months later, a healthy baby boy was born.

Peters, who is studying sign language interpreting at St. Kate’s, as her school’s known, will never forget that day. In fact, it’s what gives her the strength to spend hours alone on the sidewalk in front of Planned Parenthood, sometimes enduring insults and profanity hurled her way by vocal abortion supporters.

“It all goes back to that first day; the passion that I have is about helping these women,” said Peters, who does sidewalk counseling twice a month for about two-and-a-half hours each time. “My heart goes out to them, honestly. A child is such a wonderful thing that I’d do anything to help (the pregnant women).”

The seed of her current volunteer role was planted one year ago at the annual March for Life in Washington, marking the anniversary of the U.S. Supreme Court’s 1973 decision in Roe v. Wade, which legalized abortion in all 50 states. She made the trip out on a plane, but rode back on a bus chartered by the Archdiocese of St. Paul and Minneapolis when flights were canceled because of a powerful storm that dumped nearly 2 feet of snow in the mid-Atlantic region.

She rode back with other teens and young adults from the archdiocese, plus three women who belonged to Katies for Life on her campus.

“All these women were talking about how involved they were in the pro-life movement,” Peters recalled. “One girl in my college group who does a little bit of sidewalk counseling and is a prayer supporter described what it was, and it really sounded like something that I was called to do. I loved being pro-life and I really, really wanted to be more involved, so I looked into it, did some research and decided that this was for me and I wanted to do it.”

After going through a seminar and training, she went to Planned Parenthood with Redding, who has been in her role with Pro-Life Action Ministries since 2000.

“I’m just really glad she’s on board,” said Redding. “She’s out there to be compassionate with people. Whether it’s a ‘save’ or not, we’re recognizing the humanity of the child that’s (in danger of being) killed. Secondly, we are letting people know that we care about them.”

Redding noted that Peters is the perfect age for counseling because most of the women who come to Planned Parenthood for abortions are 20 to 24 years old. She estimates that 30 of the 200 regular sidewalk counselors who volunteer through the pro-life group are in that age group. Many are seminarians who come regularly on Friday afternoons.

“This is the best age group to be out there on the sidewalk,” Redding said. “The college-aged have physical strength, idealism and beauty. Young people have that beauty that draws someone to talk to them.”

However, the responses can be negative, even ugly, at times. Peters has discovered this, which initially surprised her.

“I do take a lot of heat, especially on the sidewalk, and even from people on campus,” she said. “I get profanity, the middle finger. I get anywhere from, ‘Oh, you’re just totally wrong,’ to large profanity statements.”

In between the encounters are long periods of silence, in which she sees no one and must figure out useful ways to spend her time.

Her go-to practice on those occasions is prayer. She recites decades of the rosary and calls on the intercession of the saints and Mary. Her words to God and to the people she meets are steeped in a deep faith that believes she is making a difference, and a faith that keeps her coming back for more, even when the coldest days of the year may lay ahead.

“I just love it, honestly,” she said. “It can get a little bit discouraging, but I always have to go back to that first day of helping that woman. I just have to go back to that day because I know that that truly was amazing, and I have to keep doing that so I can help more women. Even though people will give me the middle finger, I just have to sit there and pray for them and pray for a change of heart.”

Hrbacek is senior content specialist at The Catholic Spirit, newspaper of the Archdiocese of St. Paul and Minneapolis.