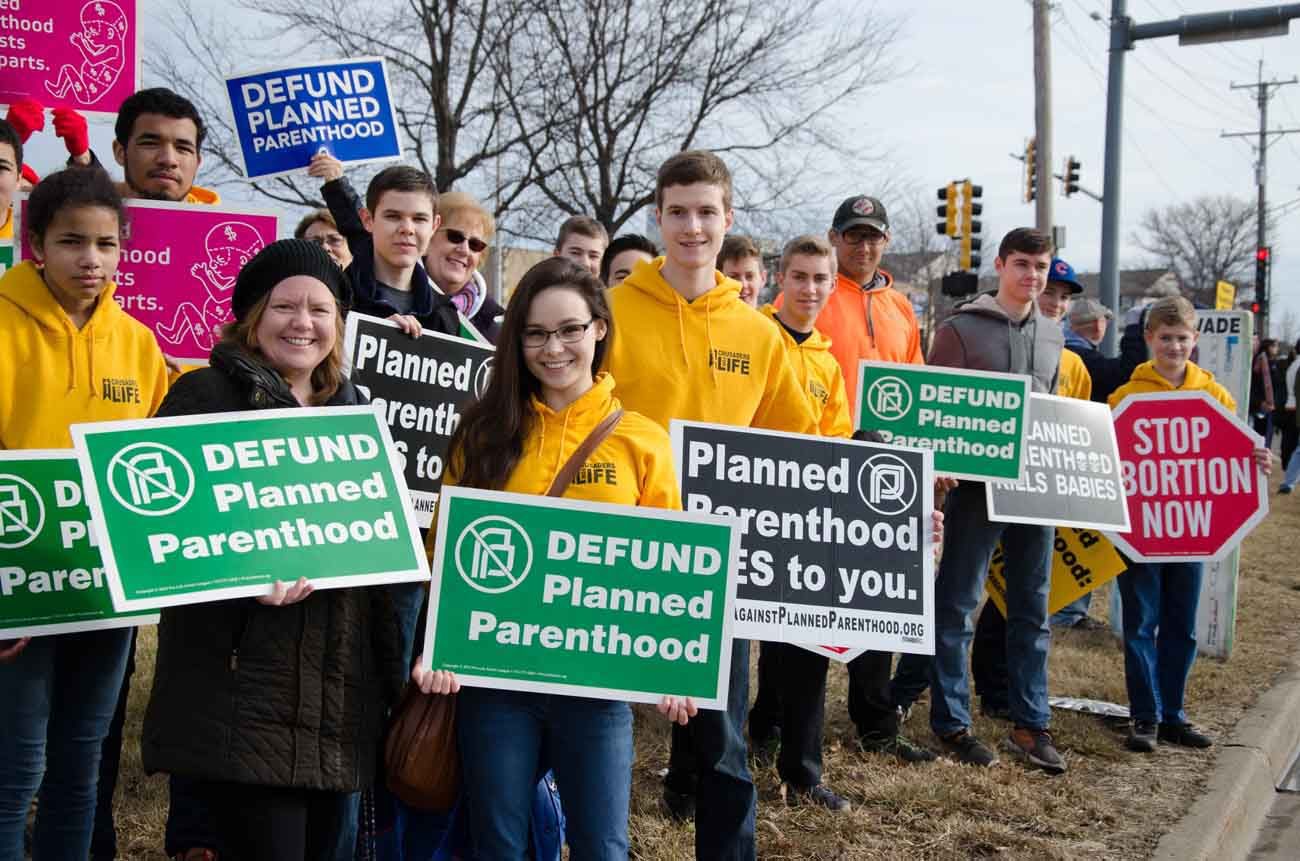 Members of the "Crusaders for Life" pro-life youth group rally Feb. 11 against Planned Parenthood in Aurora, Ill. It was one of many nationwide rallies calling on Congress to end federal funding of Planned Parenthood. (CNS photo/courtesy Sam Scheidler)

CHICAGO (CNS) — The organizers of rallies held across the country Feb. 11 to call for defunding Planned Parenthood said their message to Congress is to redirect taxpayers’ money to facilities that “do a better job meeting the real health care needs of women and families without specializing in abortion.”

More than 15,000 people attended 229 rallies held in 45 states. Average attendance was around 75, but in some cities, crowds numbered as high as 600, according to a new release issued after the rallies.

Eric Scheidler, executive director of the Pro-Life Action League in Chicago, was the national organizer of the rallies, or #ProtestPP. Other groups coordinating the events included Citizens for a Pro-Life Society, Created Equal, 40 Days for Life and the Susan B. Anthony List.

“This is a nationwide event, but at the same time, it is a local community concern,” Schiedler said in a statement. In rallying to tell “Congress to quit sending money to an organization that specializes in killing children,” participants also declared “that they do not want Planned Parenthood to continue operating in their neighborhoods.”

According to its 2014-15 annual report, Planned Parenthood receives $553.7 million annually in government health service grants and reimbursements, which is 43 percent of its overall revenue. Federal money is allocated to the organization through Medicaid and public family planning services. Planned Parenthood performs 34 percent of U.S. abortions.

“The defunding of Planned Parenthood is a matter of moral principle. Not a single cent of American tax dollars should go to an organization that kills innocent human life,” said Monica Migliorino Miller, director of Citizens for a Pro-Life Society.

During this year’s March for Life, held Jan. 27, Vice President Mike Pence told the crowd that the Trump administration would work with Congress to stop taxpayer funding of abortion “and devote those resources to health care services for women across America.”

On Jan. 24, the House passed the No Taxpayer Funding for Abortion Act, making the 41-year-old Hyde Amendment permanent. The amendment, which has had to be approved each year as part of the budget for the U.S. Department of Health and Human Services, prohibits tax dollars from paying for abortion except in cases of rape, incest or threat to the woman’s life. The Senate has yet to act on a companion bill, but President Donald Trump has said he will sign it into law when the measure reaches his desk.

On Jan. 23, Trump took executive action to reinstate what’s called the Mexico City Policy, which bans tax dollars from funding groups that promote or perform abortion in other countries.

“Americans want to end taxpayer funding of abortion — that includes stopping taxpayer funding for the nation’s largest abortion provider, Planned Parenthood, and ensuring any Obamacare replacement is pro-life, and does not allow tax dollars or tax credits to pay for health care plans that include abortion,” said Marjorie Dannenfelser, president of the Susan B. Anthony List.

“Planned Parenthood is a profit-driven, abortion-centered business that has performed more than 300,000 abortions in the last three years for which data are available.,” she said in a statement. “They do not need or deserve taxpayer dollars, and redirecting their federal funding to rural and community health centers would be a victory for women’s health.”

NEXT: For African-Americans, new history museum ‘tells our story’