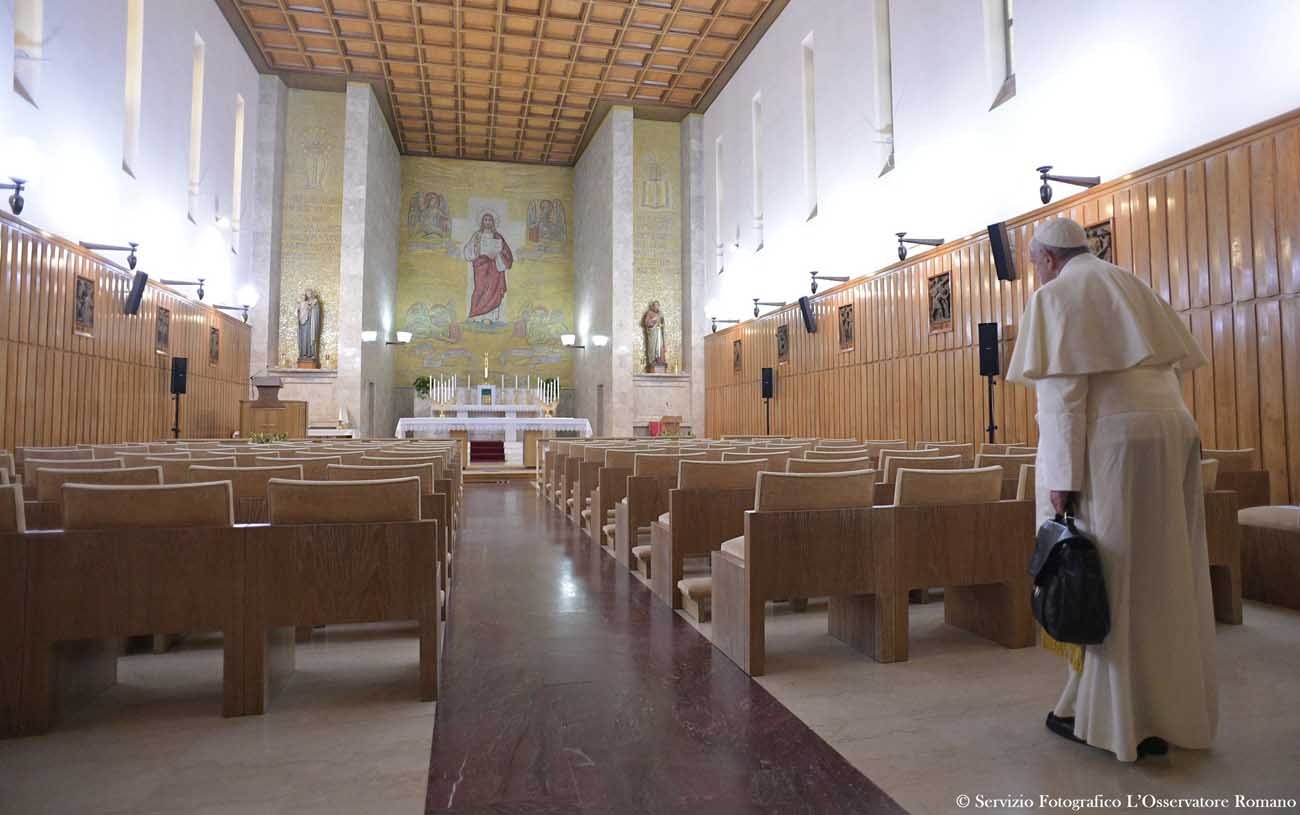 Pope Francis attends the first day of his Lenten retreat at the Pauline Fathers' retreat center in Ariccia, 20 miles southeast of Rome, March 5. The pope and top members of the Roman Curia are on retreat from March 5-10. (CNS photo/L'Osservatore Romano)

WASHINGTON (CNS) — Prayer, one of the three pillars of Lenten discipline, along with fasting and almsgiving, seems to get the biggest boost during Lent.

Spiritual leaders note that Catholics are most likely praying already and that Lent is a time to make this act even more intentional — to pray more or in a more focused way.

No matter how Catholics choose to up their prayer during Lent’s 40 days, they have opportunities to do so at their own parishes since many of them are offering Stations of the Cross, eucharistic adoration, added times for confession and maybe even retreats.

Those who can’t make it to anything extra at church can tap into tools for prayer right on their computers or smartphones with everything from virtual Stations of the Cross to apps that track spiritual activities or offer help on preparing for confession, praying the rosary or reading the Bible. Plenty of online retreats also are available including ones specifically geared for Lent.

Father John Riccardo, pastor of Our Lady of Good Counsel Parish in Plymouth, Michigan, said Lenten prayers can be divided into two different areas of focus. The first few weeks, he advises people to pray about areas that need to change, but during the second half of Lent, he said, prayers should focus more on trying to understand Jesus’ actions and how Christians are called to respond to them.

If the promptings for more prayer and the abundance of tools or events to guide people in prayer are overwhelming, Catholics also can turn to an approach advised by some spiritual leaders: finding quiet time.

Chicago Cardinal Blase J. Cupich, said that in today’s busy and often noisy world it’s hard to find quiet, but he urged Catholics in his archdiocese to try it.

“Lent is the season of silence. It is a time to enter into the desert, as Jesus did for 40 days,” he said in his Lenten message posted Feb. 26 on the website of the Chicago Catholic, the archdiocesan newspaper.

“Admittedly, silence can make us feel uneasy,” he wrote. “Perhaps it is because silence forces us to think, to feel, to be in touch with those deep areas of our lives where a sense of emptiness or meaninglessness may be lurking in our hearts.”

The cardinal said the Gospels often portray Jesus going off alone in silence to pray, which not only says something about him but indicates something his followers should consider.

Along this line, Cardinal Cupich said he has asked pastors in the Chicago Archdiocese during Lent to allow for extra time for silence during Mass, especially after Communion. “We need this silent time to allow God to speak to us. That means quieting ourselves even from saying prayers and just being aware of what Jesus tells us: we abide in God and God in us.”

Jesuit Father Adolfo Nicolas, the former superior general of the Society of Jesus, gave similar advice in a video interview with The Jesuit Post in which he said, “We need to develop a taste for silence … where we can hear the Spirit.”

He said the act of being silent as a form of prayer is not accomplished in a short time and there is “no formula or magic word” to make it work. He also stressed that finding times for quiet reflection doesn’t require a house with a garden and a chapel. Instead, he said, people should recognize that they carry the chapel within themselves all the time.

“In the midst of the noise,” he said, “we can create a spirit of silence.”