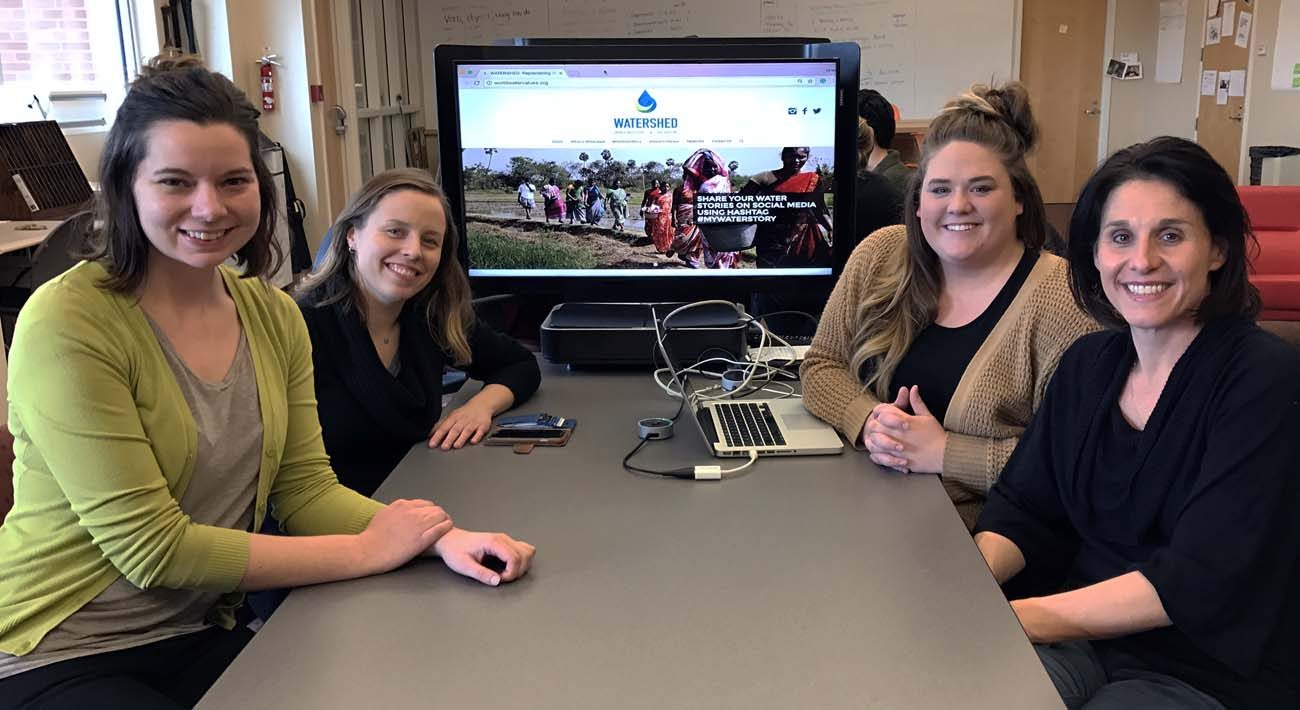 MUNCIE, Ind. (CNS) — When four graduate students at Ball State University took on an awareness campaign, they hoped it would have a global reach. Then, a global institution reached back.

“I honestly couldn’t believe it. Not because I didn’t believe we had the ability to do a successful project,” said Aiste Manfredini, who handles social media for the group. “I guess we just didn’t expect any major iconic hub to want to take on a campaign like this.”

That “major iconic hub” was the Vatican. The four students, all of whom are earning master’s degrees in emerging media design and development, along with their professor and another Ball State staff member, assisted traveled to Rome to assist with a March 21-23 conference in Rome sponsored by the Pontifical Council for Culture and the Club of Rome.

“It was probably the most rewarding and surreal experience of my professional career,” Jennifer Palilonis, the team’s adviser, told The Criterion, newspaper of the Archdiocese of Indianapolis. “It was incredible to be a part of such an amazing group of people from all over the world addressing all kinds of issues related to water.”

“Day two of the conference was streamed on Facebook Live and at one point we reached 30,000 views,” said Briee Eikenberry, the project’s producer, referring to the number of people who were watching the event live through the social media platform.

“I had many people come up to me and say, ‘We could not have done this without your students,'” Palilonis said. “I have never been prouder of a group of students that I’ve worked with in my 16 years of teaching.”

When the young women originally began their water-awareness campaign, christened the Blue Roots Project — bluerootsproject.org — no one expected it would take them to the Vatican.

It started as a collaboration to help Circle of Blue, a research and communications hub that focuses on water-related problems and advances. However, as the Ball State project gained momentum, Circle of Blue suggested that the students should be part of Rome’s “Watershed” conference.

After the Vatican learned of the students’ work, which included a website and global social media outreach, the four were asked to create the official website for the Watershed event and to assist with social media for the event itself.

On March 22, World Water Day, Pope Francis spoke on the issue and thanked the “Watershed” conference participants for “raising consciousness about the need to protect water as a treasure belonging to everyone.”

“When the Vatican talks about issues like this, people listen, and it’s not just the Catholic audience,” said Palilonis, a member of St. Mary Parish in Muncie, in the Diocese of Lafayette. “You don’t have to be Catholic to sort of perk up and listen when the pope and the Vatican start talking about what’s important in the world.”

The Ball State team wants to continue spreading water consciousness to leaders and the public alike, engaging everyone in a conversation about water that they began with the Blue Roots Project and bolstered through the “Watershed” conference.

The core of the Blue Roots Project is the social media hashtag #MyWaterStory. The students ask groups and individuals to share their own experiences with water on social media and mark those with the hashtag. The team then gathers and shares the stories, hoping that participants from more privileged societies will see the difficulties that others have with regard to water.

“Many of us wake up in the morning, we get ourselves a glass of water out of the tap, we take a long hot shower,” said Palilonis, “and there are other parts of the world where women spend their entire day walking back and forth to water sources so that their children and their families can have water.”

The team also hopes to reverse the disregard they say many of their fellow Americans have for the value of water.

Jessica Pettengill, the project’s research strategist and media producer, recalled the severe drought that gripped her home state of California three years ago.

“It was insane to me that even though we were going through this drought and the governor had declared a state of emergency, people were still watering their lawns twice a week,” she said.

Another team member, Sarah Janssen, is trying to bring home the importance of water by highlighting a crisis that happened just a state away. She designed a personal project to collect and share the stories of the residents of Flint, Michigan, who were afflicted by lead-contaminated water last year. Ailments caused by this poisoning will affect some local residents for the rest of their lives.

“I think sometimes people are overwhelmed by the amount of suffering and what to do and how to help. So they don’t always seek out those outlets or find out how to help,” said Janssen in a telephone interview with The Criterion from Flint. “Being here as an outsider, people have said to me, ‘It’s good to know people still care’ or, ‘It’s nice to talk to someone who cares.'”

Janssen believes that just sympathizing with those who are suffering is a step on the road to a better world. She hopes that the campaign will generate a flood of support for Flint and for all areas suffering similar crises.

Breidenbach writes for The Criterion, newspaper of the Archdiocese of Indianapolis.

NEXT: Vatican official praises Detroit Archdiocese for response to immigrants