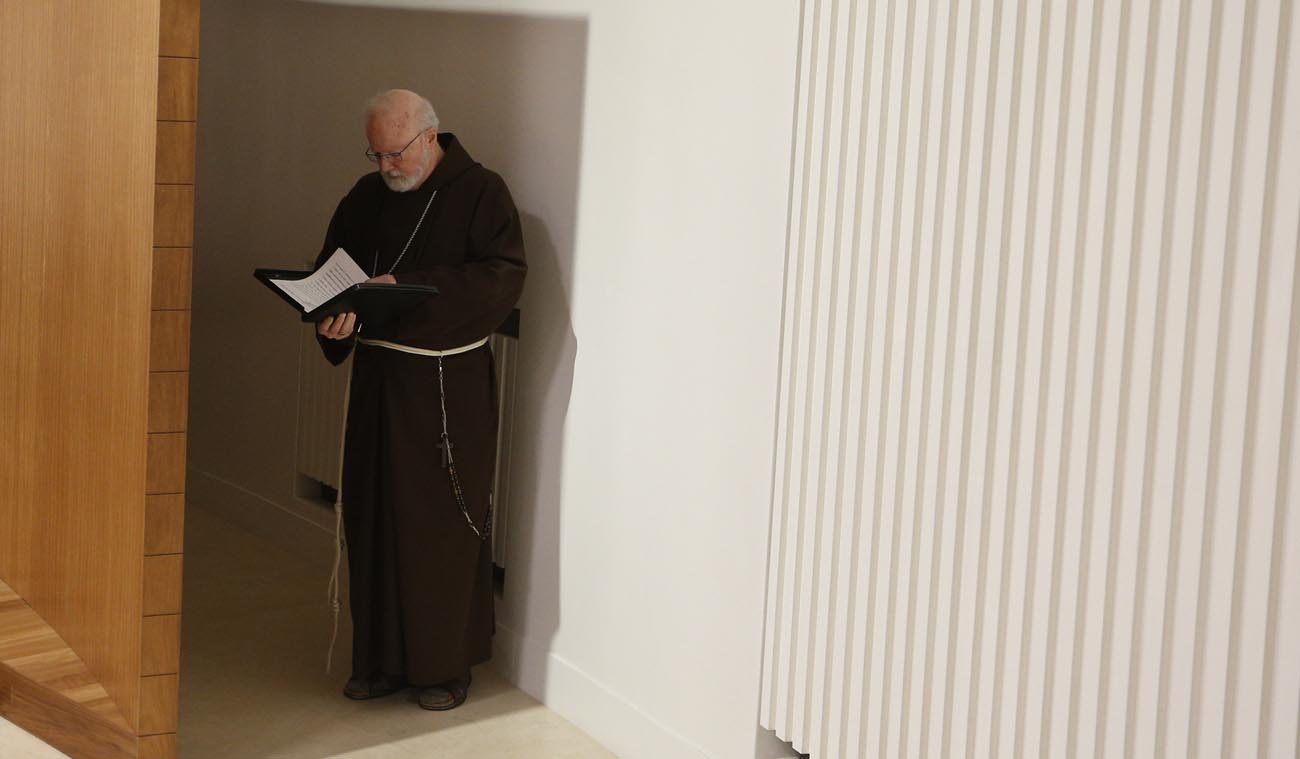 Cardinal Sean P. O'Malley of Boston, president of the Pontifical Commission for the Protection of Minors, reviews documents before entering a seminar on safeguarding children at the Pontifical Gregorian University in Rome March 23. (CNS photo/Paul Haring)

Never letting a letter or email languish unanswered was such a key “best practice” of showing care and concern for victims of sexual abuse by clergy and religious that Marie Collins, an Irish survivor, stepped down from the Pontifical Commission for the Protection of Minors over the issue.

When it comes to whether an office should respond to a victim, “There’s an amazing ability to take whatever is simple” and make it sound “as if it’s highly complex,” said Declan Murphy, who was abused as an adolescent by two Christian Brothers in Dublin in the 1960s. Murphy, who was in South Korea, spoke to Catholic News Service via Skype in mid-March.

It’s a “basic courtesy” to respond, even if it is just a brief acknowledgment of receiving the letter with a general time frame of intended follow-up. “That’s the way most people work when they value and respect a person,” he said.

However, “if your starting point is not wanting to do it, you will drag in lots of reasons” to justify why writing back cannot or should not be done, he said.

After 38 years of keeping his abuse hidden from everyone and “coping on my own,” Murphy said he was back to relying on his own resilience, with the support of family, to make sure his voice was heard with repeated calls and arranging meetings with church leaders after he came forward in 2006.

The most hurtful response he got, he said, was telling a high-level church representative about being raped for three years by two religious priests and “he looked at me in the eye and said, ‘I can’t help you,'” in “a cold and callous” way.

That kind of dismissal only made sense, Murphy said, for someone who looks at the issue from a legal or organizational point of view, in which different people are responsible for their own separate jurisdictions — and the problem gets volleyed back and forth over ecclesial lines.

In every situation, he said, the thing that hurt most “was the fundamental lack of respect for me as a human being whose childhood was taken away.”

“No one can go back and fix what happened to me,” Murphy said, and “I try to remain fair, articulate and balanced. But what I’ve seen is horrendous” when it comes to how people have responded to his coming forward.

Murphy said he had three objectives in all of his efforts to reach out to the church: “Somebody to listen to my story; I wanted them to believe me and say ‘I’m sorry’; and I wanted my costs back,” meaning medical and legal costs incurred since 2006, the year his health broke down and he revealed the past abuse.

The best responses he received, he said, were when someone said he was going to do something and then actually did it. Another time, the same person “sent a Christmas card. It was a small gesture, but it showed a human side.”

Church leaders and personnel should not be driven by legal concerns, fears of litigation or self-interest, he said, but by a pastoral compassion that asks, “What can we do to help you? Tell us what you need.”

Helen McGonigle, a lawyer living in western Connecticut, told CNS in a series of emails that she faced so many “obstructionist tactics at the local level in the secular legal system, what choice do we have but to turn to the Vatican, canon law and natural law,” since the sexual violence against children is a crime against nature.

McGonigle and her sister, who later died from a prescription drug overdose in 2005, were victims of late-Norbertine Father Brendan Smyth when he was assigned to Rhode Island.

He was ordained and assigned to ministry in Northern Ireland, Ireland, Rhode Island, North Dakota and other places, despite the knowledge and complaints by other religious that he had molested children, as found in an independent Northern Ireland Historical Institutional Abuse Inquiry. He died in prison one month after starting his sentence for 117 counts of children molestation in Ireland and Northern Ireland over four decades.

Because Father Smyth was a member a religious order, based out of an abbey in Ireland and was sent to multiple dioceses, McGonigle wrote to numerous jurisdictional bodies in her efforts to gain information and help.

“I tried the local route in every imaginable way and felt the need to circumvent” the appropriate channels after letters went unanswered and questions and requests went unaddressed. Her civil suit was dismissed because of the statute of limitations.

However, when recipient offices at the Vatican denied having “competence” in the matter and redirected her to other authorities, McGonigle said she felt “that an internal strategy of leaving survivors twisting in the wind seems to have been adopted by the Vatican.”

There is no way to know how many survivors are ever able to bring themselves to write or even bother, she said, which is why “those who do choose to write should be acknowledged in some way and provided some measure of assurance that their concerns are being listened to. After having been raped and our rights trampled upon, it is the very least these people could do. Are they beyond compassion?”

The most helpful responses, she said, came from a priest in North Dakota who confirmed facts “in an open and candid way.” In fact, she said when news broke in 1994 of Father Smyth’s crimes, the Diocese of Fargo “went door to door in their outreach campaign.”

McGonigle said she wrote to church leaders, not to be “listened to,” but to do “the right thing. I did feel it was right to make an attempt to do my part in exposing Smyth’s crimes and requesting honesty and transparency” in her right to know the truth.

The very heart of the correspondence, however, is not just about eliciting a reply letter, she said: “What survivors want to see is action, child protection, perpetrators prosecuted and removed.”

“Action goes a lot farther than any one letter,” McGonigle said.

NEXT: Mexican archdiocese: Companies that work on border wall are ‘traitors’