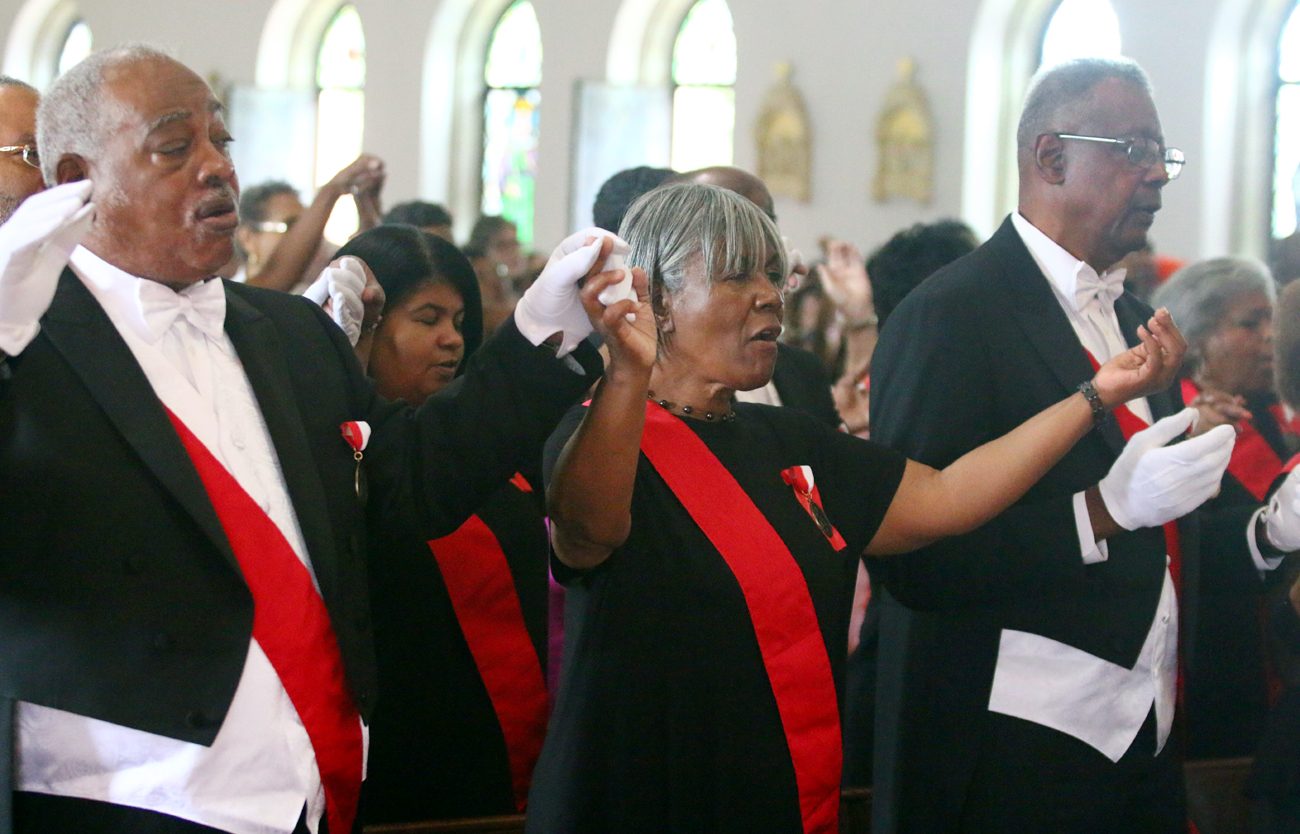 Tolton ambassadors pray the Lord's Prayer with the congregation during Mass on Sunday, Aug. 6 at St. Raymond Church in the Mount Airy section of Philadelphia. 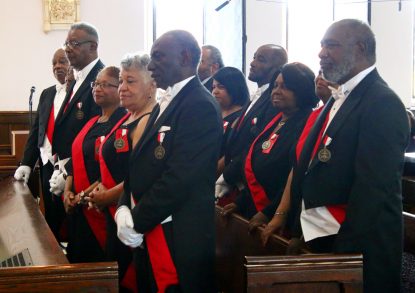 The newly commissioned Tolton ambassadors stand for a blessing by Chicago Auxiliary Bishop Joseph Perry Aug. 6 at St. Raymond Parish, Philadelphia. They are charged with encouraging prayerful devotion to Father Augustus Tolton and for promoting his cause for canonization. (Photo by Sarah Webb)

Chicago Auxiliary Bishop Joseph N. Perry recently visited Philadelphia for several events to raise awareness for the cause of sainthood for Father Augustus Tolton, the first African American priest in the United States. The bishop is hoping for a groundswell of support from the wider Catholic community, African American Catholics and others who support Tolton’s canonization.

A 19th century priest in Chicago, Father Tolton was declared a Servant of God by the Vatican’s Congregation for the Causes of Saints in 2012 and his remains were examined and reinterred in 2016, both key parts of the investigative process for sainthood. The cause is being led by the Archdiocese of Chicago.

One way to promote the cause is through “Tolton ambassadors,” and the bishop commissioned 13 individuals at St. Raymond of Penafort Church in Philadelphia’s Mount Airy section during Mass on Sunday, Aug. 6.

The Philadelphia Tolton ambassadors group is led by Eugene Frasier as presiding governor and is supported by lieutenant governor Beverly Harper, who works in the Philadelphia Archdiocese’s Office for Black Catholics. The pair are members of St. Athanasius Parish in Northwest Philadelphia.

The officers in the group include registrar Tonya Banks and chaplain Steve Mathis, members of St. Raymond’s, as well as conveners Ernest and Madeline Tymes of St. Charles Borromeo Parish. Other ambassadors include Cynthia Brown, Roslyn Butts, Floretta Caudle, Louise Frasier, Art Monroe and Wadell Ridley. Norbertine Father A. Gerard Jordan serves as special assistant to the cause.

“I think it is wonderful to be able to share with others why Augustine Tolton, a priest, should be a saint,” said Madeline Tynes. “Many do not know what we are doing to try to get an African American priest, the first in the United States, to be canonized.

An icon of Servant of God Augustus Tolton.

Bishop Perry was also present at the Knights of Peter Claver’s Fourth Degree Division Centennial banquet held at the McCall Country Club in Upper Darby on Saturday, Aug. 5. The Knights and members of the Ladies Auxiliary spoke about what they would be doing to support the cause for the canonization of Tolton.

“I am looking forward to going to Rome for the canonization of Father Tolton,” said Tolton ambassador Louise Frasier, also a St. Athanasius parishioner. “That is why I am excited about being an ambassador. I really hope that we get the momentum going so that this will happen in my lifetime, while I am still able to travel to Rome to see it happen.”

After the Mass at St. Raymond’s and confirmation of the ambassadors, Bishop Perry participated in an open Q&A session. He invited participants in a local ecumenical group to ask him anything about his homily at the Mass, his advocacy for the canonization of Augustus Tolton or any other questions they wished to ask a bishop.

He was very pointed when asked how one should respond to a person who believed Catholics are not Christians.

“What I tell people is that the Catholic Church is the Mother Church of all Christians,” Bishop Perry said. “I have had this discussion with those who have studied theology and history. They know who the Mother Church for Christians is, but some will choose to label us. We know that there are different traditions, families and churches who believe in Jesus Christ, but understand him differently,” Perry said.

The bishop told a Lutheran in attendance, who wondered if Black Catholics should create an ecumenical or interfaith movement for the Tolton sainthood cause, that he welcomed the spirit of ecumenism in sainthood causes for African Americans like Tolton.

But he shared a word of caution, pointing out Catholics have a spiritual view of sainthood.

“While we welcome other Christians to join us in the cause,” Bishop Perry said, “know that this is not just preserving a historical legacy of say, someone like Frederick Douglass or Malcolm X. This is the about canonization of saint.”

One St. Raymond parishioner, James Villarreal, asked the bishop about a line in his homily about how he “talks to Tolton.”

Bishop Perry he offers intercessory prayers in the name of Tolton and that he talks to the saintly priest in his prayers. Miracles attributed to the intercession of Tolton are being researched, Bishop Perry said, and he hopes and prays more people will come forward who have benefited from their prayers to the priest.

Augustus Tolton is not the only African American with a cause advancing toward sainthood. Many in the Haitian American and other Catholic communities are advocating for the cause of Venerable Pierre Toussaint, the Denver Archdiocese is spearheading the cause of the “Angel of Charity” Julia Greeley, and many Catholics in New Orleans are doing the same for Venerable Henriette Delille, who is referred to as “Servant of Slaves.”

Additionally, the Baltimore Archdiocese is continuing the process for Servant of God Mother Mary Lange. 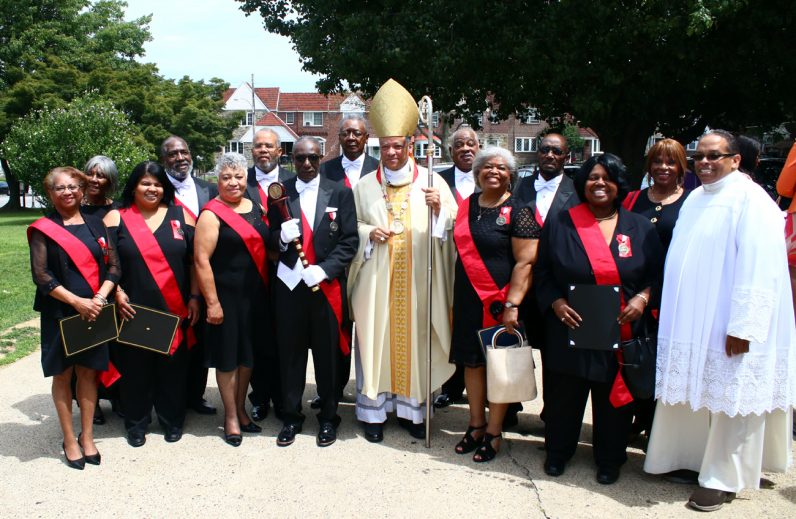 Bishop Joseph N. Perry, center, shares a moment with the 13 Tolton ambassadors he commissioned at a Mass Aug. 6 at St. Raymond Parish, Philadelphia. At right is Norbertine Father Gerard Jordan, special assistant to the cause for canonization of Servant of God Augustus Tolton. (Sarah Webb)

NEXT: Half of archdiocesan high schools to see leadership changes