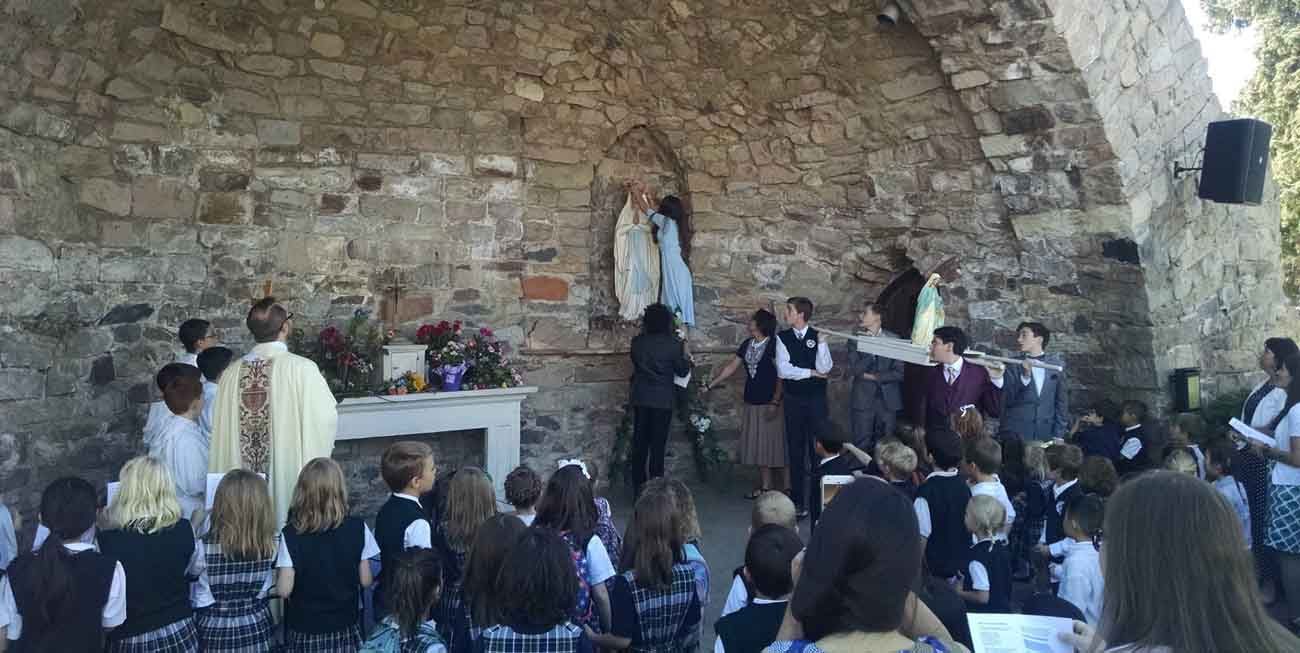 WASHINGTON (CNS) — Each year on Nov. 1, the feast of All Saints, the classrooms at Our Lady of Lourdes Catholic Classical School in Denver are not full of students, but of little saints.

Dressing up as the saints is what the principal, Rosemary Anderson, describes as part of her students’ “joyful witness of the faith,” which serves as the foundation of Lourdes Classical.

Lourdes Classical is part of a classical education approach to Catholic schooling, a movement gaining momentum in schools across the country.

“Classical education is really an integration of the whole person’s formation,” Anderson said to Catholic News Service in an interview July 19. “You’re teaching virtue in every lesson, just because what they’re learning about is relevant to them, they aren’t just reading it out of a textbook.”

In 2012, the parish school at Our Lady of Lourdes Catholic Parish in Denver shifted from a traditional Catholic school, to a classical educational approach. At the time, they had fewer than 100 students.

“The school had to do something to attract people, it was on the verge of closing,” Anderson said. “But also, I was discovering as a Catholic school teacher how fulfilling a Catholic classical education is in regards to being a teacher and being in service to the church.”

Today, 224 students, prekindergarten through eighth grade, are registered for the upcoming school year.

By combining the richness of the Catholic faith with the components of a strong education in pursuit of the true, the good and the beautiful, Lourdes Classical allows for students to encounter virtue “in all the circumstances of life,” according to Anderson.

“We don’t have an anti-bullying program,” Anderson said. “We don’t have anything like that because we don’t need it. The kids understand the meaning of Christian charity.”

It isn’t just its countercultural education that sets the school apart. Lourdes Classical places strong emphasis on the Catechism of the Catholic Church’s call for parents to be the “primary educators of their children.”

“We try to reinforce and support the parents in understanding the importance of that role,” Anderson told CNS. “Modern culture and years of progressive education have tried to strip that right away from parents. What we try to do is say, ‘No, what you’re doing at home, we’re here to help and support that.'”

Lourdes Classical is not the only Catholic classical school in the Archdiocese of Denver. Frasatti Catholic Academy will open its doors for the first time this fall, and Bishop Machebeuf Catholic High School recently added an optional classical track to their curriculum.

“When we look at classical Catholic education, just the benefits it has to offer are numerous,” said Kevin Kijewski, superintendent of schools for the Archdiocese of Denver. “It is education for its own sake.”

Classical education finds its roots in the classical world of art, literature and philosophy, which then developed through Western education, according to Michael Van Hecke, president of the Institute for Catholic Liberal Education.

“They are time-tested truths that we learn from great men and women that we can emulate in our society today,” Kijewski said in an interview with CNS July 19. “It’s almost equipping our kids with the tools, tips, and techniques they need to have in order to survive in this really rapidly changing world where secular thought is pretty much taking over.”

But for Catholic schools using a traditional education models, classical themes can still be introduced.

In the fall of 2016, the Cardinal Newman Society, a nonprofit organization dedicated to “Promoting and Defending Faithful Catholic Education,” published a revised Catholic Curriculum Standard for Catholic educators.

“The standards rely primarily on the church documents on Catholic education with additional resources coming from Catholic and classical authors,” said Denise Donohue, deputy director of K-12 programs at the Cardinal Newman Society, in an email July 19 to CNS.

While not exclusively classical, the Catholic Curriculum Standard expands upon several classical themes.

“The standards are premised on the key components of the integral formation of the human person, man’s intellectual ability to understand objective reality, the dignity of the human person and the acquisition of virtue, a synthesis of faith, life, and culture, and the development of a Catholic worldview to bring the student deeper into the heart of the Catholic Church,” Donohue wrote.

Twelve U.S. dioceses implemented the use of Catholic Curriculum Standards, spanning over 390 schools and 119,258 children. In addition, other schools have adopted the standards for use in various capacities.

The Institute for Catholic Liberal Education hosts several conferences and programs throughout the year, as well as teacher formation programs. In addition to service programs in schools, they founded the Catholic Textbook Project, a textbook series specifically for Catholic Schools, which are used in almost 100 dioceses.

“It takes these same principals of education and puts them into a usable textbook by a typical teacher at a typical school,” said Van Hecke in an interview with CNS July 21. “So it starts to introduce some of the light and joy that we experience in classical schools, into the curriculum of any school, no matter what their acting philosophy or curriculum is.”

In addition to being president of the Institute of Catholic Liberal Education, Van Hecke is publisher of Catholic textbooks and headmaster at St. Augustine Academy in Ventura, California.

Not only are schools throughout the nation adopting a classical approach to education, but they’re helping others establish classical schools of their own.

Parents and parishioners of St. Jerome Catholic Church in Hyattsville, Maryland, came together to write a new curriculum program for St. Jerome’s Academy, which not only turned into a plan for their school, but has been an influence on schools around the country, such as St. John Bosco Schools in Rochester, New York, which uses part of the St. Jerome’s classical education plan.

“We like to believe that our school is really trying to get to the heart of exposing them to the beauty and the rich traditions of the Catholic Church that have been laid out over time,” Flynn said in an interview with CNS July 24. “Granted it’s not perfect, it’s had its trials and tribulations, and if you’re trying to search for the truth, if you want to really love the truths that are in front of you, you have to grapple and wrestle with them, which goes beyond a really good textbook.”

With much support from the Archdiocese of Washington, both financially and philosophically, St. Jerome’s Academy now thrives as the only classical Catholic school in the archdiocese.

On Sept. 4, nine students will embark on a four-day canoe camping trip to start off their school year, engaging the students in “sacramental imagination,” according to Deacon Chris Roberts, president and theology teacher at Martin Saints Classical High School.

“I think the most important thing in Catholic education is to introduce our children to Jesus and his church, to give them a sacramental imagination, a sacramental way of seeing the world, an appetite for seeking truth, beauty, and goodness, a sense for history, but finding classical as a means to an end to do that,” Deacon Roberts said. “Classical is a discipline, but it’s not an absolute end to itself.”

PREVIOUS: The Catholic roots of the ‘immortal’ Henrietta Lacks