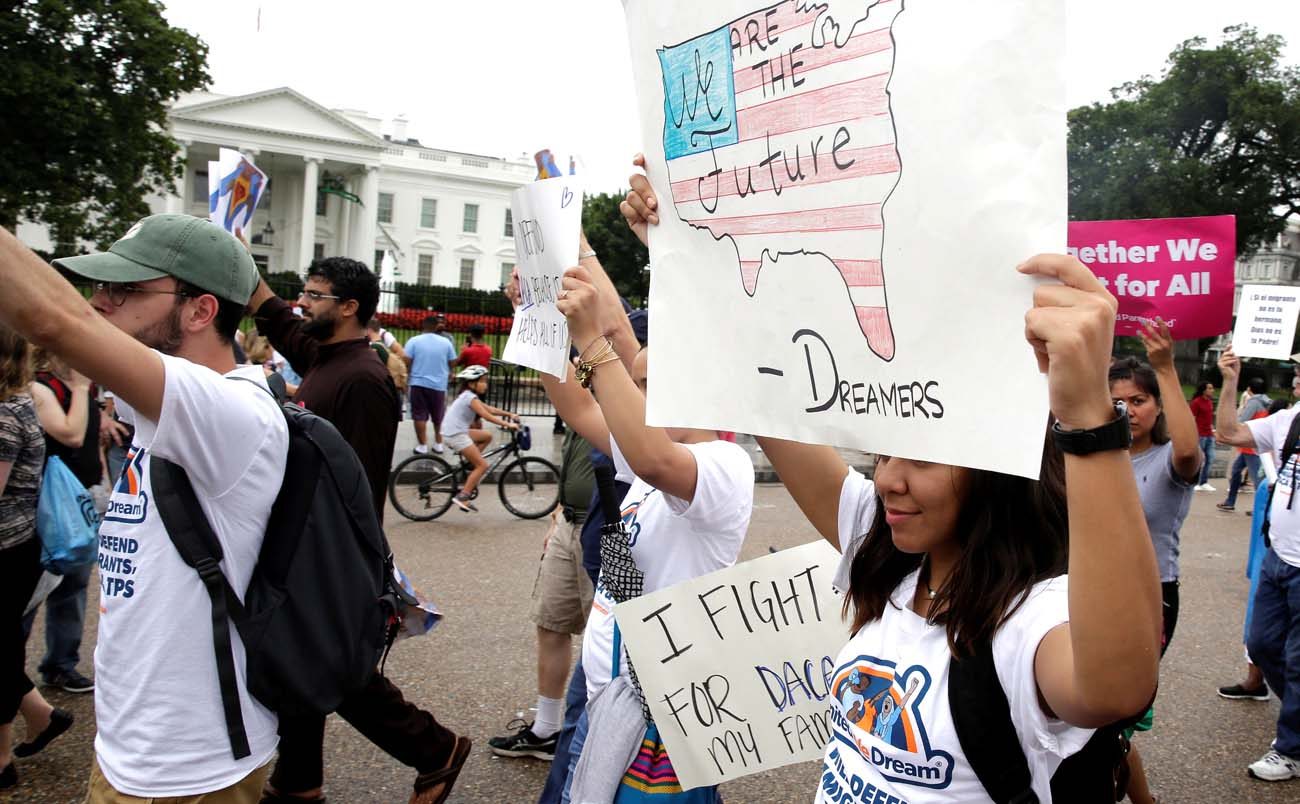 WASHINGTON (CNS) — The Aug. 15 rally had a celebratory feel as hundreds turned out to mark the date in which five years ago many of the young migrants gathered near the White House applied for an opportunity at a different life.

On that date in 2012, many of them were first able to apply for what’s known as the Deferred Action for Childhood Arrivals, known as DACA, giving some youth who were brought into the United States as children by their parents without legal documentation a work permit and temporary reprieve from deportation.

For those like college graduate Greisa Martinez, whose only way to make a living without a work permit was to sell used cars in Texas, it meant she could finally apply for a professional job, make more money and put a down payment on a house. After applying for DACA, Jung Woo Kim, brought from South Korea to live in the U.S. by his parents, also was able to put behind a life of service-industry jobs, and put his college education to work at a California nonprofit that provides social services to immigrants and seniors.

On the program’s fifth anniversary, both DACA recipients offered their testimony at the White House rally, attended by hundreds who have equally benefited, as well as their supporters, hoping the Trump administration will continue the program that changed their lives.

But as summer comes to an end, DACA — established by executive order under President Barack Obama — faces an uncertain future in the hands of President Donald Trump. Although Trump ran a strong anti-immigration campaign and vowed to get rid of DACA if elected, his public comments regarding the program have been riding a political roller coaster. He said he’d make a decision regarding DACA “with heart.”

He also later signaled he would not sign a recently introduced bipartisan bill that would legalize DACA recipients, known as “Dreamers” because of the acronym of the Development, Relief and Education for Alien Minors Act, also referred to as the DREAM Act.

Those watching for signals of what Trump will or won’t do, including many bishops and Catholics at colleges and community organizations, have been making public pleas of late in light of a looming legal threat that has placed a Sept. 5 deadline in the program’s future.

That’s the date Texas Attorney General Ken Paxton, along with nine officials from other states, have said they will sue the administration if the program continues. During his brief stint as Homeland Security chief, John Kelly, now the president’s chief of staff, wouldn’t commit to protecting DACA and suggested Congress should try to find a solution. It’s not clear what will happen to the 750,000 to 800,000 young beneficiaries if DACA is allowed to expire.

“It’s scary and it’s real,” said DACA beneficiary Martinez to the crowd gathered at the rally, recognizing the feelings that many Dreamers face, but encouraging them to put their energies in the fight ahead.

Weeks before, Martinez had expressed during an “Immigration Policy and Practice Under the Trump Administration” panel, the same resolve, particularly because living with the fear of deportation and having to work at jobs that pay under the table was a difficult reality.

“I’ve been thinking about my life before DACA … I remember feeling really lost,” she said.

Having tasted professional possibilities and a life without deportation worries, DACA recipients like Martinez say there’s no going back. The fight for DACA would only intensify as it faces threats but the young migrants are ready for “the fight for our lives,” she said.

For Martinez, the memories of the initial fight for DACA keep her going.

“We pushed the president of the United States to do something that he repeatedly said he did not want to do,” she said referring to Obama. “I have to remind myself of that … we made that happen.”

Dreamers also were able to get, in a matter of days, the support from 20 attorneys general from around the country who tried to counter the lawsuit threat from Texas’ Paxton by sending a letter to Trump urging him to keep the program. That shows, Martinez said, “that we are stronger than we were in 2011. We are stronger, our networks are broader.”

She said members of Congress have expressed support, and “even Donald Trump has said he has a special place in his heart for someone like me,” referring to the president’s comments that some DACA recipients are “incredible kids.”

In Catholic circles, Dreamers have long counted with support.

In an Aug. 15 opinion piece published by the political website The Hill, Archbishop John C. Wester of Santa Fe, New Mexico, voiced the support of “my brother bishops” for DACA.

“We know DACA (recipients) have been given a chance to achieve their God-given potential,” Archbishop Wester wrote, adding that Congress, too, needs to find a solution to help the approximately 800,000 youth who will be affected should the program end.

At the Aug. 15 rally, Catholics from various organizations showed up to support DACA and its beneficiaries, including Sara Benitez, Latino program director of the Washington-based Faith in Public Life.

“We still have hope,” said Benitez. “And we’ll fight as long as we need to.”

“Mr. President, you have the power to set these young people free so that they may add to the greatness of this nation. Somehow, we have forgotten that immigrants are people who may have needs but they also have gifts to offer,” said Larry Couch, director of the National Advocacy Center of the Sisters of the Good Shepherd.

As he watched the crowd chant and cheer while celebrating DACA’s fifth anniversary, Franciscan Father Jacek Orzechowski recalled the words of Pope Benedict, who said that the church must not remain on the sidelines in the struggle for justice.

“We must be proactive in building communities that are inclusive,” Father Orzechowski said. “We must live out the Gospel values of justice and preferential option of the poor.”

The Franciscan priest was the first clergy member to offer prayers in a 22-day vigil to defend DACA that includes a group participating in daily prayers and a protest in front of the White House from Aug. 15 until the Sept. 5 deadline that the program faces.

“For me this is part of Jesus’ teachings,” said Father Orzechowski. “We are not here because we’re Catholics but because we are part of one family.”

If you remember, he said, in the Gospel, Jesus told his counterparts, “Do not be afraid,” when they faced fears. Today, many of those gathered at the rally are facing fears. Families in the greater Washington area, as well as the rest of the country, are facing fears due to their immigration status, Father Orzechowski said. And the Gospel calls Christians, he said, to share the good news when people are afraid of what may happen in their future.

“We as a church have a responsibility to accompany and to speak the message ‘do not be afraid,’ not just with words but with actions of accompaniment and solidarity,” he said.

NEXT: Chicago cardinal thanks Texas parish for ‘welcoming the stranger’