U.S. Catholic parishes, schools happy to be in path of solar eclipse 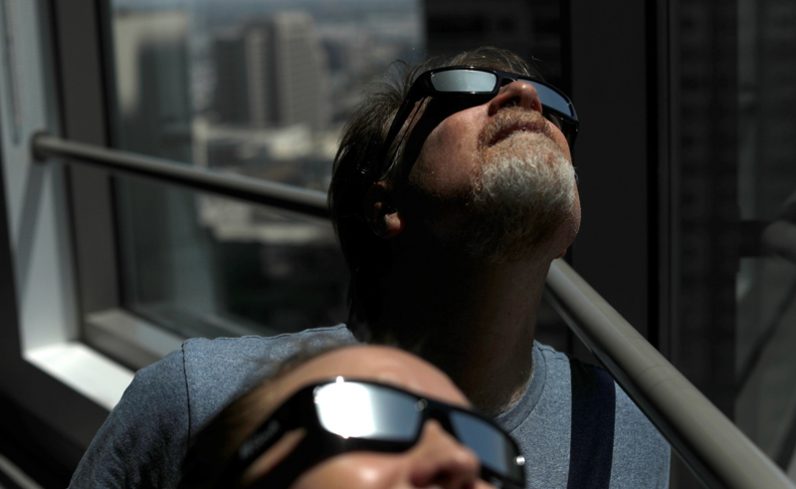 WASHINGTON (CNS) — U.S. Catholic parishes and schools located in the 70-mile-wide path of the total solar eclipse Aug. 21 plan to take part in this rare event with everything from providing parking spaces or viewing sites to offering overnight retreats or all-day events with family activities or scientific lectures.

The total eclipse — to be viewed only with proper eyewear — begins Aug. 21 in Oregon at 10:18 a.m. PDT and ends in South Carolina at 2:43 p.m. EDT after going over Idaho, Wyoming, Nebraska, Kansas, Missouri, Illinois, Kentucky, Tennessee, Georgia, North Carolina and South Carolina.

How long viewers will see the moon covering the sun depends on where they will be on its coast-to-coast path. Some may only see it for a few seconds, others for a couple of minutes. Maximum eclipse — at two minutes and 40 seconds — takes place in Hopkinsville, Kentucky.

But no matter the length of time extent, this historic event is drawing thousands to places where they can get a better view if just for a few minutes and to also celebrate for the day or even a long weekend.

And while they are in the path of the eclipse, some hope they will stay awhile and visit.

Renee Brueckner, operations director of the National Shrine of the Miraculous Medal in Perryville, Missouri, one of the sites in the path, hopes some of the eclipse-viewing crowd makes its way to the shrine where they will have extra tour guides on hand the weekend of Aug. 19-20. The shrine, which is just finishing a major capital restoration project, is ready for visitors but its offices will be closed from 12-2 p.m. local time Aug. 21 for sky gazing.

In Perryville, the total eclipse time is slated to be 2 minutes and 34 seconds, beginning at 1:18 p.m. CDT.

Crowds already will be across the street during the weekend for solar eclipse festivities including food and games at a picnic area owned by St. Vincent de Paul Parish.

Brueckner said she hopes visitors will come to the shrine and “get some contemplative and quiet time.”

It’s not the only place to highlight spiritual renewal. La Salle Retreat Center in Wildwood, Missouri, is hosting an overnight retreat the night before the eclipse and is inviting the public to its grounds on the day of the event, which there will begin at 1:15 p.m. CDT and last 2 minutes and 14 seconds. The center will sell bottled water and viewing glasses.

“Guests will be able to walk around our beautiful grounds with meditation areas, including a labyrinth and grottoes,” the center’s marketing and program coordinator, Michelle Cook, told the St. Louis Review, newspaper of the St. Louis Archdiocese.

Our Lady of Good Counsel Retreat House in Waverly, Nebraska, is offering rooms and transportation for eclipse viewers. The retreat center, operated by the Lincoln Diocese, is not directly in the path of the total eclipse, but will take guests to and from the airport and to a town an hour away for solar viewing at 1:03 CDT. The retreat center also is providing box lunches for viewers and will have Mass and eucharistic adoration in the morning.

COR Expeditions, a Catholic outdoor program in Lander, Wyoming, that got its start at Wyoming Catholic College, also is offering an eclipse package that involves eight days of backpacking in the Wyoming’s Wind River Mountain Range Aug. 19-26. The group is providing food, technical gear, instructors and transportation and says on its website that the trek after viewing the eclipse will give hikers the chance to “allow the awesome beauty of the eclipse to sink in.”

For those who might want to take in a lecture or just activities, that’s covered too.

Robert Mitchell, professor of engineering and physical science at St. Ambrose University in Davenport, Iowa, will conduct a live broadcast from Aurora, Nebraska, where the total eclipse can be viewed. The broadcast will be shown at the Putnam Museum in Davenport and will be livestreamed on YouTube. beginning at 11 a.m. CDT with talks and PowerPoint presentations and then a presentation on the eclipse as it happens.

Mitchell said the sky will start to darken around 11:45 a.m. local time but the maximum part of the eclipse will be visible around 1:15 p.m. when it will be dark like night in Aurora, which he noted will confuse birds and other animals.

In an interview with The Catholic Messenger, newspaper of the Davenport Davenport, the professor echoed the often-said warning of not looking directly at the sun during the eclipse.

“Wear proper viewing glasses, get a filter for a telescope, make a pinhole viewer, make a mirror in an envelope or make your own cardboard projector,” he said.

Another Catholic college professor equally excited about the eclipse is Ryan Maderak, assistant professor of physics and astronomy at Benedictine College in Atchison, Kansas, which is directly in the path of the total eclipse.

“This is literally the event of the century, and it is falling right in our laps,” he said. The college will experience about 2 minutes and 18 seconds of total darkness starting at 1:07 p.m. CDT.

The college has a sold-out event the day of the eclipse with seating in its football stadium for viewing and free solar glasses to the first 7,500 at the gate. The day before the eclipse two astronomers from the Vatican Observatory will give presentations.

The big day will include morning and evening Masses, meals at the school’s dining hall, activities at the stadium such as face painting, Frisbee games and water balloon tosses and will end with a “celestial concert.” During the day, the school, which just opened a new observatory, will have its telescopes rigged for viewing the sun.

The eclipse will also be a big moment for Catholic schools that are in session.

“It really is like heaven” for a science teacher, said Meg Darke, a parent volunteer in the science lab at Christ the King School in Nashville, which is in the total eclipse path. “We’re going to see something that day that man can’t re-create. We cannot duplicate with all our technology what we’re going to witness. ”

Julie Petcu, science enrichment coordinator at St. Matthew School in Franklin, Tennessee, hosted a workshop this summer for area teachers, led by an educator from NASA.

St. Matthew’s is just outside the total eclipse band but Christ the King School is right in it and on Aug. 21 the school will host a “solar-bration” event for the school community and parents.

“The entire community will be involved in doing activities that are eclipse related,” Darke said. All the students and faculty will gather on the field beside the school to watch the eclipse and their parents will be invited to join.

Immaculate Conception School in Clarksville, Tennessee, also lies in a prime viewing location, just south of the center line of the path of the total eclipse, which will pass through Hopkinsville, which is on the other side of the Tennessee-Kentucky state line.

The total eclipse is expected to be visible in Clarksville for 2 minutes and 21 seconds. Immaculate Conception Principal Stephanie Stafford said that from the first day of school to the eclipse, they would be talking about this event.

And even through many local schools will be closed that day, Immaculate Conception will stay open, she told the Tennessee Register, Nashville’s diocesan newspaper.

“We’re leaving it up to the parents,” she said, “to see if they are willing to fight the traffic.”

Contributing to this report was Andy Telli in Nashville, Anne Marie Amacher in Davenport and Jennifer Brinker in St. Louis.