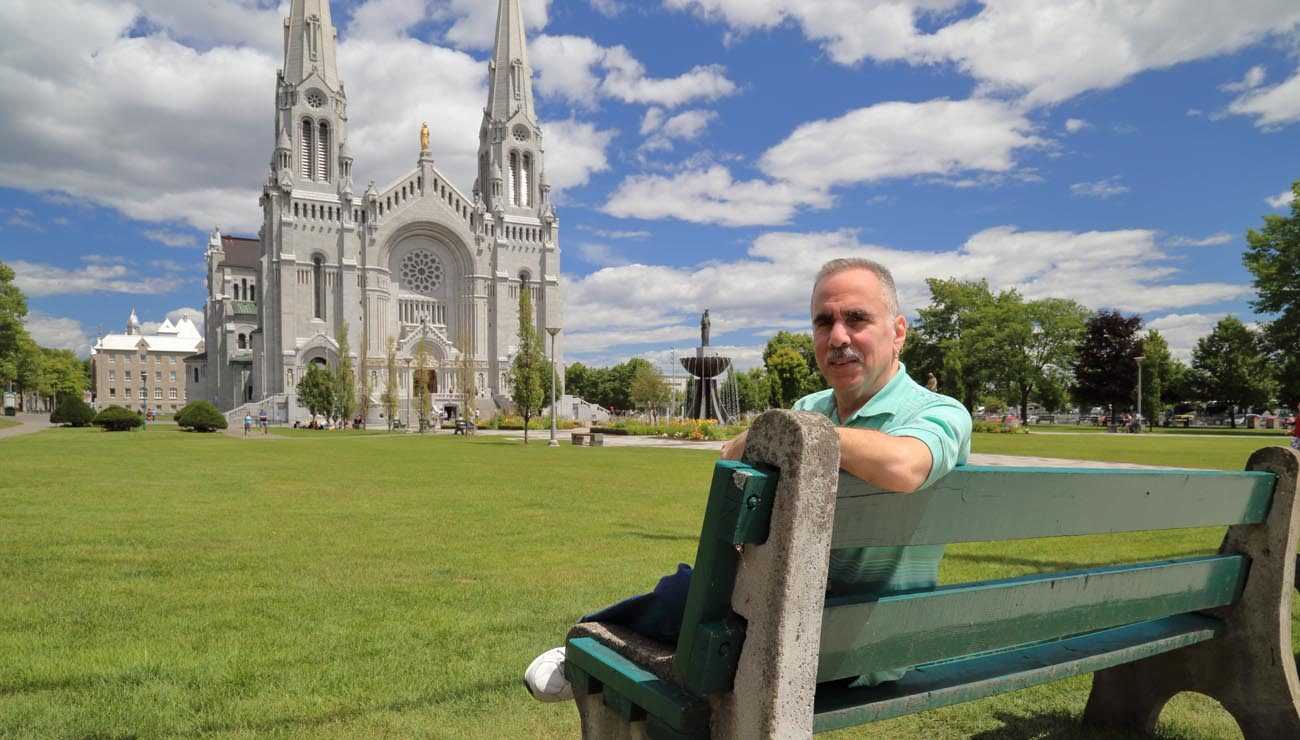 Leonard DiVittorio of the New York borough of Queens poses for a photo July 23 outside the Basilica of Ste.-Anne-de-Beaupre in Quebec. DiVittorio has been organizing the Ahearn Memorial Pilgrimage to the basilica. (CNS photo/Philippe Vaillancourt, Presence)

STE.-ANNE-DE-BEAUPRE, Quebec (CNS) — Leonardo DiVittorio approached the statue of St. Anne. As part of the opening ceremony of the feast of the grandmother of Jesus July 25, he laid a wreath of flowers, a symbolic gesture intended to mark the Ahearn Memorial Pilgrimage’s 95th and last visit at the Basilica of Ste.-Anne-de-Beaupre.

His face reddened with emotion, his mouth slightly tense, he carried the prayers of several generations of pilgrims who have, each in their own way, forged what was the oldest American pilgrimage on Canadian soil.

The Ahearn Pilgrimage is an institution in Ste.-Anne-de-Beaupre. Its importance is such for the history of the shrine that a stained-glass window in the basilica is devoted to the founder of the group, Andrew Ahearn. After a work accident left him disabled, this American from Springfield, Massachusetts, was told by his doctors that he would be crippled for the rest of his life. As a last resort, he went to Ste.-Anne-de-Beaupre in 1922, where he was inexplicably healed at the foot of the statue of Ste. Anne, on her feast day. For many faithful, this remains a defining miracle for the shrine founded in 1658.

Andrew Ahearn’s daughter, Rita Ahearn Rielle, recounted in a book the beginnings of the annual pilgrimage that culminated in the 1950s and 1960s, when 300 American participants, including people in wheelchairs or even in rolling beds, were brought to the Quebec town by train.

Ahearn promised to bring the sick and the crippled to the basilica every year if he was cured. He kept his promise all his life. After his death, Rita and Louis Rielle took over. When they could not do it anymore, DiVittorio took charge, vowing to Ahearn’s son, Thomas, that he would be the last to organize the famous pilgrimage; when it became impossible to continue, the name Ahearn would retire as well.

DiVittorio said although the time has come, the call to retire the pilgrimage is “heart-wrenching.” He said the change was necessary because the Redemptorists will no longer manage the basilica inn; they want to focus their energy on the shrine.

“We’re not innkeepers,” said Redemptorist Father Charles Duval, superior of the Ste.-Anne-de-Beaupre province. For him, the end of the Ahearn pilgrimage is a sign of the times that the church and this Quebec shrine face. 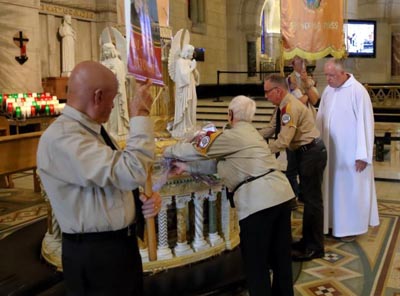 Leonard DiVittorio of the New York borough of Queens, third from left, leaves flowers at the statue of St. Anne July 25 in the Basilica of Ste.-Anne-de-Beaupre in Quebec. (CNS photo/Philippe Vaillancourt, Presence)

Short on staff, the Redemptorists have entrusted the management of the inn to a company and have chosen to end the cafeteria service. The future of the inn remains unclear, as the congregation may decide to abandon it altogether. That makes the situation too uncertain for his group, said DiVittorio.

Bringing pilgrims with special needs from the United States to Canada each summer for a whole novena requires complex logistics for care and meals. “I can’t do this for my pilgrims,” DiVittorio said.

Michael Smith, 27, and his girlfriend, Ambur Carter, 24, were the youngest members of the group. Smith’s father died when he was 10. His aunt introduced him to the group when he was 11. He has come to Ste.-Anne-de-Beaupre every summer since.

“It’s nice, heartwarming. It gives you hope for humanity. I use all my vacation time at work to be here. I’d rather be here than on a cruise somewhere,” he said.

He invited Carter to accompany him to Quebec last year; she returned this year.

“It’s a big deal,” Carter said. “I felt very special to be able to come up here with them, to see so many people celebrating together in the same place.”

Frank Sadowski, 72, of Northampton, Massachusetts, started coming in 1959, after he lost an arm to an illness.

“I came up here, and I noticed what other people had to endure in their lives. I realized that losing my arm was only an inconvenience. I became committed, and I’ve being trying to make it every year since,” he said.

“In the past, we had portable respirators. … We had five passenger cars and a baggage car. That was basically our group back then. We would go to Montreal, switch over to sleepers on July 16, and arrive here on the morning of the 17th for the beginning of the novena.”

This annual trip is so important in his life that his honeymoon was spent in Ste.-Anne-de-Beaupre, caring for the disabled.

Another pillar of the group, Karen Shaw, could be seen on her electric wheelchair at every Mass in the Basilica, listening closely and often holding a rosary in one hand.

“I love it,” she answered with a wide smile when asked about the significance of the pilgrimage in her life. Shaw, from New Jersey, needs special help to make the trip. She said she prayed the novena for her family.

DiVittorio said he is thankful for the extraordinary legacy of a pilgrimage that has changed the lives of thousands of people for almost a century. Now 59, this former teacher and principal from the New York borough of Queens said he will continue to come on his own each year.

By leaving flowers at the feet of the statue where Andrew Ahearn was healed 95 years earlier, he honored a promise that has been passed on for more than three generations. And as the assembly sang “Salve Mater Anna,” he took a few steps back and stared at the statue of St. Anne, with tears running down his cheeks.

NEXT: Head of Knights of Malta relief efforts says sea rescue is a ‘mission’