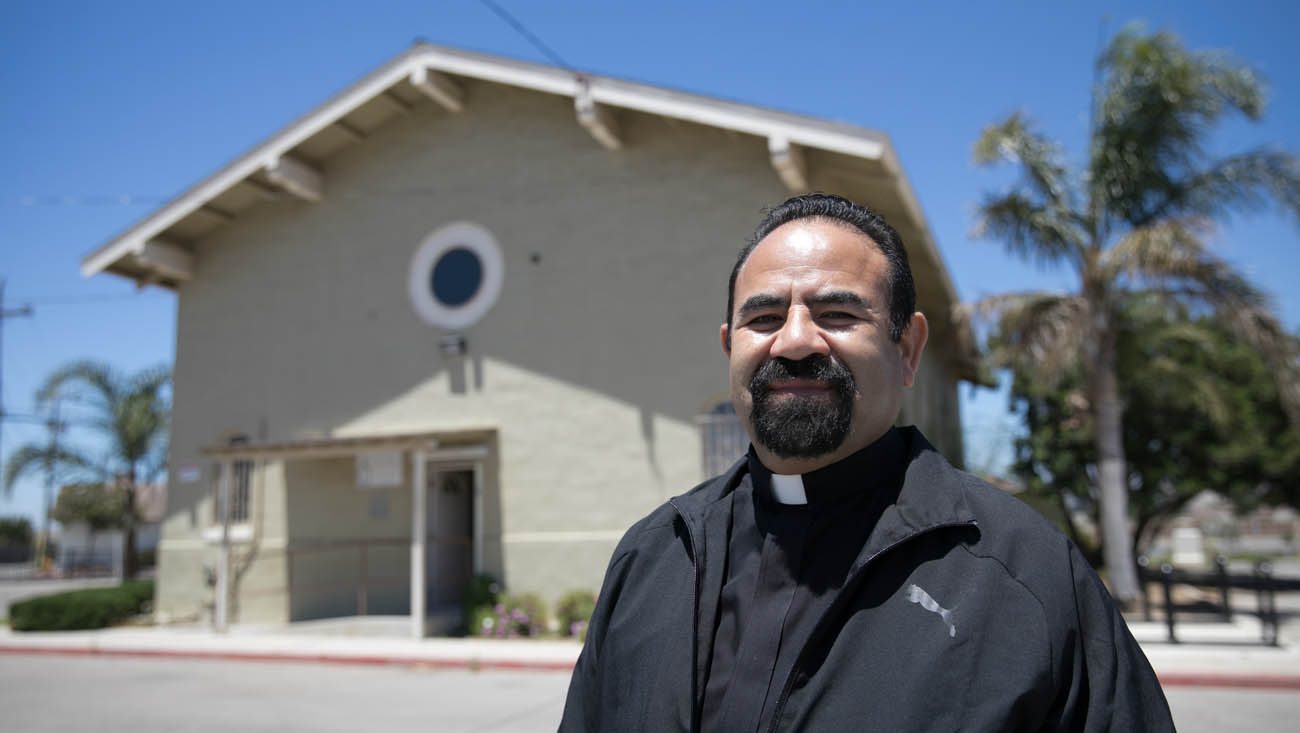 For his efforts in the Catholic community and the wider community, Catholic Extension has chosen Father Herrera to receive the 2017-2018 Lumen Christi Award, its highest honor.

The priest, who is pastor of Holy Trinity Church in Greenfield in the Diocese of Monterrey, will be officially presented with the award during a Mass at his parish Dec. 10. This year marks the 40th anniversary of the award.

When Father Herrera arrived at Holy Trinity Parish and saw that parishioners were struggling to feed their families and had few opportunities for a brighter future, he decided that his parish would become a beacon of hope.

Together with his parishioners, he started new programs focused on strengthening faith, education and community.

“The Lumen Christi Award shines brightly to honor and give recognition to people who are great missionaries in our country,” said Father Jack Wall, president of Catholic Extension. “Father Herrera is a great example. He has stood up as a shepherd for his flock and raised them up. He is a ‘voice for the voiceless,’ but he is also helping people to find their own voice, helping them to aspire and to dream. He is a true missionary.”

Catholic Extension’s selection of Father Herrera and his bustling parish of immigrant parishioners also shines a light on a seismic shift that has occurred in the Catholic Church over the past 25 years.

A new study released by the Public Religion Research Institute documented what America magazine called the “shift from a predominantly white church clustered in the Northeast and Midwest to a church influenced by Latin American immigration and located in the South and West.”

Before Father Herrera was born, his parents had worked in the Salinas Valley. After his birth in Mexico — he is the third of seven children — his father continued to travel there regularly as a migrant worker to support the family.

Enduring his father’s long absences, he developed a soft spot for the plight of migrants. By age 10, Father Herrera felt the tug toward priesthood. Wanting to be “a voice for the voiceless,” he entered the seminary in Guadalajara, Mexico, after high school.

When his family immigrated to the Salinas Valley, he caught the attention of the bishop of Monterey, who asked him to join the diocese. Ever since, he has served the poor in several parishes, working primarily with immigrants.

“I have come full circle,” he said in a statement. “As the son of immigrants, I am now able to serve immigrants in the same location.”

As pastor of Holy Trinity, Father Herrera shepherds the only Catholic church in Greenfield. Catholic Extension helped build the church in 1934.

A city of 16,000, Greenfield is in the heart of the Salinas Valley. It is comprised mainly of immigrants who come to harvest lettuce, broccoli, grapes and strawberries. Half of the city’s population is under age 21. The average income there is almost 40 percent below the national poverty level.

Father Herrera is particularly focused on the youth of the parish. Most of their parents, 90 percent of whom are farmworkers in nearby fields. Their work schedules keep them away from home.

This past May, 446 children received their first Communion. Father Herrera also has ramped up the number of teenagers being confirmed. Hundreds are in the confirmation program each year, and he encourages them to be leaders. The teens become his core group of volunteers because they have the “energy, wisdom and understanding” to guide others, he said.

With Catholic Extension’s help, this summer the parish started a new summer camp for children. The program includes lessons on faith and on science.

For adults, Father Herrera tries to work around their long work schedules. When agricultural fields are dormant, he holds daily Bible classes that attract more than 400.

The parish has six Masses each weekend, including four in Spanish. Between liturgies, baptisms and quinceaneras, about 4,000 people come to church each weekend.

Father Herrera believes that the Catholic Church has a role in addressing human needs alongside the spiritual ones. He knows that his parishioners confront pervasive poverty and complex problems, and he wants to “bring the Catholic faith to the streets.”

“We need to put the Catholic Church in the social arena, so it not only helps people grow in their faith but also to grow as members of a community,” he explained.

“Father Herrera advocates for our community to ensure that we get what we need spiritually as well as physically, emotionally, intellectually and in other aspects that are needed for a balanced life,” said Greenfield Mayor Jesus Olvera Garcia, who is a Holy Trinity parishioner. “Holy Trinity Catholic Church has the doors open to welcome everyone to be part of their events and services.”

Father Herrera’s dream is that all his young parishioners will attend college, so the parish holds fundraisers to provide college scholarships and connects students to other resources and scholarships.

In nominating the priest for the Lumen Christi Award, Bishop Richard J. Garcia of Monterey said: “Father Herrera has put together a wonderful team helping him in the community. He is building the community so that everyone feels at home, like one family. He cares so much about advancing the whole community.”

Catholic Extension, the Chicago-based papal society devoted to building churches and the Catholic Church in America’s poorest places, has been supporting dioceses in California since 1911. It now serves six of the 12 dioceses, which make up 92 percent of the state’s territory.

NEXT: Kansas priest recalls friendship with martyr as beatification nears