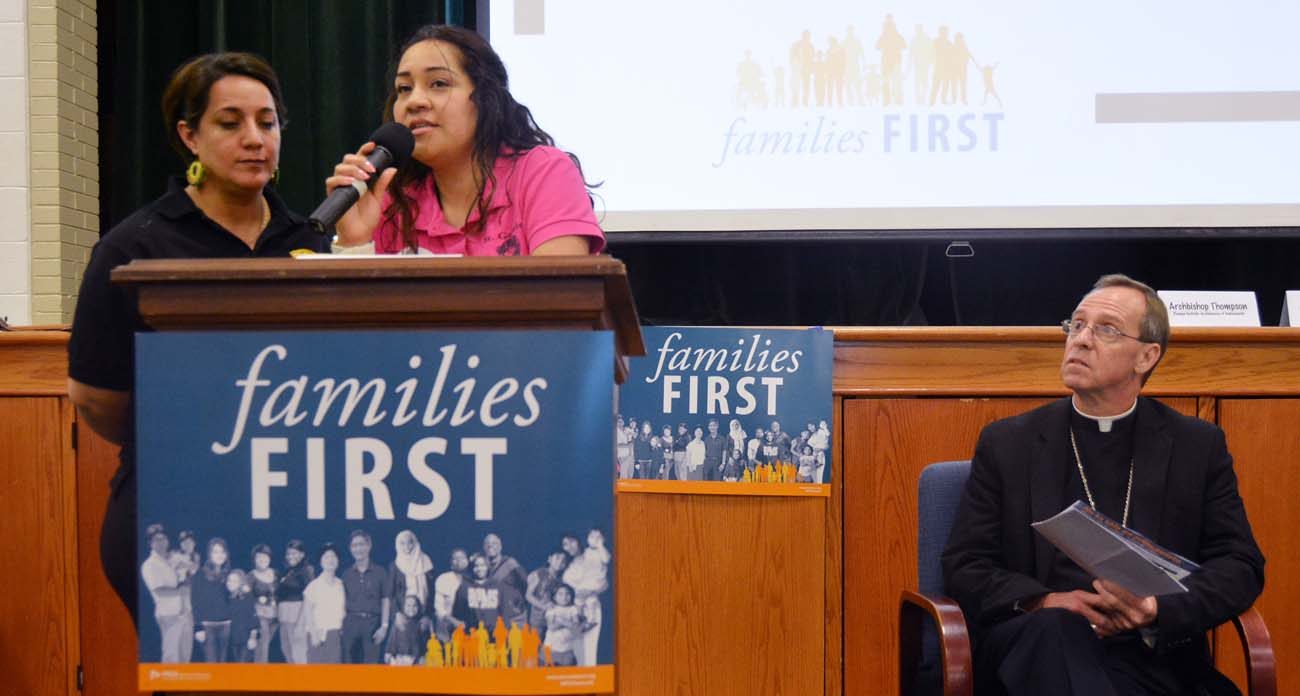 Maira Bordonabe, a member of St. Michael the Archangel Parish in Indianapolis and a married mother of two, shares her story of being taken for deportation at an Aug. 30 rally. (CNS photo/Natalie Hoefer, The Criterion)

INDIANAPOLIS (CNS) — It was a typical day for Maira Bordonabe last spring.

“I dropped my children off for school, then I spent some time in (adoration),” said the married mother of two children, ages 7 and 12, and a member of St. Gabriel the Archangel Parish in Indianapolis.

On that typical spring day as she pulled out of the parking lot to head home, Bordonabe had no idea she would not see her family again as a free woman for nearly five months.

On her way home, she was stopped by two Immigration and Customs Enforcement officers charged with the task of taking her to Chicago, from where she was then to be sent back to her native Mexico.

Bordonabe, now in her 30s, had immigrated to the United States at a younger age with her family. She married a U.S. citizen, her children are U.S. citizens, and she is working toward a degree in human resources to help her husband provide a better life for their family.

She hardly fits the criteria that President Donald Trump claimed would be the focus of his administration’s deportation efforts during a “60 Minutes” interview days after he won the presidential election: undocumented immigrants who were “criminal and have criminal records, gang members, drug dealers.”

Nevertheless, Bordonabe was immediately taken to a deportation center in Chicago.

“I spent four months there with other women, most of them mothers,” she said, her voice quivering with emotion as she shared her story with a crowd of more than 350 people at a “families first” budget rally Aug. 30 hosted by Indianapolis Congregation Action Network at Holy Spirit Parish. “One woman from Africa had been there for eight months trying to prove her need for asylum.”

Unlike the woman from Africa, Bordonabe said she was “blessed” to have help and support from her family and her faith community at St. Gabriel Church, where prayer vigils were held nearly every Monday evening that she was absent.

When she got no response to a request for a review of her case for asylum, her supporters contacted Rep. Andre Carson, D-Indiana, for help.

That move “helped her get the initial step to say, ‘I can’t go back due to credible fear,'” Angela Adams, Bordonabe’s lawyer, told The Criterion, newspaper of the Archdiocese of Indianapolis. “Only then can you go to a judge to plead your case.”

The process was long, and the time away from her family “was very hard. I just wanted to go back home,” Bordonabe shared with the audience. Overcome with emotion, she paused to recompose herself as tears fell from her eyes.

In the end, Bordonabe was granted a trial to plead her case in court.

Concern for the family’s safety prevented Adams from revealing the specific reasons why the judge granted Bordonabe a “withholding from removal.” But the reasons were grave, she assured.

“Persecution is very hard to prove in Mexico,” Adams explained. “The circumstances were such that the judge agreed that she would face persecution if she had to go back. It’s a long, in-depth, six page decision, not just a check in a box.”

While Bordonabe now can never be deported, she must check in with Immigrations and Custom Enforcement every six months.

Still, the case was won, and the federal government, which had 90 days to appeal the ruling, opted not to challenge the decision. Bordonabe was free to return home.

Her husband and children arrived in Chicago, Adams recalled. Bordonabe had her few belongings packed in a box and was ready to go.

But then something happened that Adams said still leaves her in disbelief.

“ICE officials, one in particular, changed his mind and said, ‘No, she has to wait 90 days to see if there’s another country we can send her to,'” Adams said. “ICE made the decision in front of the children. Everyone lost it. It was a blow. She literally had the document (for her release) in her hand signed and her belongings packed up.”

Carson again was called upon to intervene, and Bordonabe was released within four days. She returned home with her family in late August.

“Before this (occurrence at the deportation center) happened, even as an immigration attorney I thought, ‘Oh, it hasn’t changed much under this new administration,'” said Adams, who has been involved in immigration law for more than 15 years. “But I can tell you from personal experience and being in the field, it’s a lot different.

“There’s no regard for humanity. There’s a lack of respect. I feel like there’s been a call or a directive from above. (ICE officials have) been given the power to break up families, and it’s not healthy.

“Everyone in the family had a really difficult time dealing with her absence. They were devastated. The children didn’t understand. They just needed their mother home.”

Bordonabe’s 12-year-old son Luis can attest to the hurt of losing his mother for nearly five months.

“I was mind-blown,” he said of the ICE officer’s decision not to release his mother. “I was so disappointed. Me and my sister had hopes that she would come home, but she didn’t. It was really hard.”

“This is a very hard situation to put a family through,” she said at the event.

“We need to keep families together.”

NEXT: Convalidation brings couples into the full life of the church