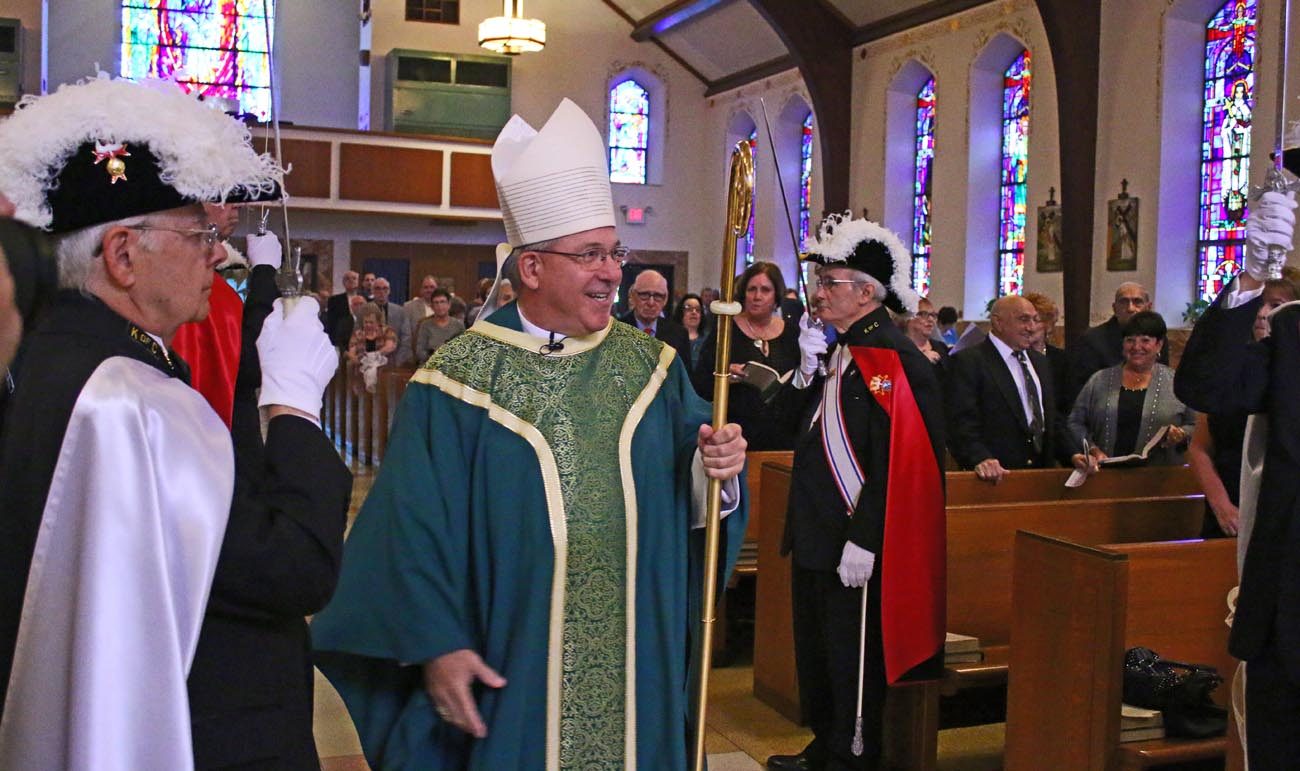 Bishop Joseph Cistone, a son of Our Lady of Consolation Parish and current bishop of the Diocese of Saginaw, returned to the Northeast Philadelphia parish to celebrates its 100th anniversary Mass Sunday, Oct. 22. (Photo by Sarah Webb)

Our Lady of Consolation Parish in Philadelphia, which celebrated its 100th anniversary on Sunday, Oct. 22, is a prime example of how parishes can evolve over time.

In this case Consolation went from an Italian personal parish at its founding to a multicultural territorial parish in 2013, yet it maintains some of the flavor of its beginnings.

Immigrants from southern Italy began arriving in the Tacony section of Northeast Philadelphia in the early 1900s, attracted by the various industries then located along the State Road corridor, which have since disappeared. It was a close-knit group. Many of the newcomers were relatives coming to America to join with their aunts, uncles and brothers and sisters who were the pioneers.

Because virtually all of these new Americans had limited English skills, as Catholics they needed a place where Mass could be celebrated in Italian.

In those early years, according to an extensive parish history prepared by Antoinette Benincasa, whose family roots go back to the parish’s beginning, Masses were first celebrated in Italian at nearby St. Vincent’s Orphan Asylum by Father Cosmo Bruni, the pastor of Mater Dolorosa Parish in Frankford.

Interestingly, St. Vincent’s was the womb for three distinct parishes in the Tacony area. The orphanage itself was built in 1856 by the German parishes in Philadelphia. Local German Catholic families worshiped there because it had German liturgies.

This congregation remained until 1924 when St. Hubert’s, a German national parish, was founded on Torresdale Avenue. It was short-lived for several reasons and in 1940 was converted into St. Hubert High School, which it remains to this day.

Meanwhile back in those early days other area Catholics, especially Irish, were also worshipping at St. Vincent’s. Because the chaplain would not celebrate a Mass with the vernacular parts in English, they petitioned for a parish, and St. Leo’s was founded in 1884. It continued as a parish until it was absorbed into Our Lady of Consolation in 2013.

The Italian Catholics only remained at St. Vincent’s until 1917, when Archbishop Edmond Prendergast consented to the erection of Our Lady of Consolation Parish. The founding pastor was Father Alfredo Procopio, who was himself a native of southern Italy.

He immediately purchased a lot at Wellington and Edmund streets and quickly built a pretty little church. Surviving pictures suggest it was the lower part of what was intended eventually to have upper and lower churches.

But 10 years later the next pastor, Father Angelo Angelini, purchased ground at Princeton and Edmund Streets and erected a three-story school building with Mass celebrated on the first floor.

The reasons may be easily explained. Many parishes back then did build their church in stages, with the main upper sanctuary later.

But by the time Father Angelini arrived Cardinal Dennis Dougherty was Archbishop of Philadelphia and in his administration it was a general policy that parishes in Philadelphia could not build a permanent church until a school was up and paid for.

Hence the change of location at least temporarily to a school building with Mass facilities.

A new school, the Depression and years of debt

The new building was blessed in 1928 just a year before the onset of the Great Depression. The parish debt was $145,000, a huge sum at the time and succeeding pastors struggled to cope with it.

Father James Rosica arrived as the fifth pastor in 1933, a very young man at 26, just one year ordained. Part of his task was to determine if the parish was really viable and could it be saved. His answer, through action, was a resounding yes. He remained 37 years, and is still beloved in memory.

“He was full of enthusiasm and related to the people,” Benincasa said. “He knew everybody, came to everything and always handed out the report cards in school. He also had a gift of training young priests who would be assigned to the parish.”

Father Rosica was succeed by Father (later Msgr.) Arthur Centrella who served for 19 years and who had the distinction of making the parish debt free for the first time it its history.

During the years of Father Rosica and Msgr. Centrella many social programs flourished, including twice-weekly parish dances, which Benincasa estimates resulted in at least 100 marriages of couples who met at the dances.

It was also the heyday of the huge Feast of the Seven Saints, which was the largest money raiser for the parish, part religious procession and part street fair. It still continues, slightly modified, with St. Leo the Great joining the procession.

The school for most of its history was conducted by the Sisters of St. Francis, and Benincasa especially members Sister Cecil Gabriel and Sister Ramona as outstanding.

One Sister of St. Francis that still remains connected to the parish is Sister Linda Sariego, who attended the school herself and is now the parish organist.

Although it never was a large school, it outlasted many of the mega-schools in the archdiocese, finally closing its doors in 2012.

‘Parish was the center of our lives’

There were a number of young graduates of Our Lady of Consolation who ultimately entered the priesthood. Most notable among them is Bishop Joseph Cistone, now Bishop of Saginaw, who returned to celebrate the 100th anniversary Mass.

“Our Lady of Consolation is my home parish,” Bishop Cistone commented. “I received all my sacraments there, celebrated my first Mass as a priest there and, the day after being consecrated a bishop, I returned to OLC to celebrate my first Mass as a bishop.

“Our Lady of Consolation, together with my parents, was the source and nourishment of my faith and my priestly vocation. When I was growing up, the parish was the center of our lives: sports, dances, carnivals, processions and many other religious and community-building activities.

“The parishioners did not only attend Mass on Sundays, they took ownership of the parish, working hard together to support parish functions and a flourishing grade school. We were blessed with good, dedicated priests whose example of priestly ministry was an inspiration for my own priesthood and what the Sisters of St. Francis of Glen Riddle instilled within us.”

Because the congregation at Our Lady of Consolation is no longer Italian immigrants there has not been a scheduled Italian Mass in years. On the other hand there is an archdiocese-sanctioned weekly Latin Mass in the Extraordinary Form that draws a small congregation of Catholics from around the diocese who prefer the old-style Mass.

In the year 2012, before the merger of the two parishes, the October count of Mass attenders stood at exactly 800 for the two parishes. The next year, post-merger it dropped by 101, something that is not unusual in merger situations.

Surrounding parishes did show a temporary uptick in Mass attendance that year which suggests some opted for a different parish. Attendance numbers have continued to fall at a lesser rate and last year stood at 540.

Baptisms last year numbered 44 compared to 53 funerals, not a bad ratio in a city parish because so many young couples leave for the suburbs.

Of those baptisms 13 had Italian surnames, 13 had Hispanic surnames and the rest mostly other European surnames. What really stands out is the Hispanic surnames, mostly of families from Puerto Rico or the Dominican Republic. A decade ago there was no Hispanic presence in the parish, and it was a conscious decision to host a Spanish-language Mass, because of the growing Hispanic population of the area.

Pascual Mota, who is from the Dominican Republic, was baptized but never received his other sacraments until he was received through the RCIA program at Our Lady of Consolation in 2013. Now he is starting fourth year of the permanent deacon program at St. Charles Seminary. If all goes well he will become Our Lady of Consolation’s next permanent deacon.

“We have a lot of weddings and baptisms and kids in catechism,” he said. “We get 100 to 115 (people) for Mass with Father Vargas and sometimes Father (Francis) Sariego,” Mota said. “They come from all over, very few are in the parish boundaries. They all have the same story — they went to different places, then came here and they love it. Father Farrell has been outstanding to us.”

Scott Adair, who is a member of both the Parish Pastoral Council and the Finance Council, is also a former member of St. Leo Parish who worships at both sites, depending on the hour. While like other St. Leo parishioners it was his hope that the parish would survive, he accepts the change.

“I truly believe in the process,” he said. “We can still do good things and be part of the community. The culture has to change its thinking when there is a merger.”

Right now St. Leo Church, through one English Mass that is relatively well attended and the Spanish Mass each Sunday, generates about 40 percent of the Our Lady of Consolation Parish income, Adair estimates. The main expenses are the church itself and half the salary of Father Rafael Vargas, who divides his time between St. Martin de Porres and the Hispanic community at the former St. Leo.

What is striking about the above parishioners is that while Benincasa can trace her family roots to the founding of Our Lady of Consolation, Adair and Mota are both relatively recent fruits of the St. Leo RCIA program, which speaks well for the importance of RCIA in all parishes.

Father Joseph Farrell, who was pastor of St. Leo at the time of the merger, remains as pastor of newly combined Our Lady of Consolation Parish.

“The parish has a strong spirituality and there is a great devotion to the saints,” he said. “St. Leo and the Spanish language Mass have certainly enhanced the parish.”

It seems probable the St. Leo worship site will ultimately close. Everything takes time. Our Lady of Consolation, if it is God’s will, may celebrate 125 years in 2042.

The Church in Tacony has seen many changes. Germans, Irish, Italians have all come through, and who knows the future? Right now the only Mass with a quantity of children is the Spanish Mass. Is that the future?

It doesn’t really matter, since we are all God’s children.

NEXT: Catholics, Lutherans take over a street in show of unity