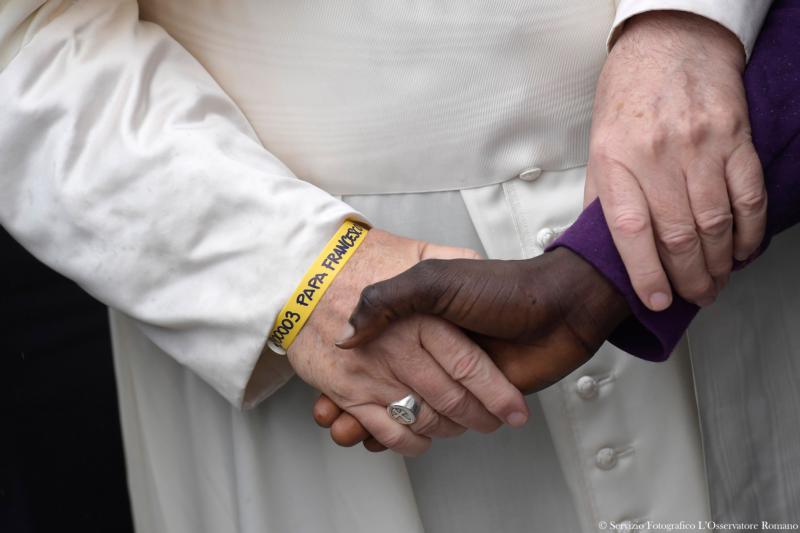 Pope Francis clasps hands with a person at the “Regional Hub,” a government-run processing center for migrants, refugees and asylum seekers, in Bologna, Italy, Oct. 1. The pope is seen wearing a yellow ID bracelet with his name and a number, just like the immigrants and refugees at the center. (CNS photo/L’Osservatore Romano)

VATICAN CITY (CNS) — Politics as service to the common good and the need to create spaces where citizens and migrants can meet and overcome fear were topics Pope Francis repeatedly returned to Sept. 30 and Oct. 1.

Arriving in Bologna mid-morning Oct. 1, Pope Francis went directly to the “Regional Hub,” a government-run processing center for migrants, refugees and asylum seekers. He was given, and wore, a yellow ID bracelet with his name and a number, just like the migrants and refugees there wear.

Just four days after he kicked off Caritas Internationalis’ “Share the Journey” campaign to encourage Catholics to meet a migrant or refugee and listen to his or her story, Pope Francis told the 1,000 people at the hub, “Many people don’t know you and they’re afraid.”

The fear “makes them feel they have the right to judge and to do so harshly and coldly, thinking they see clearly,” the pope said. “But it’s not true. One sees well only up close, which gives mercy.”

“From far away, we can say and think anything, like easily happens when they write terrible phrases and insults on the internet,” the pope said.

But, he told them, “if we look at our neighbor without mercy, we run the risk of God looking at us without mercy.”

Pope Francis, after shaking hands with each of the migrants and refugees, said he saw “only a great desire for friendship and assistance.”

The integration of newcomers begins with knowing one another, he said. “Contact with the other leads to discovering the ‘secret’ that each person carries and also the gift that he or she represents.”

“Each of you has your own story,” he said, and “this story is something sacred. We must respect it, accept it and welcome it, and help you move forward.”

“Do you know what you are?” the pope asked them. “You are fighters for hope!”

Too many of their peers never made it to Europe’s shores because they died in the desert or in the sea, he said. “People don’t remember them, but God knows their names and welcomes them to him. Let’s all take a moment of silence, remembering them and praying for them.”

Pope Francis had begun his Sunday early, arriving shortly after 8 a.m. in Cesena to mark the 300th anniversary of the birth of Pope Pius VI.

Meeting the public in the main square of the city of 97,000 people, Pope Francis focused on the obligations of both citizens and politicians in working together for the common good.

Cities and nations need “good politics,” which is a form of governance not enslaved to “individual ambitions or the highhandedness of factions,” he said. Authentic politics promotes collaboration and requires a balance of courage and prudence.

It “increases people’s involvement, their progressive inclusion,” he said, and it “does not leave any category at the margins” nor does it “sack and pollute natural resources — these, in fact, are not a bottomless well but a gift given by God for us to use with respect and intelligence.”

The social teaching of the Catholic Church sees politics, when motivated by concern for the common good, to be “a noble form of charity,” he said.

Being a good politician means carrying a cross, he said, “because many times he or she must set aside personal ideas and take up the initiatives of others, harmonizing and combining them so that it really will be the common good that is promoted.”

A good politician, he said, must be morally upright, patient and strong enough to live with the fact that very little will be perfect.

“And when the politician errs,” he said, he or she should be strong enough to say, “‘I made a mistake, forgive me.’ And go forward. This is noble.”

The pope had spoken about politics and immigration the previous day as well, meeting at the Vatican with mayors and other members of Italy’s national association of municipalities.

Pope Francis urged them to oppose “one-way streets of exasperated individualism” and “the dead ends of corruption,” as well as cities that move at two speeds: the express lanes of the rich and privileged and the barely passable alleys of “the poor and unemployed, large families, immigrants and those who have no one to count on.”

Cities should not be raising walls or towers, he said, but enlarging public squares, giving each person space and helping them “open to communion with others.”

“I understand the discomfort many of your citizens feel with the massive arrival of migrants and refugees,” the pope told the mayors, many of whom lead cities and towns that have welcomed hundreds of people.

The fear, he said, “finds its explanation in an innate fear of the ‘stranger,’ a fear aggravated by the wounds of the economic crisis,” but also by a lack of careful preparation for welcoming so many people throughout the country.

“This discomfort,” the pope said, “can be overcome by offering spaces for personal encounter and mutual knowledge. So welcome all those initiatives that promote the culture of encounter, the exchange of artistic and cultural riches and knowledge about the homes and communities of origin of the new arrivals.”

NEXT: Defend life, care for creation and give freely, pope says