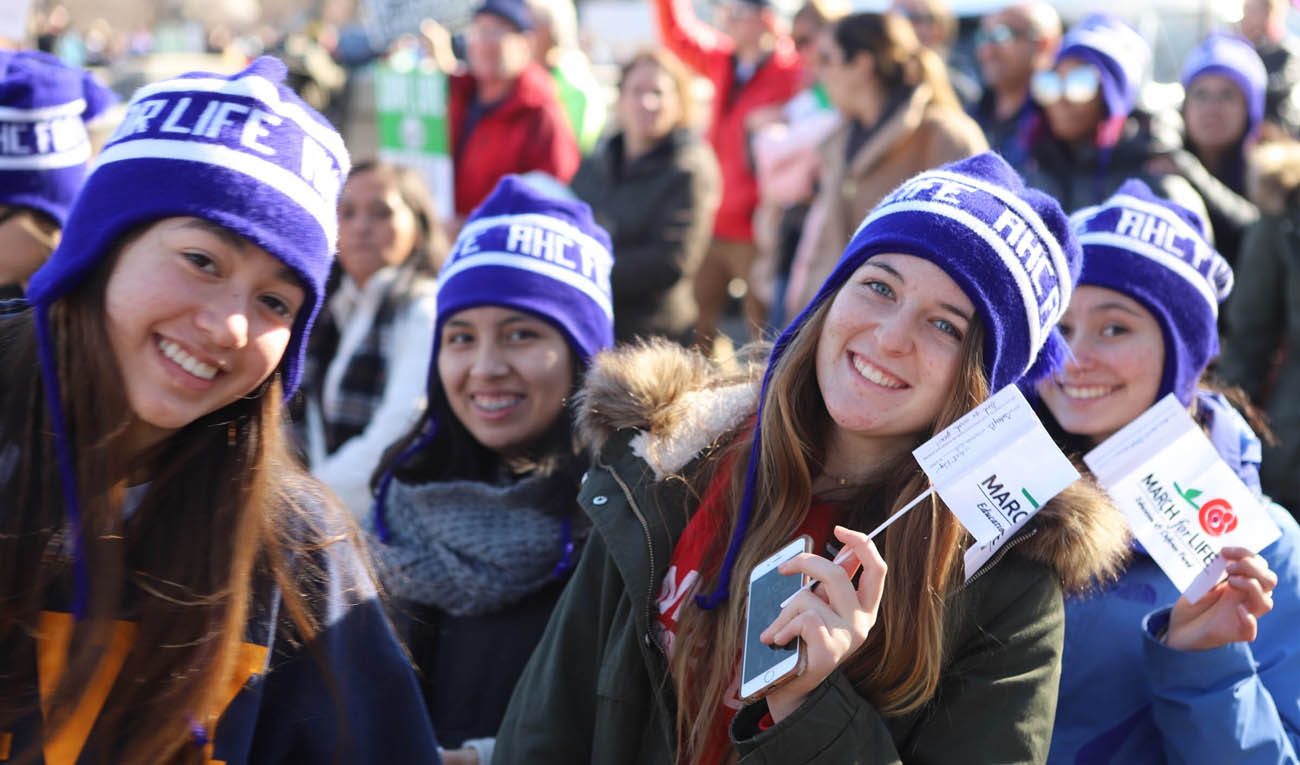 Surrounded by thousands in the heart of Washington for the annual March for Life, a majority of them young people like himself, the 26-year-old Krause searched the crowd for a McGill-Toolen Catholic High School banner, a sign for his Mobile, Alabama, group.

The annual trip to the nation’s capital for the group helps students grasp the reality and immensity of the abortion issue, Krause said.

“To see … that it’s more than just something you’ve heard in class,” he said. “Yes, it’s not just you. It’s not just McGill. It’s not just your parish, your grade school, your family. To come here to D.C., I think, really helps that for them to say, ‘Oh, this is almost a universal thing.’ This is something that’s not just from people in Alabama or Mobile. It really is, it’s nationwide. It’s worldwide. It’s about speaking truth and telling truth.”

Krause was inspired by House Speaker Paul Ryan’s call to speak with compassion, a message he felt was good for his students to hear. The Catholic congressman from Wisconsin was among the many speakers who addressed the March for Life crowd Jan. 19, before the march along Constitution to the Supreme Court.

Those involved in abortion, euthanasia or other life issues “are our brothers and sisters in Christ and we’re called to treat them with love,” he said. “It takes time for (the students) to grasp, but it surprises you how well they do grasp it.”

Seeing his students stand up for life, to see abortion as not a woman’s issue, but a human rights issue, is a “beautiful witness,” the 26-year-old told the Texas Catholic Herald, newspaper of the Archdiocese of Galveston-Houston and one of several news outlets covering the annual event.

He’s motivated by “just seeing how vigilant young people are to stand up for this social issue. That we’re here with thousands upon thousands, thousands of people and many of them are young and that their voice matters as well. Not only does their voice matter, but they have a loud and powerful voice.”

For Carlos Cerda, president of the student pro-life group Crusaders for Life at Strake Jesuit, making that witness is an obligation.

“I just feel that my generation has become the generation of waste,” the high school senior said. “It just seems to think that everything is disposable, and it’s even moved on to human life.

“I think that battling against that, showing the truth of the dignity of the unborn,” he continued, “it’s especially tough to communicate to younger people who have been fed perspectives on the issue that’s kind of twisted and not really accurate.”

Showing the truth and dignity of the unborn is “just doing what Christians called to do,” said Jenna Salazar, president of the Celts for Life student pro-life club at the University of St. Thomas in Houston.

“If anyone came that just didn’t believe that young people cared about being for life, they would be astounded to see the number of young people,” she said. “Middle school, high school, college, young adult life. It’s really, really great, and a lot of people don’t see that and they want to tell millennials to just stop talking ’cause they think that we don’t know what we’re talking about. And it’s unfortunate.”

While the trend is young people being less religious and politically identified, she’s seen millennials like herself respond more positively to science and technology in understanding the dignity of the unborn and the struggles of women facing crisis pregnancy.

“It’s more than bumper-sticker slogans,” she said. “Oftentimes millennials, we are the ones getting abortions right now.”

Yet, she sees, like in generations past, “everybody wants to be a revolutionary … to be the Martin Luther Kings and the Harriet Tubmans,” she said. “I think a big part of it, is striving for a culture free from violence. That is the noble thing to do. And it’s bizarrely hard these days.

“Pro-life is viewed as oppressive and anti-woman,” Herndon-De La Rosa added. “We have to fight against that because ultimately, what we are trying to do is to protect the oppressed humans.”

Andrew Schaeperkoetter, a 31-year-old theology teacher at Houston’s Strake Jesuit, said the hardest thing about being young and pro-life are “the caricatures that are thrown around, that the pro-life movement doesn’t care about women, the pro-life movement doesn’t want to help,” which he said distraction from the message that “we love these women, we want to help these women.”

Schaeperkoetter, who lost his home when Hurricane Harvey flooded his family home with almost a foot of rainwater and still lives out of suitcases, said he’s excited by seeing his students’ eager participation.

“It’s warmed my heart as a married man as we try to grow our family,” he said. “The pro-life movement, it takes a different air when you’re an adult than as a child, or not a child, but college student.”

Schaeperkoetter said it’s not a vacation either, and a trip that has a cost and sacrifice, “but it’s important enough for them to make this witness” and understand the need for a “more consistent and more rich life ethic.”

NEXT: Brownback OK’d as ambassador-at-large for international religious freedom