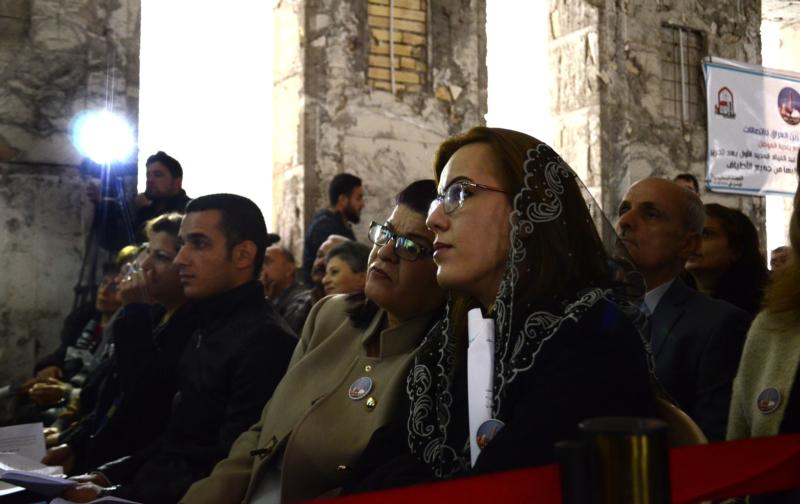 MOSUL, Iraq (CNS) — Cries of joy and seasonal hymns once again filled St. Paul Cathedral in Mosul as Christmas Mass was celebrated there for the first time in three and a half years, following the northern Iraqi city’s liberation from Islamic State militants.

The Iraqi national anthem opened the Mass as women wailed with emotion. Armored police outside protected the worshippers.

Led by Chaldean Patriarch Louis Sako of Baghdad, Christians and Muslims attended the Christmas Mass Dec. 24 in a display of unity.

“My message is to our brothers the Muslims,” said Patriarch Sako. “I ask them to change their way of thinking; you should know Christianity better. In the past, Christians were the majority in Iraq; today we are minority, but without us, Mosul will never be the same.”

He urged the faithful to pray for “peace and stability to reign in Mosul, Iraq and the world.”

Underscoring Christ’s message of love and peace, he urged displaced Christians to return home and participate in its reconstruction.

“They are not going back because their houses are destroyed or burned, and the church is restoring all of the houses,” Patriarch Sako said. “We are hopeful that many, many Christians will be back.”

Islamic State militants had seized and terrorized Mosul and the surrounding areas in 2014, sending most of its Christian population of 200,000 into flight. The militants threatened the Christians, telling them to convert to Islam, pay protection tax, die or flee.

When Islamic State militants invaded Mosul, they prohibited public Christian worship services and began systematically destroying churches. St. Paul Cathedral reportedly was used as a prison by the militants, the damaged interior walls reflecting some of the destruction.

“With this celebration, we tell them that residents of Mosul are all brothers, whatever their religion or ethnicity, and despite all the damage and suffering,” Christian worshipper Farqad Malko said of the message to the militants.

Meanwhile, in the Ninevah Plain town of Telaskov, Christians celebrated Christmas by gathering for Mass at the newly renovated Church of St. George. In church, children dressed in Santa Claus costumes sang “Jingle Bells” in Aramaic, the language of Jesus.

Twenty miles north of Mosul, Telaskov is one of the oldest continuing Christian communities in the world.

NEXT: Vatican agency says at least 23 church workers killed in 2017